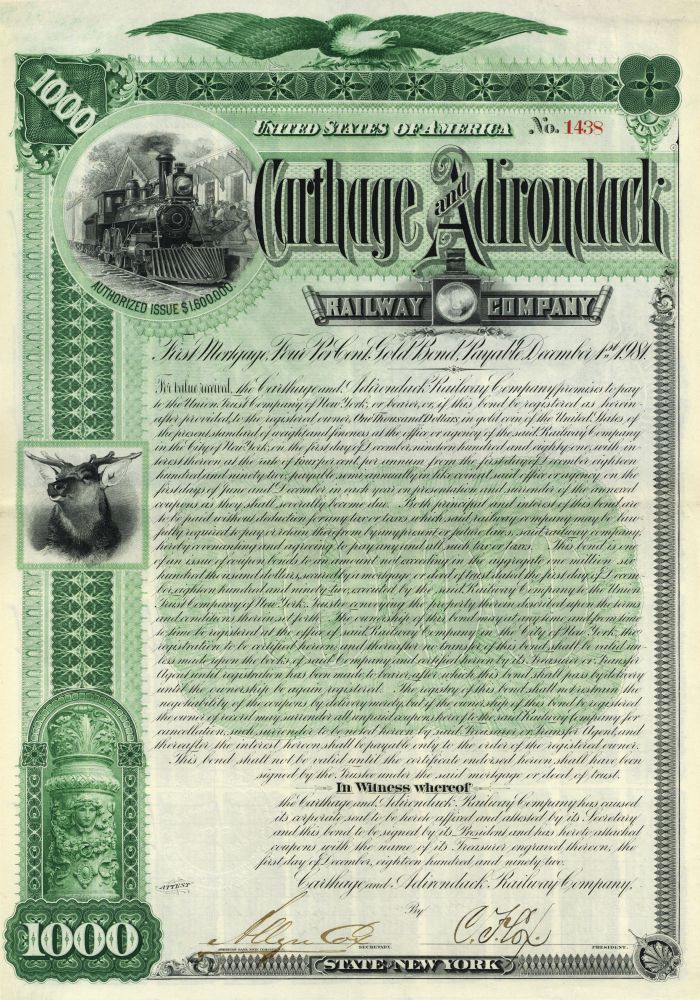 The Black River and St. Lawrence Railway was a historic railroad in New York. Its history can be traced to 1866 when George Gilbert of Carthage, New York received a charter to build a railroad from Carthage in Jefferson County to the Oswegatchie River, at or near Harrisville, in Lewis County. Preliminary surveys began in the fall of 1866. It was incorporated on June 30, 1868. The company was organized as the Black River and St. Lawrence Railway. Construction was contracted to the Row, Fields & Co., of Brockville, Ontario.

Construction began on April 29, 1869 and continued through October, and resumed in 1870. Iron was quite expensive at the time, and the railroad was constructed with wooden rails. In 1882, The New York state Railway Commission report noted that the railway was not in operation, and that the original wooden rails had been removed. Its locomotive was a 16-ton 0-4-0 w/4 wheel tender built September 1869 by the Smith & Porter Locomotive Works in Pittsburgh, Penna. c/n 50. It burned wood and had fancy (possibly gold & white) striping around the red tender tank which carried the name "PIONEER" on its sides. "B.R.& St.L.R.R." was lettered in the fancy elongated oval panel under the cab window.

The stack was of a funnel shape. The tender had a 120" frame with a 112" tank and 33" wheels for wood rails, and arrived in August 1869. There is a builder photo in the Harold K. Vollrath Collection. The company was reorganized as the Carthage and Adirondack Railway in the spring of 1883 after a mine owner in Jayville acquired the Black River and St. Lawrence Railway. He planned to extend the rails from Little River in St. Lawrence County to Jayville. Construction of the extension was completed in 1889.

Jayville was a hamlet located in the southwest part of St. Lawrence County, New York, in the United States. The hamlet started as a mining community in 1850 on what eventually became the Carthage and Adirondack Railroad. Its existence was short lived as its non-favorable mineral composition and difficult ore availability was abandoned in favor of neighboring Benson Mines, located 14 miles (23 km) down the railroad to the east. After mining stopped in the community, other industries such as saw mills kept the population busy. Ultimately, these business were short lived. A further attempt to reopen the mines in 1914 failed and an eventual fire ended the existence of the hamlet of Jayville. Today remnants of the hamlet can be found off the now abandoned railroad station located on New York State owned land southeast of Harrisville on Jayville Road.

1850-1880: According to old reports, the Jayville property was opened for iron ore in 1854 by Z.H. Benton. Little ore was removed at that time. In 1886, upon completion of the Carthage and Adirondack Railroad to Jayville, the property was leased from Beton by the Bryon D. Benson interest. Operation by the Bensons, under the name of the Magnetic Iron Ore Co, continued to 1888, in which year the property was abandoned in favor of the deposit at Little River (now Benson Mines)

1880s: One of the most significant events if Jayville history was in 1884 when New York State commissioned the building of the Carthage and Adirondack railroad to run from Carthage to Jayville. This railroad was completed in 1887. Later in 1889 the railroad was continued to Benson Mines.

Mining thrived in the 1880s. Prior to 1889, the Megnetic Iron Ore Company had expended a large amount of money in building a railroad to the mines at Jayville, NY, developing them and securing the property at little river, before it was finally discovered that ore of good quality, in its natural state, could not be taken from the mines in paying quantities. It was therefore decided by the company that the only thing to be done, to save the investment in these properties, was to establish a large concentrating plant at Little River  now Benson Mines  and to extend the railroad to that point.

1890s: During the 1890s sawmills were opened in the hamlet of Jayville. Sawmills ultimately replaced the mining activity in Jayville. In 1892, costly litigation over mineral rights and railroad tariffs that traveled through private land owned by Proctor (Proctor vs Benson) ultimately stopped mining in the hamlet.

Throughout the 1890s and through the early 1900s, Jayville remained in existence surviving on Railroad traffic and saw mill industries.

1900s: In 1914, the mines were attempted to be reopened; however this attempt was short lived and activity in the hamlet slowly wound down to its eventual demise in history Mr. Howard Hughes bought the mines property and sunk a lot of money pumping the water out of the old pits. He operated at a loss for about 3 years and then closed them. The mother load of ore hiding under Twin Ponds was the goal, but water kept seeping in and filled them as fast as they could be pumped out.

1940s: In 1941 the Jones & Laughlin Steel Corp made geologic, dip-needle and Hotchkiss superdip surveys of the area on a scale of 1:600 and drilled eight inclined holes whole total length was 2,366 feet. Most of the diamond-drill holes were 200 to 250 feet deep, but several were 350 to 450 deep. As a result of this exploration, the company concluded that the property was of little interest as a potential producer of lump ore.

As was customary for the times a telegrapher was stationed at Jayville. The position of telegrapher was a union job, organized in New York State under the Order of Railroad Telegraphers. In 1913 it was noted that Brother Seamen was the telegrapher for the hamlet.

As published by the Rand-McNally in 1902, there were three trains that ran through Jayville. (437,487,451) The train schedule was published by the New York Central & Hudson Railroad and posted under the Carthage and Adirondack Branch.