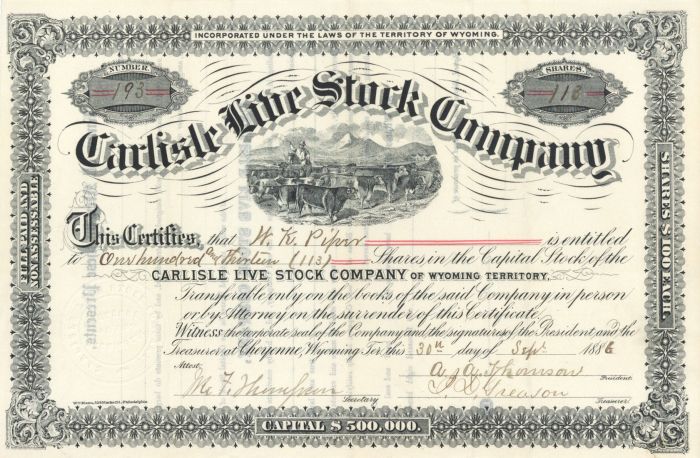 Stock printed by Wm. Mann, Philadelphia. Incorporated in the Territory of Wyoming.

Cheyenne is the capital and most populous city, with 65,132 residents, of the U.S. state of Wyoming. It is the principal city of the Cheyenne metropolitan statistical area which encompasses all of Laramie County and has about 100,000 residents. Local residents named the town for the Cheyenne Native American people in 1867 when it was founded in the Dakota Territory.

Cheyenne is the northern terminus of the extensive Southern Rocky Mountain Front, which extends southward to Albuquerque, New Mexico, and includes the fast-growing Front Range Urban Corridor. Cheyenne is situated on Crow Creek and Dry Creek.

At a celebration on July 4, 1867, Grenville M. Dodge of the Union Pacific Railroad announced the selection of a townsite for its mountain region headquarters adjacent to the bridge the railroad planned to build across Crow Creek in the Territory of Dakota. At the same celebration, Major General Christopher C. Augur announced the selection of a site three miles (5 km) west of Crow Creek Crossing for a U.S. Army fort to protect the railroad.

The Union Pacific Railroad platted its Crow Creek Crossing townsite on July 5, 1867. Residents named the town Cheyenne for the Cheyenne Native American people. On August 8, 1867, the Town of Cheyenne, Dakota Territory was incorporated, and on August 10, 1867, H. M. Hook was elected as Cheyenne's first mayor. The tracks of the Union Pacific Railroad reached Cheyenne on November 13, 1867, and the first train arrived the following day. Cheyenne grew so quickly it gained the nickname of "Magic City of the Plains".

On July 25, 1868, the United States organized the Territory of Wyoming. Territorial Governor John Allen Campbell arrived in Cheyenne on May 7, 1869, and named Cheyenne the temporary territorial capital. Cheyenne has remained the only capital of Wyoming. On December 10, 1869, the first session of the Wyoming Territorial Legislature met in Cheyenne. That day, the legislature passed and Territorial Governor Campbell signed an act to re-incorporate the Town of Cheyenne, Wyoming Territory, and an act granting white women the right to vote, the first U.S. state or territory to grant suffrage to women.

On July 10, 1890, the Territory of Wyoming was admitted to the Union as the State of Wyoming. The Wyoming State Capitol was constructed between 1886 and 1890, with further improvements being completed in 1917.

The Cheyenne Regional Airport was opened in 1920, initially serving as a stop for airmail. It soon developed into a civil-military airport, serving DC-3s and various military craft. During World War II, hundreds of B-17s, B-24s, and PBYs were outfitted and upgraded at the airfield. Today, it serves a number of military functions, as well as a high-altitude testbed for civilian craft.