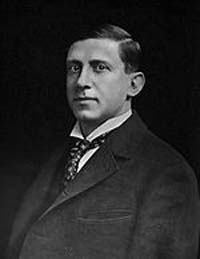 Charles Michael Schwab (February 18, 1862  September 18, 1939) was an American steel magnate. Under his leadership, Bethlehem Steel became the second largest steel maker in the United States, and one of the most important heavy manufacturers in the world. Schwab began his career as an engineer in Andrew Carnegie's steelworks, starting as a stake-driver in the engineering corps of the Edgar Thomson Steel Works and Furnaces in Braddock, Pennsylvania. He was promoted often, including to the positions of general superintendent of the Homestead Works in 1887 and general superintendent of the Edgar Thomson Steel Works in 1890. In 1897, at only 35 years of age, he became president of the Carnegie Steel Company. In 1901, he helped negotiate the secret sale of Carnegie Steel to a group of New Yorkbased financiers led by J. P. Morgan. After the buyout, Schwab became the first president of the U.S. Steel Corporation, the company formed out of Carnegie's former holdings. After several clashes with Morgan and fellow US Steel executive Elbert Gary, Schwab left USS in 1903 to run the Bethlehem Shipbuilding and Steel Company in Bethlehem, Pennsylvania. The company had gained shipyards in California, Delaware, and New Jersey through its brief but fortunate involvement as one of the few solvent enterprises in United States Shipbuilding Company. Under his leadership (and that of Eugene Grace), it became the largest independent steel producer in the world. A major part of Bethlehem Steel's success was the development of the H-beam, a precursor of today's ubiquitous I-beam[dubious  discuss]. Schwab was interested in mass-producing the wide flange steel beam, but that was a risky venture that required raising capital and building a large new plant, all to make a product whose ability to sell was unproven. In his most famous remark, Schwab told his secretary, "I've thought the whole thing over, and if we are going bust, we will go bust big." In 1908, Bethlehem Steel began making the beam, which revolutionized building construction and contributed to the age of the skyscraper. Its success helped make Bethlehem Steel the second-largest steel company in the world. Bethlehem, Pennsylvania was incorporated, virtually as a company town, by uniting four previous villages. In 1910, Schwab broke the Bethlehem Steel strike by calling out the newly formed Pennsylvania State Police. Schwab successfully kept labor unions out of Bethlehem Steel throughout his tenure (although Bethlehem Steel unionized in 1941, two years after his death). In 1911, Bethlehem Steel formed a company soccer team known as Bethlehem Steel F.C. In 1914 Schwab took the team professional. Until its demise in 1930, the team won eight league championships, six American Cups and five National Challenge Cups. It was considered among the greatest soccer teams in U.S. history. The company disbanded the team as a result of financial losses incurred during the internecine 19281929 "Soccer Wars" between American Soccer League and United States Football Association and the onset of the Great Depression in 1929. During the first years of World War I, Bethlehem Steel had a virtual monopoly in contracts to supply the Allies with certain kinds of munitions. Schwab made many visits to Europe in connection with the manufacture and supply of munitions to the Allied governments, during this period. He circumvented American neutrality laws by funneling goods through Canada. On April 16, 1918, Schwab became Director General of the Emergency Fleet Corporation, a board granted by Congress with master authority over all shipbuilding in the United States. He was appointed over Charles Piez, the former general manager of the corporation. President Wilson had specifically asked Schwab to assume this responsibility. Schwab's biggest change to the shipbuilding effort was to abandon the cost plus profit contracting system that had been in place up to that time and begin issuing fixed-price contracts. After America's entry into the war, he was accused of profiteering but was later acquitted. Schwab was considered to be a risk taker and was highly controversial (Thomas Edison once famously called him the "master hustler"). Schwab's lucrative contract providing steel to the Trans-Siberian Railroad came after he provided a $200,000 "gift" to the mistress of the Grand Duke Alexis Aleksandrovich.[citation needed] His innovative ways of dealing with his staff are given a mention in Dale Carnegie's most famous work, How to Win Friends and Influence People (1936). In 1928, Schwab was awarded the Bessemer Gold Medal for "outstanding services to the steel industry". In 1932 he was awarded the Melchett Medal by the British Institute of Fuel. In 1982, Schwab was inducted into the Junior Achievement U.S. Business Hall of Fame. In 2011 Schwab was inducted into the inaugural class of the American Metal Market Steel Hall of Fame (http://www.amm.com/HOF-Profile/CharlesSchwab.html) for his lifelong work in the US steel industry.

Condition: Excellent
Item ordered may not be exact piece shown. All original and authentic.
Email this to a friend
Request Info
Previous Item (Signed note by John M. Schermerhorn)    (Letter signed by Theodore Rossevelt) Next Item