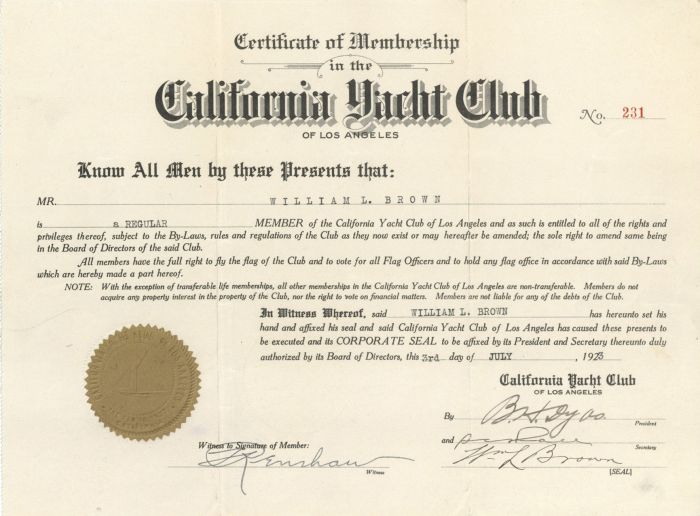 Certificate of Membership in the California Yacht Club of Los Angeles.

A yacht club is a sports club specifically related to yachting.

Yacht clubs are mostly located by the sea, although there some that have been established at a lake or riverside locations. Yacht or sailing clubs have either a marina or a delimited section of the beach or shoreline with buoys marking the areas off-limits for swimmers as well as safe offshore anchorages. On shore they also include a perimeter reserved for the exclusive use of the members of the club as well as a clubhouse with attached bar, café or restaurant where members socialize in a pleasant and informal setting.

Although the terms Yacht Club and Sailing Club tend to be synonymous, some general differences regarding the recreational use of boats can be broadly outlined. Historically a Yacht Club tended to focus on a membership composed of yacht owners, including motorboats. This type of club often was extremely exclusive, attracting the aristocracy or the high class and leaving small boat owners out of the circle. On the other hand, a Sailing Club tended to focus on a membership composed exclusively of owners of sailboats, including smaller boats such as dinghies. These became very popular towards the end of the 19th century when small boats began to be produced on an industrial scale.

Organized and run by the membership, Yacht Clubs became a place to promote the sport of sailboat racing and cruising, as well as provide a meeting place for the particular social community. The membership is a mixture of people with specific recreational affinities, and the members often include those who sail as crew for cruising or racing, as well as boat owners. Also it is up to the members decide on the objectives of the club to satisfy the membership and to attract other like-minded individuals. For example, some clubs include owners of powerboats, while others specifically exclude them. In order to overcome difficulties concerning the affinities of their members one particular club may have two sections, a sailing section and a powerboat section.

Members Clubs often have paid staff for catering, bar duty, boat yard duty, accounts, office etc. Control and organization of the club is done for the membership via members elected by the membership into roles such as Sailing Secretary, Commodore, Cruising Captain, Racing Captain etc. Smaller clubs typically have a condition of membership which requires active participation of the membership in activities such as maintenance of club facilities and equipment.

Unlike the classical clubs where the membership is the focus, certain 'clubs' are run on a commercial basis. They may be owned by individuals or a company to provide a service and generate a profit. Often they are associated with a particular marina or port. Objectives are usually broadly similar to members clubs, but the social side may be more dominant.

There is a long historical tradition behind yacht clubs. According to the date of establishment, the Neva Yacht Club, founded in 1718 in Russia, is the oldest yacht club. However, since this Russian Yacht Club was established by a decree of Tsar Peter the Great, it does not fully qualify as a proper club in the modern sense, understood as a voluntary association of members who organize and run the club. Therefore, the Royal Cork Yacht Club founded in Ireland in 1720 is also widely acknowledged as the oldest yacht club in the world, despite having gone through periods of dormancy and undergone name changes in its long history, much in the same manner as the Neva Yacht Club. It was only in 1846 that the first yacht club in Russia to adopt British-style Members Club regulations was established. Using this Western understanding of what a club or society is, the Royal Swedish Yacht Club, KSSS, founded 1830, becomes the oldest European yacht club outside the British Isles, and the fifth oldest in the world.

A number of the world's most renowned Yacht Clubs are located in the United Kingdom, Australia, Germany, Canada, and the United States. The first yacht club in North America was the Royal Nova Scotia Yacht Squadron, located on the Northwest Arm in Halifax, Nova Scotia, Canada established in July 1837. Some yacht clubs are affiliated with an international body, the International Council of Yacht Clubs, which exists to improve the quality of the services yacht clubs provide to their members as well as to promote environmental awareness and responsibility towards the environment.

The Kieler Yacht-Club in Northern Germany organizes the yearly Kiel Week, the second-biggest sailing event in the world, that is celebrated since 1882. Kiel Week was an attempt to imitate the much older and larger Cowes Week, long-admired by Wilhelm II.

Most clubs, regardless of the size of their craft, have a well defined racing program. Clubs may host regattas ranging from informal local events to national championships. Often clubs have a regular weekday evening racing schedule or a weekend racing schedule organized by the membership. Many yacht clubs field teams to compete against other clubs in team racing. There are also some specific boat models and lengths which have their own club. These boat ownership clubs often hold single design races for their members. With the growth of sailing at secondary schools and universities many yacht clubs host Interscholastic Sailing Association or Intercollegiate Sailing Association regattas. Additionally, a number of yacht clubs enter into agreements with schools to provide dock space and practice facilities for the school teams year-round.

Members belonging to a yacht club or sailing organization may fly their club's unique flag (usually triangular), called a burgee, both while under way and at anchor (however, not while racing). Traditionally, the burgee was flown from the main masthead, however it may also be flown from a small pole on the bow pulpit, or on the starboard rigging beneath the lowest starboard spreader on a flag halyard. Some traditional clubs have also been granted the right to fly a special yacht ensign at the stern.

At traditional clubs the burgee and the ensign is hoisted at 08:00 each morning and lowered each evening at sunset. This ceremony is called colours. Traditionally, the first time a member of one club visits another, there is an exchange of burgees. Exchanged burgees are often displayed on the premises of clubs, such as at their clubhouse or bar.

Yacht clubs are organized like any other club or organisation with committees, chairman, directors, etc. Due to the connection with the sea and hence the navy, the various posts use naval terminology. For example, the chairman/CEO is the Commodore. Usually, under the Commodore there are also the Vice Commodore (in charge of land-based activities) and the Rear Commodore (in charge of water-based activities); for clubs in the United States they might in turn be assisted by the Port Captain and the Fleet Captain respectively. In a few clubs in the United Kingdom the Admiral, which is one rank above the Commodore, is the senior officer. Each of these ranks has specific responsibilities to ensure the smooth running of the club.

Members of yacht clubs typically gather at a clubhouse or shore station which may also have docks. The oldest yacht club in the world without a clubhouse is Sheldrake Yacht Club (Mamaroneck, New York).

The traditions and prestige normally associated with yacht clubs have to some extent been subverted or appropriated unofficially by groups and businesses calling themselves "yacht clubs". For example, the "Gowanus Yacht Club" is a beer garden restaurant in Brooklyn, NY, the Van Buren Yacht Club is a bar and hotel in Maine, the "Crystal Bay Yacht Club" is a beach resort in Ko Samui, Thailand and "The Eagle Rock Yacht Club" is a non-profit dodgeball league in Glassell Park, Los Angeles. These so-called "yacht clubs" don't necessarily involve sailing on private yachts of members as their main purpose or activity, but often outwardly maintain a nautical or water-oriented theme.

Tonkin Gulf Yacht Club was the unofficial name for the United States Seventh Fleet during the Vietnam War. In this case the term "yacht club" was appropriated with humorous intentions. The Seventh Fleet's nickname became very popular among its members at the time.

The oldest yacht clubs are:

Oldest clubs rest of the world