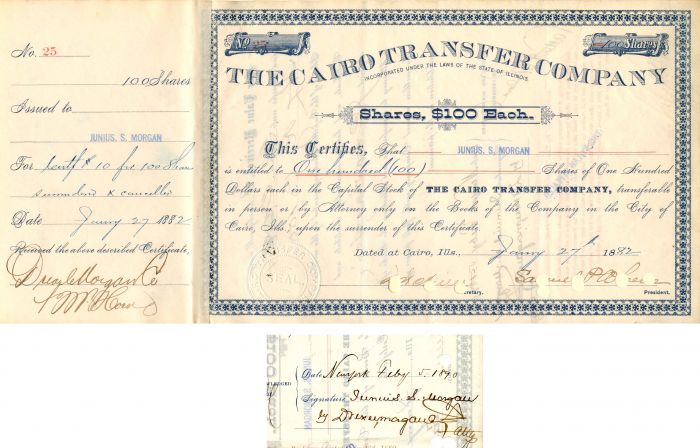 Stock issued to Junius S. Morgan, father of J.P. Morgan. Signed at back.

Junius Spencer Morgan (April 14, 1813  April 8, 1890) was an American banker and financier, born at West Springfield (now Holyoke), Massachusetts, USA. He began his business career in 1829 by entering the employ of Alfred Welles of Boston. He grew up in Hartford, Conn., where his father was a prosperous merchant with diverse business interests. Morgan entered the business world as an apprentice merchant at the age of 16 before going to New York to learn banking. He then became a partner in various mercantile firms. A trip to Europe in 1853 decisively altered Morgan's business career and life. He met George Peabody, an American in London, and was invited to become a partner in his merchant-banking firm, founded in 1852, which facilitated the flow of British capital to America. Morgan moved to London in 1854 to take up his duties as junior partner. Peabody retired a decade later, and Morgan became director of the firm, whose name was changed to J. S. Morgan and Company. He also inherited the high standing of Peabody in England, an asset of incalculable value. That and his abilities enabled him to build the firm into the most important American banking company in Europe. Morgan himself became the most influential American banker in that part of the world. Morgan met Andrew Carnegie in 1869 and in business dealings with him in 1873 was able to be helpful. He also headed a syndicate, which lent France money in 1870 to aid in the continuation of the Franco-Prussian War after a decisive French defeat. One writer has speculated that this was "possibly the greatest single coup organized by Junius Morgan  and the whole operation was a sensation in the financial world." Morgan, with his son as the manager, in 1879 sold in London a sizable block of the New York Central Railroad stock owned by William H. Vanderbilt. He financed Cecil Rhodes in the 1880s in his contest for control of the diamond market against Barney Barnato, who was supported by the banking family, the Rothschilds. Morgan died in Monte Carlo, where he usually wintered, on April 8, 1890. He can justifiably be regarded as the initiator of the house of Morgan, which was made so powerful and famous by his son, John Pierpont Morgan. In 1836, he married John Pierpont Morgan's mother, Juliet. From about 1836 to 1853, he was in the dry-goods business. He contributed money to Trinity College, Hartford. At his death, in 1890, he left a fortune estimated at about $10,000,000.