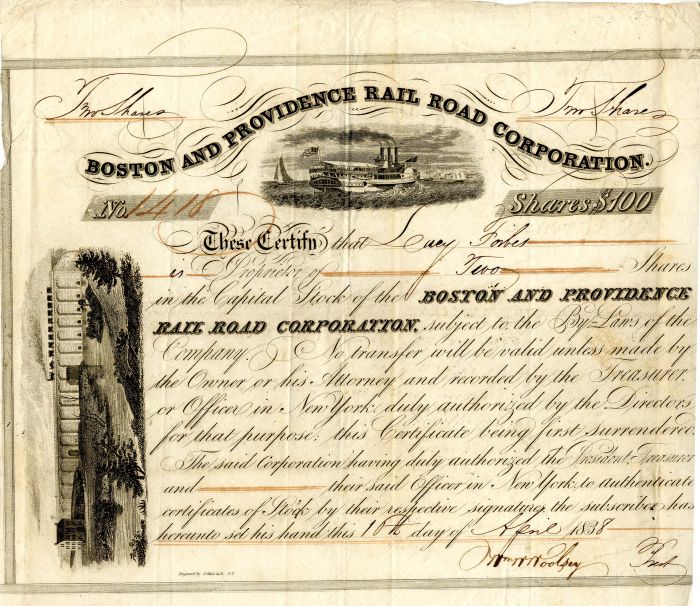 The Boston and Providence Railroad was a railroad company in the states of Massachusetts and Rhode Island which connected its namesake cities. It opened in two sections in 1834 and 1835 - one of the first rail lines in the United States - with a more direct route into Providence built in 1847. Branches were built to Dedham in 1834, Stoughton in 1845, and North Attleboro in 1871. It was acquired by the Old Colony Railroad in 1888, which in turn was leased by the New Haven Railroad in 1893. The line became the New Haven's primary mainline to Boston; it was realigned in Boston in 1899 during the construction of South Station, and in Pawtucket and Central Falls in 1916 for grade crossing elimination.

The line became part of the Penn Central system in 1969; the section in Massachusetts was purchased by the state in 1973, while Amtrak acquired the Rhode Island section in 1976. The line was electrified in 2000; it is now the far northern leg of Amtrak's Northeast Corridor, used by high-speed Acela Express service, intercity Northeast Regional service, and MBTA Commuter Rail Providence/Stoughton Line local service. The rapid transit MBTA Orange Line shares the right-of-way for several miles in the 1987-built Southwest Corridor section in Boston. The Stoughton Branch is also used for Providence/Stoughton Line service, and the northern section of the Dedham Branch is used by the Needham Line.

Construction began in late 1832. The first section, from Boston to Canton with a branch to Dedham, opened in 1834, and the rest on July 28, 1835 with the completion of the Canton Viaduct. Stations in Jamaica Plain allowed the development of one of the first commuter suburbs in America.

In 1887, the railroad's Bussey Bridge collapsed while a morning commuter train was passing over it. The train was carrying about 300 passengers at the time, of which 24 died and 125 were seriously injured. Henry Austin Whitney was the president of the railroad at the time.

Until 1899, when South Station opened, the Boston terminal was at Park Square, with a crossing at grade of the Boston and Worcester Railroad at the current merge at Back Bay station (also opened in 1899, serving only the B&P). The original Providence terminal was at Fox Point, from which it ran east along the Seekonk River shore and over the river via the India Point Railroad Bridge into East Providence (then part of Seekonk, Massachusetts) before turning north towards Boston. A ferry across the Providence River connected Fox Point to the South Providence terminal of the New York, Providence and Boston Railroad (opened 1837). The former mainline became the freight-only East Junction Branch.

When Boston's South Station opened in 1899, a new line was built along the south side of the Boston and Albany Railroad to it, near the B&A's terminal. The old line to Park Square was abandoned.

The East Side Railroad Tunnel opened in 1908 between the East Side of Providence, Rhode Island and downtown Providence. This provided a second route into Providence, using the old alignment to East Providence and the Crook Point Bascule Bridge over the Seekonk River leading to the tunnel. The tunnel is no longer in use, having been disconnected on the downtown side, with its entrance underneath the What Cheer Building, owned by RISD.

In 1939, the railroad filed with the Interstate Commerce Commission for reorganization in the New Haven rail system or operation as an independent line.

The Penn Central Transportation Company was created in 1968 through a merger that included the New York, New Haven and Hartford Railroad. The Penn Central bankruptcy in the early 1970s coincided with the creation of Amtrak. Penn Central merged the Boston and Providence Railroad into itself in 1972.

In 1973, the MBTA purchased the portion of the B&P main line in Massachusetts, including the Stoughton Branch, forming what is now the Providence/Stoughton Line. The portion in Rhode Island was sold to Amtrak in 1976.

The Easton Branch Railroad was incorporated in 1854 and opened in 1855 as a continuation of the Stoughton Branch beyond Stoughton. In 1865, the Old Colony and Newport Railway bought the line and incorporated the majority of it into its main line.

The Taunton Branch Railroad was incorporated in 1835 to build a branch from the B&P in Mansfield to Taunton, opening in 1836. The branch was operated by the B&P until 1840, when the New Bedford and Taunton Railroad opened, continuing the line past Taunton.

The Attleborough Branch Railroad opened in 1870, running from the B&P in Attleboro northwest to North Attleborough. It was leased to the B&P, and was connected to a branch of the Old Colony Railroad in 1890.

The Moshassuck Valley Railroad was chartered in 1874 and opened in 1876 as a branch from the joint B&P/P&W at Woodlawn, Rhode Island north to Saylesville. The company remained independent until 1981, when it was bought by the P&W.

The Seekonk Branch Railroad was a short spur on the east side of the Seekonk River, from the B&P south to a dock on the river. It was incorporated in 1836 and opened soon after, with the hope that it would run its own trains over the B&P, as with a highway. As a result of this, the Massachusetts State Legislature passed a law that a railroad company could refuse any traffic on its road, and the company was a failure. The B&P bought it in 1839, and the Providence, Warren and Bristol Railroad built a line from it in 1855.

The Warren and Fall River Railroad was incorporated in Rhode Island in 1856, and the Fall River and Warren Railroad in Massachusetts in 1857. In 1860 the two were merged to form the Fall River, Warren and Providence Railroad, opening later in 1860 from Warren east to Somerset, across the Taunton River from Fall River. In 1875, the Boston and Providence Railroad Bridge opened, connecting to the Old Colony Railroad in Fall River. At that time, the company was leased by the Old Colony; before that it had been controlled by the B&P.

Item ordered may not be exact piece shown. All original and authentic.
Email this to a friend
Request Info
Previous Item (Baltimore and Ohio signed by Francis Henry Baring and John, Lord Revelstoke)    (Bank of the Delaware and Hudson Canal Company signed by Francis Spinner - Stock Certificate) Next Item