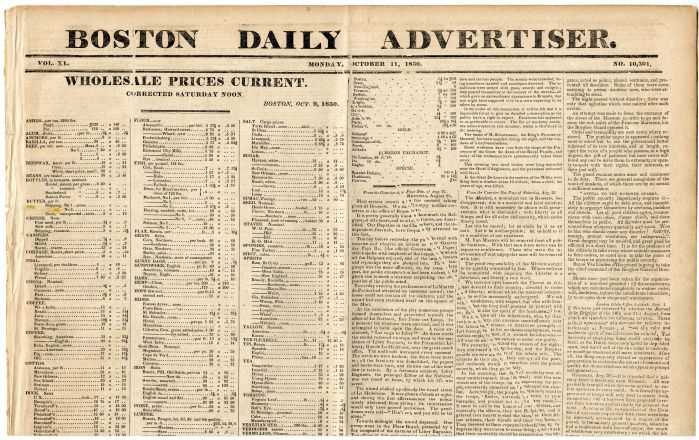 4 pages of the Boston Daily Advertiser for Monday, October 11, 1830. Some foxing. Top half of 1st page shown.

The Boston Daily Advertiser (est. 1813) was the first daily newspaper in Boston, and for many years the only daily paper in Boston.

The Advertiser was established in 1813, and in March 1814 it was purchased by journalist Nathan Hale. Hale was its chief editor until his death in 1863. Under Hale's supervision, the paper was first Federalist in politics, then Whig, and finally Republican, and it became very influential. It opposed the Missouri Compromise of 1820 and the Kansas-Nebraska Act in 1854, and was the first paper to recommend the free colonization of Kansas. The principle of editorial responsibility, as distinct from that of individual contributions, was established in its columns. From 1841 until 1853, Hale's son Nathan Hale Jr., was associated with his father in the editorial management of the paper.

In 1832 the Advertiser took over control of The Boston Patriot, and then in 1840 it took over and absorbed The Boston Gazette.

In 1885 Elihu B. Hayes took over control of the Advertiser.

The paper was purchased by William Randolph Hearst in 1917, became an illustrated tabloid in 1921, and ceased publication in 1929. Hearst continued using the name Advertiser for its Sunday paper until the early 1970s.