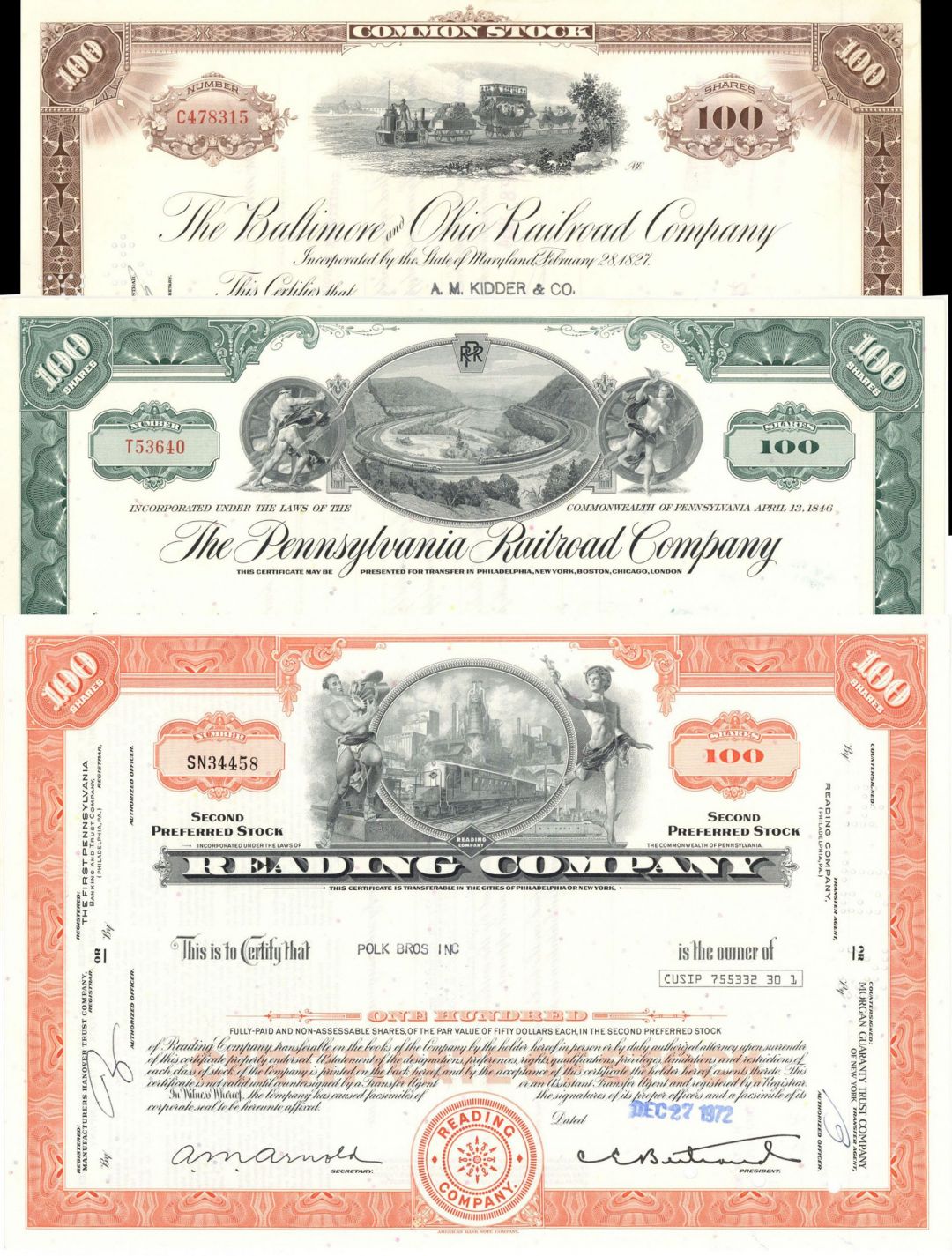 3 Important Railroad Stocks of the most popular board game ever!!! Baltimore and Ohio Railroad with "Tom Thumb" engraving, Pennsylvania Railroad with the famous "Horseshoe Curve" scene, and the Reading Company with Train artwork. Set of 3.

The Baltimore and Ohio Railroad (reporting mark BO) was the first common carrier railroad and the oldest railroad in the United States, with its first section opening in 1830. Merchants from Baltimore, which had benefited to some extent from the construction of the National Road early in the century, wanted to do business with settlers crossing the Appalachian Mountains. The railroad faced competition from several existing and proposed enterprises, including the Albany-Schenectady Turnpike, built in 1797, the Erie Canal, which opened in 1825, and the Chesapeake and Ohio Canal. At first, the B&O was located entirely in the state of Maryland; its original line extending from the port of Baltimore west to Sandy Hook, Maryland, opened in 1834. There it connected with Harper's Ferry, first by boat, then by the Wager Bridge, across the Potomac River into Virginia, and also with the navigable Shenandoah River.

The B&O owes its fame, in part, to its inclusion as one of the four featured railroads in the original version of the popular board game Monopoly; it is the only railroad on the board that did not directly serve Atlantic City, New Jersey, the city whose street names were used in the game's original edition.

By 1882, the Pennsylvania Railroad had become the largest railroad (by traffic and revenue), the largest transportation enterprise, and the largest corporation in the world. Its budget was second only to the U.S. government.

Over the years, it acquired, merged with or owned part of at least 800 other rail lines and companies. At the end of 1926, it operated 11,640.66 miles (18,733.83 kilometers) of rail line; in the 1920s, it carried nearly three times the traffic as other railroads of comparable length, such as the Union Pacific and Atchison, Topeka & Santa Fe railroads. Its only formidable rival was the New York Central (NYC), which carried around three-quarters of the Pennsy's ton-miles.

The Reading Company (/ˈrɛdɪŋ/ RED-ing) was a Philadelphia-headquartered railroad that provided passenger and commercial rail transport in eastern Pennsylvania and neighboring states that operated from 1924 until its 1976 acquisition by Conrail.

Commonly called the Reading Railroad, and logotyped as Reading Lines, the Reading Company was a railroad holding company for the majority of its existence and was a single railroad during its later years. It operated service as Reading Railway System and was a successor to the Philadelphia and Reading Railway Company, founded in 1833. Until the decline in anthracite loadings in the Coal Region after World War II, it was one of the most prosperous corporations in the United States.

Competition with the modern trucking industry that used the interstate highway system for short-distance transportation of goods, also known as short hauls, compounded the company's problems, forcing it into bankruptcy in 1971. Its railroad operations were merged into Conrail in 1976, and the rest of the corporation is now known as Reading International.