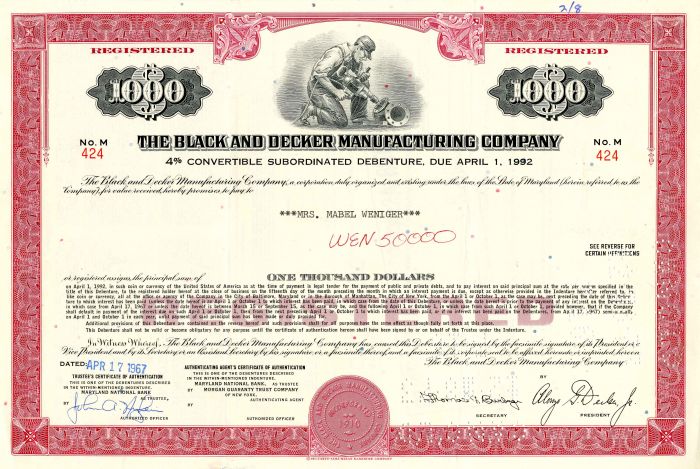 In May 2002, the company considered moving its corporate headquarters to Bermuda, but public and governmental outcry forced management to reconsider the move. By August 2002, the company had decided to maintain its incorporation in the United States.

In July 2016, CEO John F. Lundgren stepped down, with President and COO James M. Loree taking over as CEO.

Formerly a business unit (BU) within Stanley Security Solutions, this comprised Best Access Systems and several product brands that were sold to Dormakaba in 2016Q4. MAS was dissolved however the brand Sergeant & Greenleaf was retained by Convergent Security Solutions.

These were sold to Spectrum Brands in 2012.

Item ordered may not be exact piece shown. All original and authentic.
OUT OF STOCK
Request re-stock notice?
Email this to a friend
Request Info
Previous Item (City of Baltimore - Various Denominations Bond)    (Georgia Co. - $1,000 Bond) Next Item