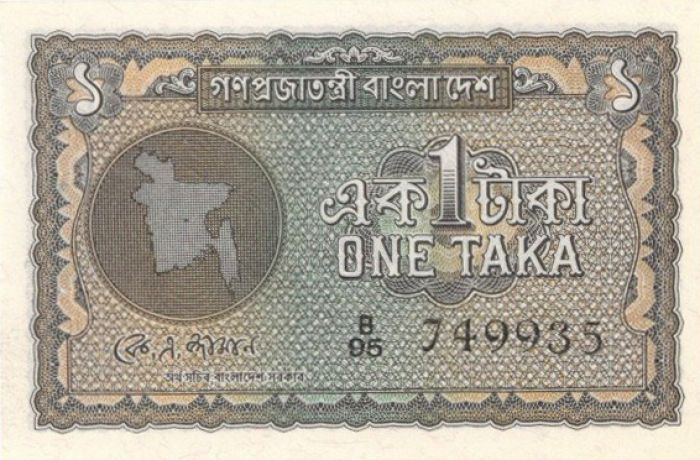 The Bangladeshi taka (Bengali: টাকা, sign: ৳, code: BDT, short form: Tk) is the currency of the People's Republic of Bangladesh. In Unicode, it is encoded at U+09F3 ৳ (HTML ৳).

Issuance of bank notes ৳10 and larger is controlled by Bangladesh Bank, while the ৳2 and ৳5 banknotes are the responsibility of the ministry of finance of the government of Bangladesh The banknotes of Tk. 2 and Tk.5 have mostly ben replaced by coins while lower denomination coins [including all poysha coins] upto Tk. 1 have almost gone out of circulation due to inflation.. The most commonly used symbol for the taka is "৳" and "Tk", used on receipts while purchasing goods and services. It was formerly divided into 100 poysha, but poysha coins are no longer in circulation.

According to The American Heritage Dictionary of the English Language and Banglapedia, the word taka came from the Sanskrit word tankah. The word taka in Bangla is also commonly used generically to mean any money, currency, or notes. Thus, colloquially, a person speaking in Bangla may use "taka" to refer to money regardless of what currency it is denominated in. This is also common in the Indian states of West Bengal and Tripura, where the official name of the Indian rupees is "taka" as well. In other eastern Indian languages with the influence of Prakrit in Bihar it is "taka" in Maithili and Magadhi languages, in Assam it is টকা tôka and it is ଟଙ୍କା taṅkā in Odisha.

After the Partition of Bengal in 1947, East Bengal became the eastern wing of Pakistan and was renamed to East Pakistan in 1956. The Pakistani rupee also bore the word taka on official notes and coins. Bangla was one of the two national languages of the Pakistan union between 1956 and 1971 (the other being Urdu). The Bangladeshi taka came into existence since 1972, a year after the independence of the eastern wing of the union, as the independent nation of Bangladesh.

Prior to the Liberation war in 1971, banknotes of the State Bank of Pakistan circulated throughout Bangladesh, and continued to be used in Bangladesh even after independence for only about three months until the official introduction of the taka on 4 March 1972. During the war, it was an unofficial practice of some Bengali nationalists to protest Pakistani rule by stamping banknotes with "বাংলা দেশ" and "BANGLA DESH" as two words in either Bangla or English. These locally produced stamps are known to exist in several varieties, as are forgeries. On 8 June 1971, the Pakistani government declared that all banknotes bearing such stamps ceased to be legal tender. Furthermore, to prevent looted high-denomination notes from disrupting the Pakistani economy, the government also withdrew the legal tender status of all 100- and 500-rupee notes.

Some foreign publications mention that there were rubber stamp "BANGLA DESH" overprints on different denominations of Pakistani bank notes during the a.m. period. Pakistani postage stamps were rubber-stamped and used all over Bangladesh until 30 March 1973, but Bangladesh Bank or the Ministry of Finance never issued an order to overprint or rubber-stamp Pakistani currency.

The taka was introduced in Bangladesh in 1972, replacing the Pakistani rupee at par.

In 2011, Bangladesh Bank began issuing a new series of banknotes denominated in ৳2, ৳5, ৳100, ৳500, and ৳1000. All are dated 2011 and feature a portrait and watermark of the Father of the Nation, Bangabandhu Sheikh Mujibur Rahman, along the National Martyr's Monument in Savar at center front.

From 2011, the Bangladesh Bank introduced new notes denominated in ৳10, ৳20, and ৳50 on 7 March 2012. The notes bear the portrait of Bangabandhu Sheikh Mujibur Rahman and the National Martyr's Monument in Savar on the front. On the back of the notes, the ৳10 will picture the Baitul Mukarram mosque, the ৳20 pictures the Shat Gombuj mosque in Bagherat, and the ৳50 notes feature Shilpacharjo Zainul Abedin's famous painting "Ploughing."

On March 7 of 2019, Bangladesh Bank released new ৳100 notes, which had the same design as 2011 Version, but had better security, a stronger Blue and were made of a different material.

On December 15 of 2019, Bangladesh Bank issued new ৳50 banknotes, with the same design as the 2011 version, but had a different colour (orange, brown and fluorescent yellow-green), and a slightly different design in some parts.

On March 17 of 2020, Bangladesh Bank introduced new ৳200 notes. They bear a portrait of Bangabandhu Sheikh Mujibur Rahman on both sides and a landscape picture of a village, river and boats.

In 2011, Bangladesh Bank also introduced a ৳40 note to commemorate the "40th Victory Anniversary of Bangladesh". The commemorative note features a portrait of the Father of the Nation, Bangabandhu Sheikh Mujibur Rahman and the National Martyr's Monument in Savar on front, and six armed men on back. Curiously, this note has an electrotype 10 in the watermark, indicating it was likely printed on extra ৳10 banknote paper.

On 15 February 2012, Bangladesh Bank has introduced a ৳60 note to commemorate "60 years of National Movement". The commemorative note measures 130 by 60 millimetres (5.1 in × 2.4 in) and features the Shaeed Minar (Martyrs' monument) in Dhaka and five men on the back. Like the ৳40 commemorative note, this note has an electrotype 50 in the watermark. It was likely printed on extra ৳50 banknote paper.

On 26 January 2013, Bangladesh Bank issued a ৳25 note to commemorate the 25th anniversary (silver jubilee) of the Security Printing Corporation (Bangladesh) Ltd. On the front is the National Martyr's Monument in Savar, the designs of the previous series of the Bangladeshi taka notes and its postage stamps, three spotted deer and the magpie robin (doyel) bird. On the reverse is the headquarters of the Security Printing Corporation. Curiously, this note has an electrotype 10 in the watermark, indicating it was likely printed on extra ৳10 banknote paper.