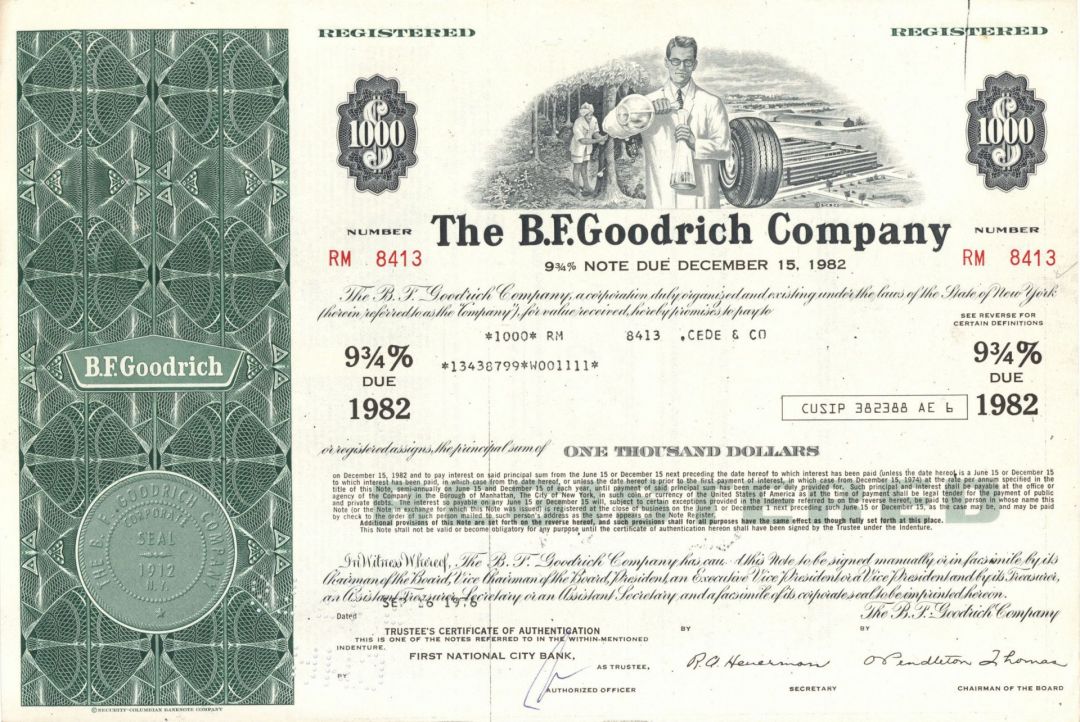 The Goodrich Corporation, formerly the B.F. Goodrich Company, was an American manufacturing company based in Charlotte, North Carolina. Founded in Akron, Ohio in 1870 as Goodrich, Tew & Co. by Benjamin Goodrich, the company name was changed to the "B.F. Goodrich Company" in 1880, to BFGoodrich in the 1980s, and to "Goodrich Corporation" in 2001. Originally a rubber manufacturing company known for automobile tires, the company diversified its manufacturing businesses throughout the twentieth century and sold off its tire business in 1986 to focus on its other businesses, such as aerospace and chemical manufacturing. The BFGoodrich brand name continues to be used by Michelin, who acquired the tire manufacturing business in 1988. Following the acquisition by United Technologies in 2012, Goodrich became a part of UTC Aerospace Systems.

In 1869 Benjamin Goodrich purchased the Hudson River Rubber Company, a small business in Hastings-on-Hudson, New York. The following year Goodrich accepted an offer of $13,600 from the citizens of Akron, Ohio, to relocate his business there.

The company grew to be one of the largest tire and rubber manufacturers in the world, helped in part by the 1986 merger with Uniroyal (formerly the United States Rubber Company). This product line was sold to Michelin in 1988, and the company merged with Rohr (1997), Coltec Industries, and TRW Aeronautical Systems (formerly Lucas Aerospace) in 2002. The sale of the specialty chemicals division and subsequent change to the current name completed the transformation. In 2006, company sales were $5.8 billion, of which 18%, 16% and 12% of total revenues were accounted for by the U.S. government, Airbus and Boeing, respectively.

Though BFGoodrich is a popular brand name of tires, the Goodrich Corporation exited the tire business in 1988. The tire business and use of the name was sold to French company Michelin. Before the sale to Michelin, Goodrich ran television and print ads showing an empty blue sky, to distinguish themselves from the similar-sounding Goodyear tire company. The tag line was, "See that blimp up in the sky? We're the other guys!" The company was also sometimes confused with Mr. Goodwrench as the two last names were similar, especially when B.F. Goodrich tires were featured on many General Motors cars and trucks.

In 1869 Benjamin Goodrich purchased the Hudson River Rubber Company, a small business in Hastings-on-Hudson, New York. The following year Goodrich accepted an offer of $13,600 from the citizens of Akron, Ohio, to relocate his business there.

The company helped found and start the Yokohama Rubber Company on Oct 13, 1917, in a joint venture between Yokohama Cable Manufacturing and B.F. Goodrich.

B.F. Goodrich sold radios from the 1930s to the 1950s, under the brand name "Mantola". These radios were actually made by a variety of manufacturers for B.F. Goodrich.

In 1936 the company entered the Mexican market in a joint venture, Goodrich-Euzkadi (now part of Continental AG).

The Troy, Ohio plant was purchased in 1946 from Waco. Since then, Goodrich has manufactured wheels and brakes for a variety of aircraft. Among these are commercial, military, regional, and business programs. This successful operation lies at the core of Goodrich's business. Competitors include the aerostructures divisions of companies such as Honeywell, Messier-Bugatti, Aircraft Braking Systems, (Howmet/Huck) and SNECMA. The Hood Rubber Company was sold before the Great Depression as a division of the B.F. Goodrich Company.

The new Uniroyal Goodrich Tire Company headquarters was established at the former B.F. Goodrich corporate headquarters, within its 27-building downtown complex in Akron, Ohio which contained Goodrich's original factory. In the autumn of 1987 B.F. Goodrich Company shut down several manufacturing operations at the site, and most of the complex remained vacant until February 1988, when B.F. Goodrich announced plans to sell the vacant part of the complex to the Covington Capital Corporation, a group of New York developers.

In 1987, its first full year of operation, the new Uniroyal Goodrich Tire Company generated almost $2 billion in sales revenue, with profits of $35 million.

The merger soon proved to be difficult. In June 1988 B.F. Goodrich sold its 50% stake for $225 million. The buyers were a group of investors led by Clayton & Dubilier, Inc. a private New York investment firm. At the same time, B.F. Goodrich also received a warrant to purchase indirectly up to 7% of the equity in Uniroyal Goodrich Tire Company.

Also in 1988, Michelin Group, a subsidiary of the French tire company Michelin et Cie (Euronext: ML) proposed to acquire the Uniroyal Goodrich Tire Company and took actions towards acquiring a stake. By May 1990, Michelin Group had completed its buyout of Uniroyal Goodrich Tire Company from Clayton & Dubilier of New York. The deal was valued at about US$1.5 billion. B.F. Goodrich surrendered its 7% warrant to Michelin Group, and received $32.5 million additional revenue from the sale.

B.F. Goodrich by then exited the tire business entirely, in line with its plan to build its chemicals and aerospace businesses through reinvestment and acquisitions. In 1997 it acquired Rohr, a maker of jet aircraft engine nacelles (the aerodynamic structures that surround aircraft engines), expanding its presence in integrated aircraft components industry.

In 1999 it acquired Charlotte, North Carolina-based Coltec Industries for $2.2 billion in stock and assumed debt, making the former tire maker the No. 1 supplier of landing gear and other aircraft parts. Headquarters were moved to Charlotte following this merger.

In 2001, the company divested its specialty chemicals business to focus on aerospace and industrial products and, to signify the completion of its transformation, it was renamed Goodrich Corporation and adopted a new logo.

In October 2002, Goodrich acquired TRW Aeronautical Systems, this division was mainly the former Lucas Aerospace activity, mostly based in the UK and France.

In September 2011, United Technologies Corporation (UTX) announced a deal to buy Goodrich for $18.4 billion, paying $127.50 per share and assuming $1.9 billion in debt.

On October 16, 2012, United Technologies Corporation secured an agreement to sell the Power Systems division of Goodrich (Twinsburg Ohio, Pitstone Green Buckinghamshire) to Safran for $400 million. The sale of this business unit was a condition that the Chinese competition regulators set in approving UTC's purchase of Goodrich. The Power Systems division had to be divested by the 16th December 2012. In the event the sale was completed on 27 March 2013.

On Feb 24, 2004, Goodrich restated its fourth-quarter and full-year earnings results for 2003 after Pratt & Whitney notified the company that it was drastically cutting its order for engine casing components.