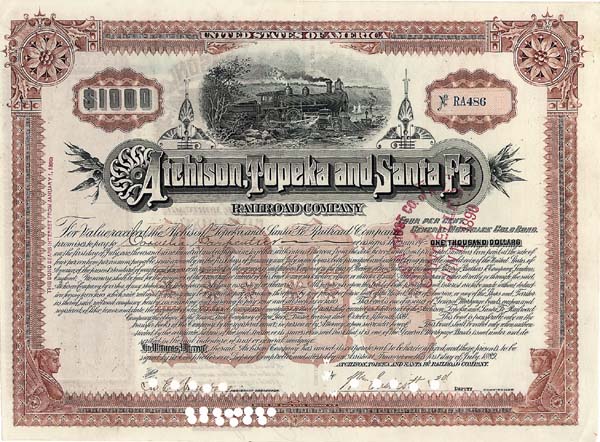 Years: 1889
Color: Br-Blk
Railroad Bond. Various Denominations. Great vignette of train passing by river. Very ornate style, title and borders. Becoming Rare. Very Popular! The Atchison, Topeka and Santa Fe Railway (AAR reporting marks ATSF), often abbreviated as Santa Fe, was one of the larger railroads in the United States. The company was first chartered in February 1859. Although the railway was named in part for the capital of New Mexico, its main line never reached there as the terrain made it too difficult to lay the necessary tracks (Santa Fe was ultimately served by a branch line from Lamy, New Mexico). The Santa Fe's first tracks reached the Kansas/Colorado state line in 1873, and connected to Pueblo, Colorado in 1876. In order to help fuel the railroad's profitability, the Santa Fe set up real estate offices and sold farm land from the land grants that the railroad was awarded by Congress; these new farms would create a demand for transportation (both freight and passenger service) that was, quite conveniently, offered by the Santa Fe. Ever the innovator, Santa Fe was one of the pioneers in intermodal freight service, an enterprise that (at one time or another) included a tugboat fleet and an airline, the short-lived Santa Fe Skyway. A bus line allowed the company to extend passenger transportation service to areas not accessible by rail, and ferry boats on the San Francisco Bay allowed travellers to complete their westward journeys all the way to the Pacific Ocean. The Atchison, Topeka and Santa Fe Railway officially ceased operations on December 31, 1996 when it merged with the Burlington Northern Railroad to form the Burlington Northern and Santa Fe Railway.
Condition: Excellent