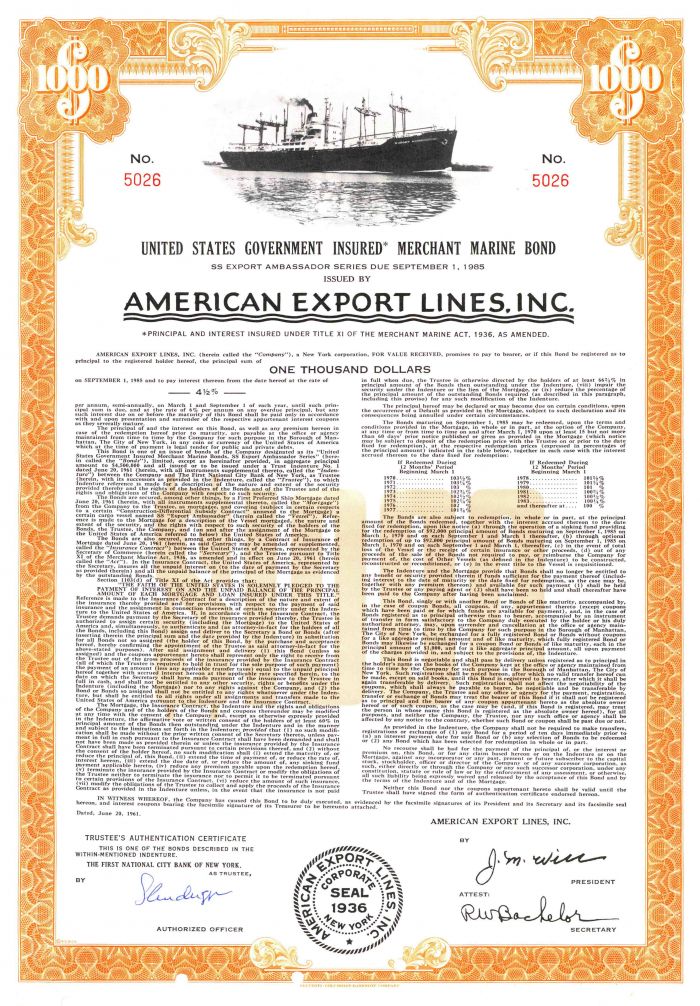 American Export-Isbrandtsen Lines, New York, was the leading US-flag shipping company between the U.S. east coast and the Mediterranean from 1919 to 1977, offering both cargo ship services and passenger ship services, until it declared bankruptcy and was acquired by Farrell Lines, New York.

Export Steamship Corporation was organized in 1919 and began operating cargo services to the Mediterranean from New York. The word "American" was added in the 1920s to emphasize its ties to the U.S.. In 1931, they placed in service four cargo-passenger liners, Excalibur, Excambion, Exeter and Exochorda, known as the "Four Aces". The timing of their new service was unfortunately at the beginning of the Depression. The company went through various reorganisations and became the American Export Lines in 1936. During World War II American Export Lines operated transports for the U.S. War Shipping Administration. In 1964, it merged with Isbrandtsen Co. to become the American Export-Isbrandtsen Lines.

In 1917, Hans Isbrandsen formed a shipping company name Hans Isbrandsen Inc. in Delaware and The Pan American Terminal & Dock Corporation in New York City. The shipping company underwent changes when Hans Isbrandtsen and his cousin A. P. Møller, the shipping magnate who formed the great Mærsk Line, began a joint venture in 1919 forming the Isbrandtsen-Moller Company (ISMOLCO) in New York. ISMOLCO grew rapidly when in 1928, a long-term agreement was reached with Ford Motor Corporation, shipping auto parts and general cargo for Japan, China and the Philippines via the Panama Canal. Isbrandtsen founded the Isbrandtsen Steamship Company in 1939 to operate ships in areas where ISMOLCO was not involved. In 1940, this joint venture dramatically transformed due to Permanent Special Instructions One issued by Møller, upon which A. P. Møller's son Mærsk Mc-Kinney Møller was made a partner. In 1941, the joint venture ended. Møller and his son went on to found the Interseas Shipping Co., Inc., the predecessor to the Moller Steamship Company, an agent for the Mærsk Line in the United States ¹ . While Interseas Shipping Co., Inc., operated mainly in the Atlantic, Isbrandtsen Steamship Company traded mainly in the Far East. Hans's son Jakob took over the company in 1953 upon Hans's passing and bought American Export Lines in 1960. The purchase was approved by the United States Maritime Administration in 1962. Jakob Isbrandtsen merged Isbrandtsen Co. with American Export Lines in 1964 to form American Export & Isbrandtsen Lines, which a year later changed its name to American Export-Isbrandtsen Lines.

American Export Lines (AEL), re-emerged after the dissolution of the American Export-Isbrandtsen Lines in 1973. AEL sold their Staten Island Marine Terminal to the City of New York in 1974. After heavy losses and unable to meet crippling debt payments, AEL went into bankruptcy in July 1977, with Farrell Lines buying its port operations in New York City and its remaining ships a year later, including two container ships on order or already under construction at Bath Iron Works, the Argonaut and Resolute, which were delivered directly to Farrell. Farrell Lines was acquired by Royal P&O Nedlloyd in July 2000, in turn, the Royal P&O Nedlloyd was acquired by A.P. Moller-Maersk Group in August 2005. The port operations formerly associated with the American Export-Isbrandtsen Lines became part of the Dubai Ports World controversy in February 2006.

Their first passenger ships were actually combination passenger-cargo ships, known as "Four Aces", Excalibur, Exeter, Excambion and Exochorda. These ships were ordered built by AEL during the time when the company's president was Henry Herbman, an old-time dockman in NY. They were built by the New York Shipbuilding Company, headed up by Clinton L. Bardo, and first launched in 1931. However, Mr.Herbman was not a good businessman and the ships had not been paid for. J.E. Slater, who was with the consulting firm Coverdale and Colpitts (NYC) was asked to look into their finances, and he quickly found that the business was not being run efficiently. Finally the Maritime Commission removed Herbman from his position and J.E. Slater was asked to run the company for a few years to stabilize it. The company's financial position improved significantly, assisted by a life insurance policy Mr. Herbman had bought himself, which was paid to the company and settled the debt problem. (This information was found in Mr. Slater's taped memoirs which were passed on to his children and grandchildren.) With the exception of the Exochorda, lost during World War II as a result of enemy fire. The latter ship was sold to Turkish Maritime Lines and renamed Tarsus.

Following the war, the tonnage was replaced with C-3 class troop transports with the same names. They were given luxury appointments for 125 passengers as well as sufficient cargo-carrying capacity.

The crowning achievement in American Export's passenger services were their largest and best-known liners, the SS Constitution and SS Independence. The vessels were designed in their entirety by Henry Dreyfuss and the names were chosen by a competition. O.J. (Skip) Weber, Mr. Slater's son-in-law entered both names and won the prize. The ship was 'sponsored' at its launching by Mrs. John E. (Pauline) Slater.

Item ordered may not be exact piece shown. All original and authentic.
Email this to a friend
Request Info
Previous Item (Port of New York Authority - $1,000 Bond)    (International Mercantile Marine - Bond - Co. that Made the Titanic) Next Item