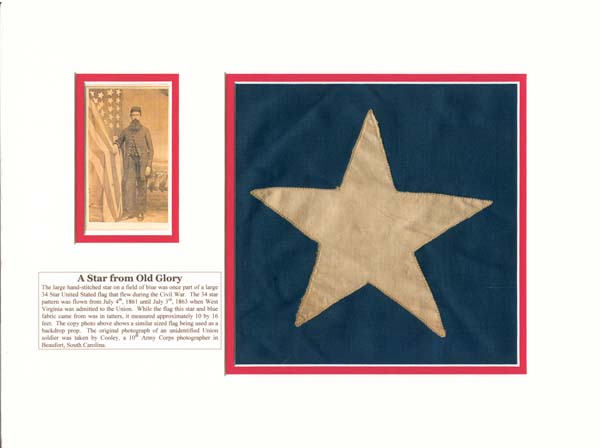 The large hand-stitched star on a field of blue was once part of a large 34 Star United States flag that flew during the Civil War. The 34 star pattern was flown from July 4th, 1861 until July 3rd, 1863 when West Virginia was admitted to tthe Union. While the flag this star and blue fabric came from was in tatters, it measured approximately 10 by 16 feet. The copy photo above shows a similar sized flag being used as a backdrop prop. The original photograph of an unidentified Union soldier was taken by Cooley, a 10th Army Corps photographer in Beaufort, South Carolina.

Due to damage in the red and white stripes section, the flags stars have become a very special relic. These large barracks flags were used on public buildings, camps, and troop barracks areas. This one came from the West Virginia area. This star is on its original blue fabric and is accompanied at back by a photo of the same damaged flag. Each of these 34 stars are individually numbered.

The flag of the United States of America, often referred to as the American flag or the U.S. flag, is the national flag of the United States. It consists of thirteen equal horizontal stripes of red (top and bottom) alternating with white, with a blue rectangle in the canton (referred to specifically as the "union") bearing fifty small, white, five-pointed stars arranged in nine offset horizontal rows, where rows of six stars (top and bottom) alternate with rows of five stars. The 50 stars on the flag represent the 50 states of the United States of America, and the 13 stripes represent the thirteen British colonies that declared independence from the Kingdom of Great Britain, and became the first states in the U.S. Nicknames for the flag include the Stars and Stripes, Old Glory, and the Star-Spangled Banner.

Prior to the Civil War, the American flag was rarely seen outside of military forts, government buildings and ships. During the American War of Independence and War of 1812 the army was not even officially sanctioned to carry the United States flag into battle. It was not until 1834 that the artillery was allowed to carry the American flag, the army would be granted to do the same in 1841. However, in 1847, in the middle of the war with Mexico, the flag was limited to camp use and not allowed to be brought into battle.

This all changed following the shots at Fort Sumter in 1861. The flag that had been flying over the fort was allowed to leave with the union troops as they surrendered. It was taken across northern cities and this spurned on a wave of "Flagmania". The stars and stripes, which had no real place in the public conscious, suddenly became a part of the national identity. The flag became a symbol for the union and the sale of flags exploded at this time. In a reversal, the 1847 army regulations would be dropped and the flag was allowed to be carried into battle. Some wanted to remove the stars of the southern states that seceded but Abraham Lincoln refused believing it would give legitimacy to the confederate states.

Item ordered may not be exact piece shown. All original and authentic.
Email this to a friend
Request Info
(Anti Jeff Davis - Civil War Cover) Next Item