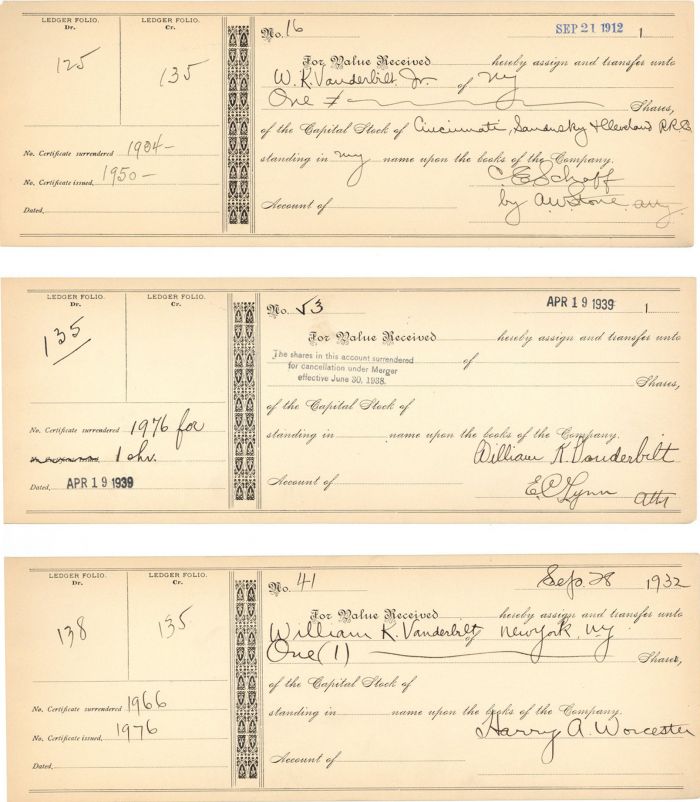 William Kissam "Willie" Vanderbilt I (December 12, 1849  July 22, 1920) was an American heir, businessman, philanthropist and horsebreeder. Born into the Vanderbilt family, he managed his family's railroad investments.

William Kissam Vanderbilt I was born on December 12, 1849, in New Dorp, Staten Island in New York. His parents were Maria Louisa Kissam (18211896) and William Henry Vanderbilt (18211885), the eldest son of Commodore Cornelius Vanderbilt, an heir to his fortune and a prominent member of the Vanderbilt family who was the richest American after he took over his father's fortune in 1877 until his own death in 1885.

Vanderbilt inherited $55 million (equal to about $1.6 billion today) from his father. He managed his family railroad investments. In 1879, after taking over P. T. Barnum's Great Roman Hippodrome which was on railroad property by Madison Square Park, he renamed the facility Madison Square Garden.

Vanderbilt was one of the founders of The Jockey Club. He was a shareholder and president of the Sheepshead Bay Race Track in Brooklyn, New York and the owner of a successful racing stable. In 1896, he built the American Horse Exchange at 50th Street (Manhattan) and Broadway. In 1911 he leased it (and eventually sold it to) the Shubert Organization who then transformed it into the Winter Garden Theatre.

After his divorce from Alva, he moved to France where he built a château and established the Haras du Quesnay horse racing stable and breeding farm near Deauville in France's famous horse region of Lower Normandy. Among the horses he owned was the U.S. Racing Hall of Fame filly Maskette, purchased from Castleton Farm in Lexington, Kentucky for broodmare services at his French breeding farm. Vanderbilt's horses won a number of important races in France including:

On April 20, 1875, Vanderbilt married his first wife, Alva Erskine Smith (18531933), who was born in 1853 in Mobile, Alabama, to Murray Forbes Smith, a commission merchant, and Phoebe Ann Desha, daughter of US Representative Robert Desha. Together, they had three children:

Alva later coerced Consuelo into marrying Charles Spencer-Churchill, 9th Duke of Marlborough on November 6, 1895. Alva divorced Vanderbilt in March 1895, at a time when divorce was rare among the elite, and received a large financial settlement reported to be in excess of $10 million (equal to about $310 million today). The grounds for divorce were allegations of Vanderbilt's adultery. Alva remarried to one of their old family friends, Oliver Hazard Perry Belmont, on January 11, 1896.

In 1903, Vanderbilt married Anne Harriman (18611940), daughter of banker Oliver Harriman. She was a widow to sportsman Samuel Stevens Sands and to Lewis Morris Rutherfurd, Jr., son of the astronomer Lewis Morris Rutherfurd. Her second husband had died in Switzerland in 1901. She had two sons by her first marriage and two daughters by her second marriage. She had no children by Vanderbilt.

In 1907, Vanderbilt and his second wife built Château Vanderbilt, a Louis XIII style manor house along with three thoroughbred race tracks in Carrières-sous-Poissy, an hour outside Paris and on the route to Deauville, famous for its horse racing.

Vanderbilt was a co-owner of the yacht Defender, which won the 1895 America's Cup and briefly owned the large steam yacht Consuelo. Vanderbilt was a founder and president of the New Theatre.

Vanderbilt made significant charitable contributions to Vanderbilt University, a private university in Nashville, Tennessee named for his grandfather.

Vanderbilt died in Paris, France, on July 22, 1920. His remains were brought home and interred in the Vanderbilt family vault in the Moravian Cemetery in New Dorp, Staten Island, New York.

Vanderbilt's portrait, painted by F. W. Wright from an original painting by Richard Hall between 1911 and 1921, was donated to Vanderbilt University in 1921; it is hung in Kirkland Hall.

Item ordered may not be exact piece shown. All original and authentic.
OUT OF STOCK
Request re-stock notice?
Email this to a friend
Request Info
Previous Item (3 Share Receipts Issued to or relating to a Vanderbilt - Transfer Receipts)    (3 Vanderbilts Sign - Autographs) Next Item