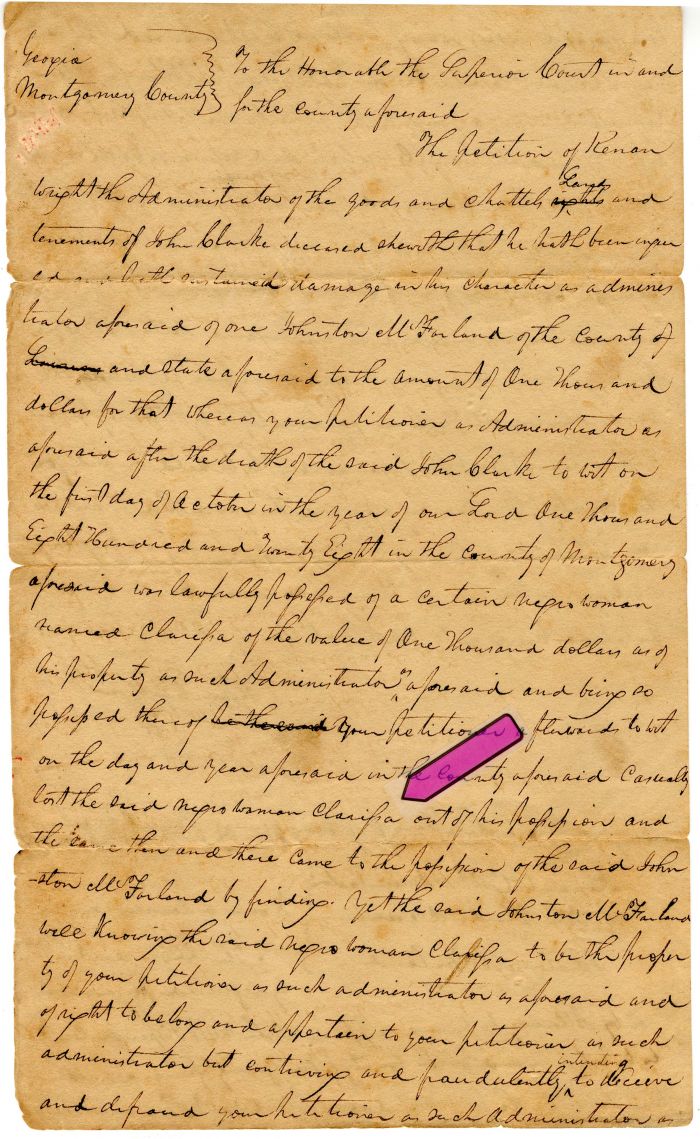 Document regarding the dispute of ownership of a negro woman named "Clarisa". These are usually in 15 pieces for some reason. Montgomery County, Georgia. 2 pages handwritten.

Montgomery County is a county located in the central portion of the U.S. state of Georgia. As of the 2010 census, the population was 9,123. The county seat is Mount Vernon.

Montgomery County is named in honor of Richard Montgomery, an American Revolutionary War general killed in 1775 while attempting to capture Quebec City, Canada. It was created on December 19, 1793, from a southern portion of Washington County, Georgia.

Arthur Lott's Plantation was designated the first county seat in 1797.

In 1801, Tattnall County, Georgia was formed from the southern part of Montgomery County. The dividing line between Tatnall and Montgomery ran from the mouth of Limestone Creek on the Oconee River, just below modern Mount Vernon, Georgia, to the mouth of Wolf Creek on the Canoochee River below Metter, Georgia.

On December 11, 1811, the county lines between Washington County, Montgomery County, and Laurens County were adjusted by the Georgia General Assembly. The northern section of Montgomery between the Oconee River and the Ohoopee River was transferred to Laurens. On December 10, 1812, the county line of Montgomery was significantly adjusted as part of the creation of Emanuel County. Its new boundaries became from the then Laurens and Telfair county line on the Oconee River to the north prong of the Little Ocmulgee River (near present Chauncey, Dodge County, Georgia) down the Little Ocmulgee River as it meanders to its confluence with the Ocmulgee River then downstream as it meanders to the Oconee River, then North 30 degrees to Milligan's Creek in Tatnall County, and then with it to the Montgomery County line. Pendleton Creek (in modern Treutlen and Toombs counties) was used as the border between Montgomery and Emanuel. Because of these transitions Montgomery regained part of the land it had lost in the creation of Tatnall County in 1801 (land along the lower Oconee River), but also lost land along the upper Oconee River to Laurens County.

The creation of Emanuel County put the old county seat within Emanuel's border. On December 12, the Georgia General Assembly appointed the justices of the inferior court of Montgomery county to a commission to designate a new county seat and called for county business to be held until then at the home of James Alston. In 1813, the General Assembly recognized Mount Vernon as the new county seat.

The land gained by Telfair County from Montgomery County on the northeast side of the Little Ocmulgee River was reversed by the Georgia General Assembly on December 18, 1833.

At the time of the 1850 United States Census, Montgomery had 1,541 whites, 613 slaves. By the 1860 census, there were 2,014 whites, 977 slaves, and 6 Free people of color. The pine barrens and soil quality outside of the river lands made the area unsuitable for slave-heavy cotton producing plantation culture. Montgomery's status as a majority white county led the region developing different attitudes about secession from other areas of Georgia.

In the interior of the county around Gum Swamp (Modern Chauncey, Georgia) near the Pulaski County, Telfair County, and Montgomery County lines a deserter gang fought against Confederate forces.

More recently, the county was noted for its practice of organizing segregated proms, a practice that had continued since integration of its schools in the 1970s. Following publicity about this practice, Montgomery County students took the initiative to integrate the prom in 2010.

Condition: Good
Item ordered may not be exact piece shown. All original and authentic.
OUT OF STOCK
Request re-stock notice?
Email this to a friend
Request Info
Previous Item (1867 - Slavery Document)    (1815 dated Slavery Document) Next Item