1792 Revolutionary War Document - Soldier's Claim for the Balance due Him 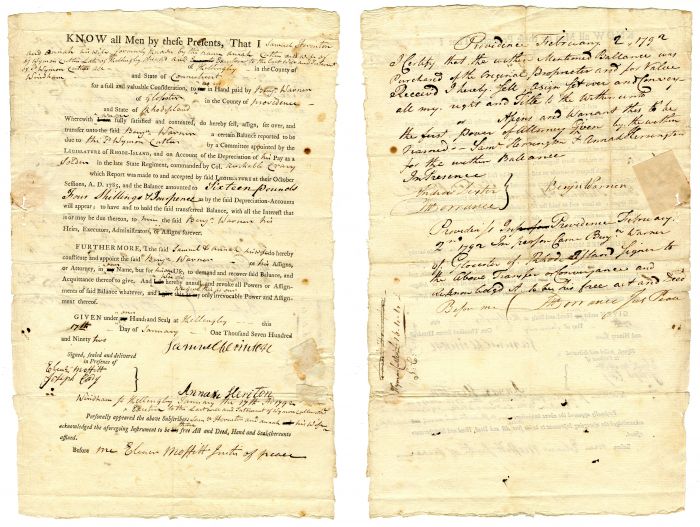 2 sided document about the Revolutionary War, being an individual claim of a soldier for the balance due him on account of the depreciation of continental currency.

The Continental Currency dollar was valued relative to the states' currencies at the following rates:

Continental currency depreciated badly during the war, giving rise to the famous phrase "not worth a continental". A primary problem was that monetary policy was not coordinated between Congress and the states, which continued to issue bills of credit. "Some think that the rebel bills depreciated because people lost confidence in them or because they were not backed by tangible assets," writes financial historian Robert E. Wright. "Not so. There were simply too many of them." Congress and the states lacked the will or the means to retire the bills from circulation through taxation or the sale of bonds.

Another problem was that the British successfully waged economic warfare by counterfeiting Continentals on a large scale. Benjamin Franklin later wrote:

The artists they employed performed so well that immense quantities of these counterfeits which issued from the British government in New York, were circulated among the inhabitants of all the states, before the fraud was detected. This operated significantly in depreciating the whole mass.

By the end of 1778, Continentals retained from 1⁄5 to 1⁄7 of their face value. By 1780, the bills were worth 1⁄40 of their face value. Congress attempted to reform the currency by removing the old bills from circulation and issuing new ones, without success. By May 1781, Continentals had become so worthless that they ceased to circulate as money. Franklin noted that the depreciation of the currency had, in effect, acted as a tax to pay for the war.

For this reason, some Quakers, whose pacifism did not permit them to pay war taxes, also refused to use Continentals, and at least one Yearly Meeting formally forbade its members to use the notes. In the 1790s, after the ratification of the United States Constitution, Continentals could be exchanged for treasury bonds at 1% of face value.

After the collapse of Continental currency, Congress appointed Robert Morris to be Superintendent of Finance of the United States. Morris advocated the creation of the first financial institution chartered by the United States, the Bank of North America, in 1782. The bank was funded in part by bullion coins loaned to the United States by France. Morris helped finance the final stages of the war by issuing notes in his name, backed by his personal line of credit, which was further backed by a French loan of $450,000 in silver coins. The Bank of North America also issued notes convertible into gold or silver. Morris also presided over the creation of the first mint operated by the U.S. government, which struck the first coins of the United States, the Nova Constellatio patterns of 1783.

The painful experience of the runaway inflation and collapse of the Continental dollar prompted the delegates to the Constitutional Convention to include the gold and silver clause into the United States Constitution so that the individual states could not issue bills of credit or "make any Thing but gold and silver Coin a Tender in Payment of Debts". However, in Juilliard v. Greenman the Supreme Court of the United States settled an ongoing and very heated debate on whether this restriction of issuing bills of credit was also extended to the Federal government:

"By the constitution of the United States, the several states are prohibited from coining money, emitting bills of credit, or making anything but gold and silver coin a tender in payment of debts. But no intention can be inferred from this to deny to congress either of these powers."