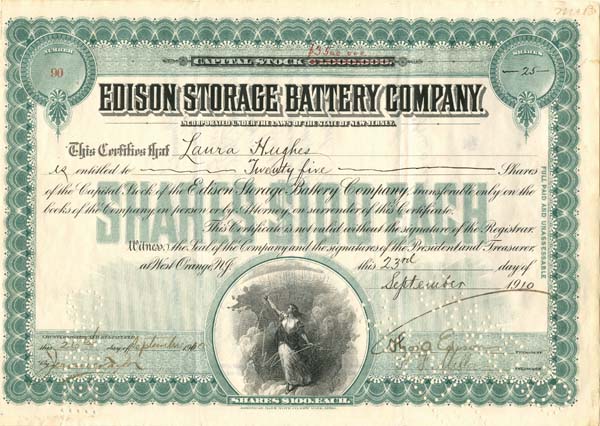 
Thomas A. Edison (1847-1931). Edison had a late start in his schooling due to childhood illness. His mind often wandered and his teacher Alexander Crawford was overheard calling him "addled". This ended Edison's three months of formal schooling. His mother had been a school teacher in Canada and happily took over the job of schooling her son. She encouraged and taught him to read and experiment. He recalled later, "My mother was the making of me. She was so true, so sure of me; and I felt I had something to live for, someone I must not disappoint." Partially deaf since adolescence, he became a telegraph operator after he saved Jimmie Mackenzie from being struck by a runaway train. Jimmie's father, station agent J.U. Mackenzie of Mount Clemens, MI, was so grateful that he took Edison under his wing and trained him as a telegraph operator. Edison's deafness aided him as it blocked out noises and prevented Edison from hearing the telegrapher sitting next to him. One of his mentors during those early years was a fellow telegrapher and inventor named Franklin Leonard Pope, who allowed the then impoverished youth to live and work in the basement of his Elizabeth, NJ home. Some of his earliest inventions related to electrical telegraphy, including a stock ticker. Edison applied for his first patent, the electric vote recorder, on October 28, 1868. Thomas Edison began his career as an inventor in Newark, NJ with the automatic repeater and other improved telegraphic devices, but the invention which first gained Edison fame was the phonograph in 1877. While non-reproducible sound recording was first achieved by Leon Scott de Martinville (France, 1857), and scientists at the time (notably Charles Cros) were contemplating the notion that sound waves might be recorded and reproduced, Edison was the first to publicly demonstrate a device to do so. This accomplishment was so unexpected by the public at large as to appear almost magical. Edison became known as "The Wizard of Menlo Park" after the site of an unsuccessful real estate development in Raritan Township, New Jersey called Menlo Park where he resided. His first phonograph recorded onto tinfoil cylinders that had low sound quality and destroyed the track during replay so that one could listen only once. In the 1880s, a redesigned model using wax-coated cardboard cylinders was produced at the Bell Laboratory by Chichester Bell and Charles Tainter; this was one factor which prompted Edison to resume work on his own "Perfected Phonograph". Both were marketed by the North American Phonograph Co, mainly for office dictation. The "gramophone", playing gramophone records, was invented by Emile Berliner in 1887, but in the early years, the audio fidelity was worse than the phonograph cylinders marketed by Edison Records. Edison's major innovation was the Menlo Park research lab, which was built in New Jersey. It was the first institution set up with the specific purpose of producing constant technological innovation and improvement. Edison invented most of the inventions produced there, though he primarily supervised the operation and work of his employees. William Joseph Hammer was an assistant to Edison and a consulting electrical engineer. In December 1879 he began his duties as laboratory assistant to Thomas Edison at Menlo Park. He assisted in experiments on the telephone, phonograph, electric railway, ore separator, electric lighting, and other developing inventions. However, he worked primarily on the incandescent electric lamp and was put in charge of tests and records on that device. In 1880 he was appointed Chief Engineer of the Edison Lamp Works. In this first year, the plant under general manager Francis Upton, turned out 50,000 lamps. According to Edison, Hammer was "a pioneer of Incandescent Electric Lighting"! SOLD
Item ordered may not be exact piece shown. All original and authentic.
OUT OF STOCK
Request re-stock notice?
Email this to a friend
Request Info
Previous Item (Edison Storage Battery Company - Signed twice by Thomas Edison - Stock Certificate)    (Edison Storage Battery Company signed by Charles Edison - Stock Certificate) Next Item