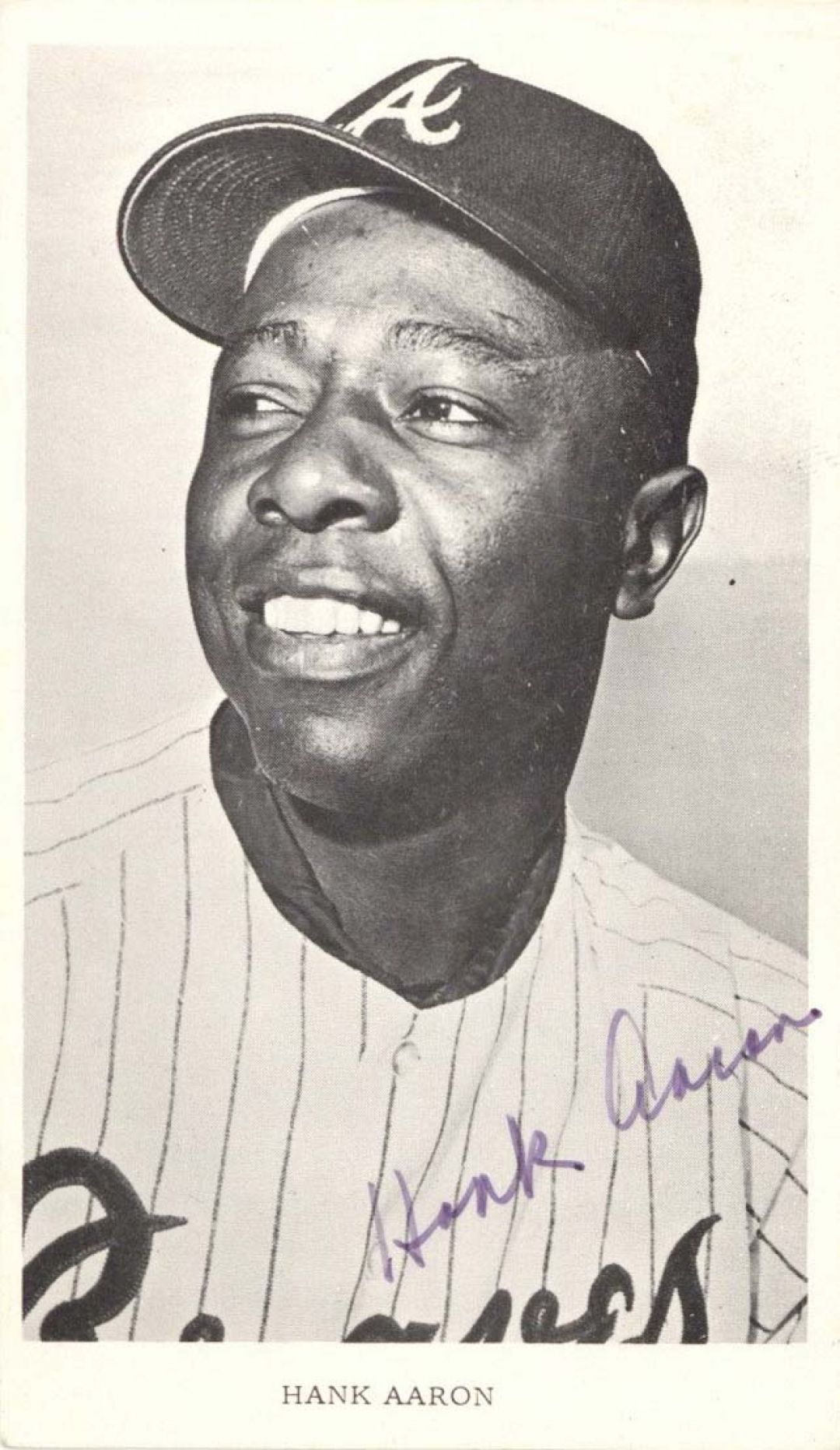 Henry Louis Aaron (February 5, 1934  January 22, 2021), nicknamed "Hammer" or "Hammerin' Hank", was an American professional baseball right fielderwho played 23 seasons in Major League Baseball (MLB), from 1954 through 1976. Widely regarded as one of the greatest baseball players in history, he spent 21 seasons with the Milwaukee/Atlanta Braves in the National League (NL) and two seasons with the Milwaukee Brewers in the American League (AL).

His 755 career home runs broke the long-standing MLB record set by Babe Ruth and stood as the most for 33 years; Aaron still holds many other MLB batting records. He hit 24 or more home runs every year from 1955 through 1973 and is one of only two players to hit 30 or more home runs in a season at least fifteen times. In 1999, The Sporting News ranked Aaron fifth on its list of the "100 Greatest Baseball Players". In 1982, he was inducted into the National Baseball Hall of Fame in his first year of eligibility.

Aaron was born and raised in and around Mobile, Alabama. Aaron had seven siblings, including Tommie Aaron, who played major-league baseball with him. He appeared briefly in the Negro American League and in minor league baseball before starting his major league career. By his final MLB season, Aaron was the last former Negro league baseball player on a major league roster. During his time in Major League Baseball, and especially during his run for the home run record, Aaron and his family endured extensive racist threats. His experiences fueled his activism during the civil rights movement.

Aaron played the vast majority of his MLB games in right field, though he appeared at several other infield and outfield positions. In his last two seasons, he was primarily a designated hitter. Aaron was an NL All-Star for 20 seasons and an AL All-Star for one season, and he holds the record for the most All-Star selections (25), while sharing the record for most All-Star Games played (24) with Willie Mays and Stan Musial. He was a three-time Gold Glove winner, and in 1957, he won the NL Most Valuable Player (MVP) Award when the Milwaukee Braves won the World Series. Aaron holds the MLB records for the most career runs batted in (RBIs) (2,297), extra base hits (1,477), and total bases (6,856). Aaron is also in the top five for career hits (3,771) and runs (2,174). He is one of only four players to have at least 17 seasons with 150 or more hits. Aaron is in second place in home runs (755) and at-bats (12,364), and in third place in games played (3,298). At the time of his retirement, Aaron held most of the game's key career power-hitting records.

After his retirement, Aaron held front office roles with the Atlanta Braves, including the senior vice president. In 1988, Aaron was inducted into the Wisconsin Athletic Hall of Fame.[8] In 1999, MLB introduced the Hank Aaron Award to recognize the top offensive players in each league. He was awarded the Presidential Medal of Freedom in 2002. He was named a 2010 Georgia Trustee by the Georgia Historical Society in recognition of accomplishments that reflect the ideals of Georgia's founders. Aaron resided near Atlanta until his death.