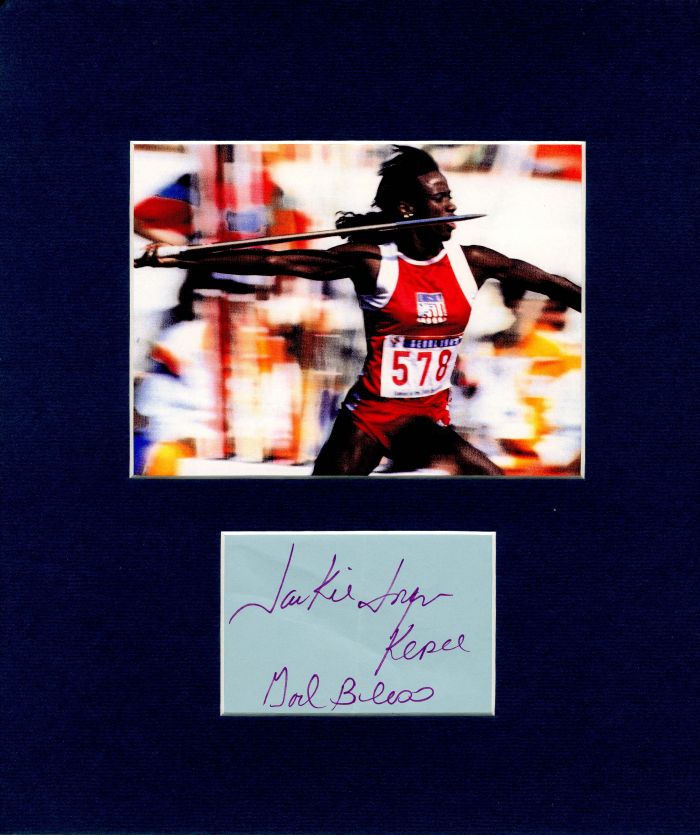 Portrait of and signed by Jackie Joyner-Kersee.

Jacqueline Joyner-Kersee (born March 3, 1962) is an American retired track and field athlete, ranked among the all-time greatest athletes in the heptathlon as well as long jump. She won three gold, one silver, and two bronze Olympic medals, in those two events at four different Olympic Games. Sports Illustrated for Women magazine voted Joyner-Kersee the Greatest Female Athlete of All-Time. She is on the Board of Directors for USA Track & Field (U.S.A.T.F).The national governing body of the sport.

Joyner-Kersee is an active philanthropist in children's education, racial equality and women's rights. She is a founder of the Jackie Joyner-Kersee Foundation, which encourages young people in East St. Louis to pursue athletics and academics. She partnered with Comcast to create the Internet Essentials program in 2011, which costs $9.95/month for low-income Americans and offers low-cost laptops and 40 hours/month of high-speed internet service. Since its inception, it has provided internet access to 4 million Americans.

Joyner-Kersee is one of the most famous athletes to have overcome severe asthma. She was born March 3, 1962, in East St. Louis, Illinois, and was named after Jackie Kennedy. As a high school athlete at East St. Louis Lincoln Senior High School, she qualified for the finals in the long jump at the 1980 Olympic Trials, finishing 8th behind another high schooler, Carol Lewis. She was inspired to compete in multi-disciplinary track & field events after seeing a 1975 made-for-TV movie about Babe Didrikson Zaharias. Didrikson, the track star, basketball player, and pro golfer, was chosen the "Greatest Female Athlete of the First Half of the 20th Century. Fifteen years later, Sports Illustrated for Women magazine voted Joyner-Kersee the greatest female athlete of all time, just ahead of Zaharias.

She scored 1,167 points during her collegiate career, which places her 19th all time for the Bruins games. The Bruins advanced to the West Regional semi-finals of the 1985 NCAA Women's Division I Basketball Tournament before losing to eventual runner-up Georgia.

She was honored on February 21, 1998 as one of the 15 greatest players in UCLA women's basketball. In April 2001, Joyner-Kersee was voted the "Top Woman Collegiate Athlete of the Past 25 Years." The vote was conducted among the 976 NCAA member schools.

Condition: Excellent
Item ordered may not be exact piece shown. All original and authentic.
Email this to a friend
Request Info
Previous Item (Portrait signed by Arthur Ashe)    (Program from the Desert Inn signed by the McGuire Sisters) Next Item