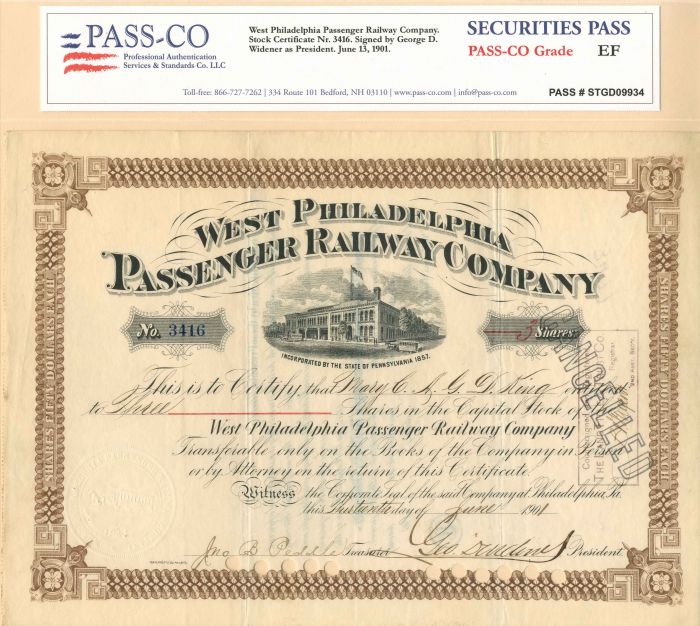 Stock signed at front, hole cancelled but hardly touching signature. PASS-CO Grade EF. Excellent Condition. George Dunton Widener (June 16, 1861 - April 15, 1912) was an American businessman who died in the sinking of the RMS Titanic. He is listed along with Harry Widener in the Roll of the Dead-First Cabin. Born in Philadelphia, he was the eldest son of Hannah Josephine Dunton (1836-1896) and the extremely wealthy entrepreneur Peter A. B. Widener (1834-1915). George Widener joined his father's business and eventually took over the running of the Philadelphia Traction Company and oversaw the development of cable and electric streetcar operations. He also served on the board of directors of several important area businesses. A patron of the arts, Widener was a Director of the Pennsylvania Academy of Fine Arts. In 1883, he married Eleanor Elkins, the daughter of his father's business partner, William Lukens Elkins. They had sons Harry Elkins Widener (b. 1885), George Dunton Widener, Jr. (b. 1889) and a daughter, Eleanor Widener (b. 1891). The family lived at Lynnewood Hall, his father's 110 room Georgian-style mansion in Elkins Park, Pennsylvania. In 1912 George Widener, his wife, and their son Harry traveled to Paris, France, booking their return passage on RMS Titanic. After the ship struck an iceberg, Widener placed his wife and her maid in a lifeboat. The pair were rescued by the steamship RMS Carpathia. George Dunton Widener and his son Harry both went down with the ship; their bodies, if recovered, were not identified. A memorial service for them was held at St. Paul's Episcopal Church in Elkins Park, Pennsylvania where stained glass windows were dedicated in their memory.
Condition: Excellent

Item ordered may not be exact piece shown. All original and authentic.
OUT OF STOCK
Request re-stock notice?
Email this to a friend
Request Info
($10,000 State of New York Bond Loan of Canal Improvement issued to and signed by George M. Cohan, Famous Actor, Composer, Playwright, and Producer) Next Item