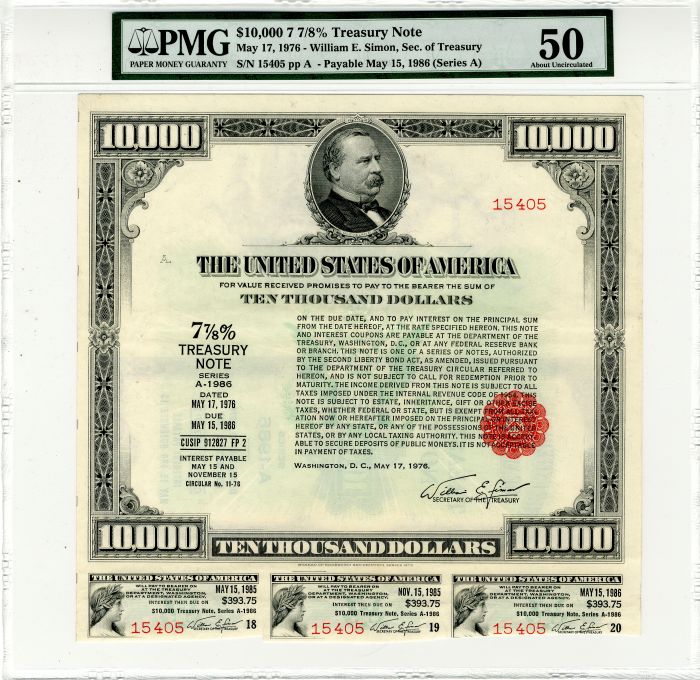 Pay to Bearer Treasury Note with a 7 and 7/8% Interest Rate. Only 2 known to exist. The other is in a prestigious collection. The issuance of actual paper bonds or notes such as this example were no longer produced as of January 1, 2012. This piece is deserving to any financial collection.

Treasury notes (T-notes) have maturities of 2, 3, 5, 7, or 10 years, have a coupon payment every six months, and are sold in increments of $100. T-note prices are quoted on the secondary market as a percentage of the par value in thirty-seconds of a dollar. Ordinary Treasury notes pay a fixed interest rate that is set at auction. Another type of note, known as the floating rate note, pays interest at a rate that adjusts quarterly based on bill rates. The 10-year Treasury note has become the security most frequently quoted when discussing the performance of the U.S. government bond market and is used to convey the market's take on longer-term macroeconomic expectations. United States Treasury securities are government debt instruments issued by the United States Department of the Treasury to finance government spending as an alternative to taxation. Treasury securities are often referred to simply as Treasurys. Since 2012, U.S. government debt has been managed by the Bureau of the Fiscal Service, succeeding the Bureau of the Public Debt.

There are four types of marketable treasury securities: Treasury bills, Treasury notes, Treasury bonds, and Treasury Inflation Protected Securities (TIPS). The government sells these securities in auctions conducted by the Federal Reserve Bank of New York, after which they can be traded in secondary markets. Non-marketable securities include savings bonds, issued to the public and transferable only as gifts; the State and Local Government Series (SLGS), purchaseable only with the proceeds of state and municipal bond sales; and the Government Account Series, purchased by units of the federal government. Treasury securities are backed by the full faith and credit of the United States, meaning that the government promises to raise money by any legally available means to repay them. Although the United States is a sovereign power and may default without recourse, its strong record of repayment has given Treasury securities a reputation as one of the world's lowest-risk investments.

The Department of the Treasury (USDT) is the national treasury of the federal government of the United States where it serves as an executive department. The department oversees the Bureau of Engraving and Printing, and the U.S. Mint; these two agencies are responsible for printing all paper currency and coins, while the treasury executes its circulation in the domestic fiscal system. The USDT collects all federal taxes through the Internal Revenue Service; manages U.S. government debt instruments; licenses and supervises banks and thrift institutions; and advises the legislative and executive branches on matters of fiscal policy. The Department is administered by the secretary of the treasury, who is a member of the Cabinet. The treasurer of the United States has limited statutory duties, but advises the Secretary on various matters such as coinage and currency production. Signatures of both officials appear on all Federal Reserve notes.

Established by an Act of Congress in 1789 to manage government revenue, the first secretary of the treasury was Alexander Hamilton, sworn into office on September 11. Hamilton was appointed by President George Washington on the recommendation of Robert Morris, Washington's first choice for the position, who had declined the appointment. Hamilton established the nation's early financial system and for several years was a major presence in Washington's administration. The office is thus customarily referred to as "Treasury", solely, without any preceding article, as a remnant of the country's transition from British to American English during the late 18th century. His portrait appears on the obverse of the ten-dollar bill, while the Treasury Department building is depicted on the reverse. The current secretary of the treasury is Janet Yellen, who was confirmed by the United States Senate on January 25, 2021. Jovita Carranza, appointed on April 28, 2017, was the incumbent treasurer, until January 15, 2020, when she left the office.

The history of the Department of the Treasury began in the turmoil of the American Revolution, when the Continental Congress at Philadelphia deliberated the crucial issue of financing a war of independence against Great Britain. The Congress had no power to levy and collect taxes, nor was there a tangible basis for securing funds from foreign investors or governments. The delegates resolved to issue paper money in the form of bills of credit, promising redemption in coin on faith in the revolutionary cause. On June 22, 1775only a few days after the Battle of Bunker HillCongress issued $2 million in bills; on July 25, 28 citizens of Philadelphia were employed by Congress to sign and number the currency.

On July 29, 1775, the Second Continental Congress assigned the responsibility for the administration of the revolutionary government's finances to joint Continental treasurers George Clymer and Michael Hillegas. Congress stipulated that each of the colonies contribute to the Continental government's funds. To ensure proper and efficient handling of the growing national debt in the face of weak economic and political ties between the colonies, the Congress, on February 17, 1776, designated a committee of five to superintend the treasury, settle accounts, and report periodically to the Congress. On April 1, a Treasury Office of Accounts, consisting of an auditor general and clerks, was established to facilitate the settlement of claims and to keep the public accounts for the government of the United Colonies. With the signing of the Declaration of Independence on July 4, 1776, the newborn republic as a sovereign nation was able to secure loans from abroad.

Despite the infusion of foreign and domestic loans, the united colonies were unable to establish a well-organized agency for financial administration. Michael Hillegas was first called Treasurer of the United States on May 14, 1777. The Treasury Office was reorganized three times between 1778 and 1781. The $241.5 million in paper Continental bills devalued rapidly. By May 1781, the dollar collapsed at a rate of from 500 to 1000 to 1 against hard currency. Protests against the worthless money swept the colonies, giving rise to the expression "not worth a Continental". The office has, since the late 18th century, been customarily referred to as the singular Treasury, without any preceding article, as a remnant of the country's transition from British to American English. For example, the department notes its guiding purpose as "Treasury's mission" instead of "the Treasury's mission."

Robert Morris was designated Superintendent of Finance in 1781 and restored stability to the nation's finances. Morris, a wealthy colonial merchant, was nicknamed "the financier" because of his reputation for procuring funds or goods on a moment's notice. His staff included a comptroller, a treasurer, a register, and auditors, who managed the country's finances through 1784, when Morris resigned because of ill health. The treasury board, consisting of three commissioners, continued to oversee the finances of the confederation of former colonies until September 1789.

The First Congress of the United States was called to convene in New York on March 4, 1789, marking the beginning of government under the Constitution. On September 2, 1789, Congress created a permanent institution for the management of government finances:

Be it enacted by the Senate and House of Representatives of the United States of America in Congress assembled, That there shall be a Department of Treasury, in which shall be the following officers, namely: a Secretary of the Treasury, to be deemed head of the department; a Comptroller, an Auditor, a Treasurer, a Register, and an Assistant to the Secretary of the Treasury, which assistant shall be appointed by the said Secretary.

Alexander Hamilton took the oath of office as the first secretary of the treasury on September 11, 1789. Hamilton had served as George Washington's aide-de-camp during the Revolution and was of great importance in the ratification of the Constitution. Because of his financial and managerial acumen, Hamilton was a logical choice for solving the problem of the new nation's heavy war debt. Hamilton's first official act was to submit a report to Congress in which he laid the foundation for the nation's financial health.

To the surprise of many legislators, he insisted upon federal assumption and dollar-for-dollar repayment of the country's $75 million debt in order to revitalize the public credit: "[T]he debt of the United States was the price of liberty. The faith of America has been repeatedly pledged for it, and with solemnities that give peculiar force to the obligation." Hamilton foresaw the development of industry and trade in the United States, suggesting that government revenues be based upon customs duties. His sound financial policies also inspired investment in the Bank of the United States, which acted as the government's fiscal agent.

The treasury believes their seal was created by Francis Hopkinson, the treasurer of loans. He submitted bills to Congress in 1780 that authorized the design of department seals, including the seal for the Board of Treasury. While it is it not certain that Hopkinson designed the seal, it is very similar to others he's done.

Congress transferred several agencies that had previously been under the aegis of the Treasury Department to other departments as a consequence of the September 11 attacks. Effective January 24, 2003, the Bureau of Alcohol, Tobacco and Firearms (ATF), which had been a bureau of the Department since 1972, was extensively reorganized under the provisions of the Homeland Security Act of 2002. The law enforcement functions of ATF, including the regulation of legitimate traffic in firearms and explosives, were transferred to the Department of Justice as the Bureau of Alcohol, Tobacco, Firearms, and Explosives (BATFE). The regulatory and tax collection functions of ATF related to legitimate traffic in alcohol and tobacco remained with the treasury at its new Alcohol and Tobacco Tax and Trade Bureau (TTB).

In 2020, the Treasury suffered a data breach following a cyberattack likely conducted by a nation state adversary, possibly Russia. This was in fact the first detected case of the much wider 2020 United States federal government data breach, which involved at least eight federal departments.

The basic functions of the Department of the Treasury mainly include: