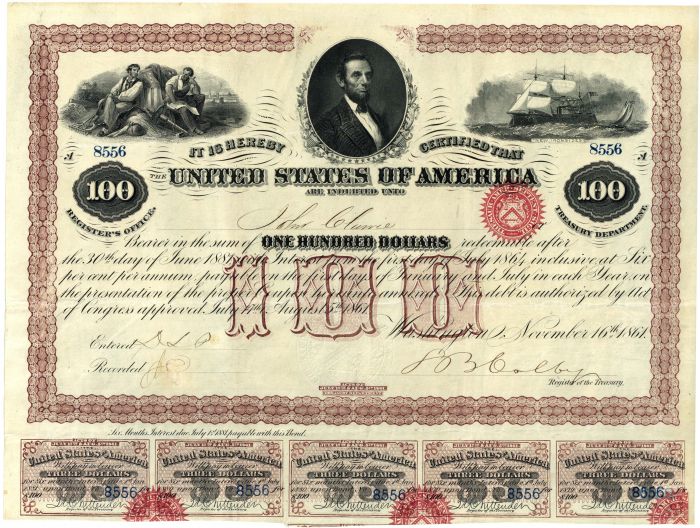 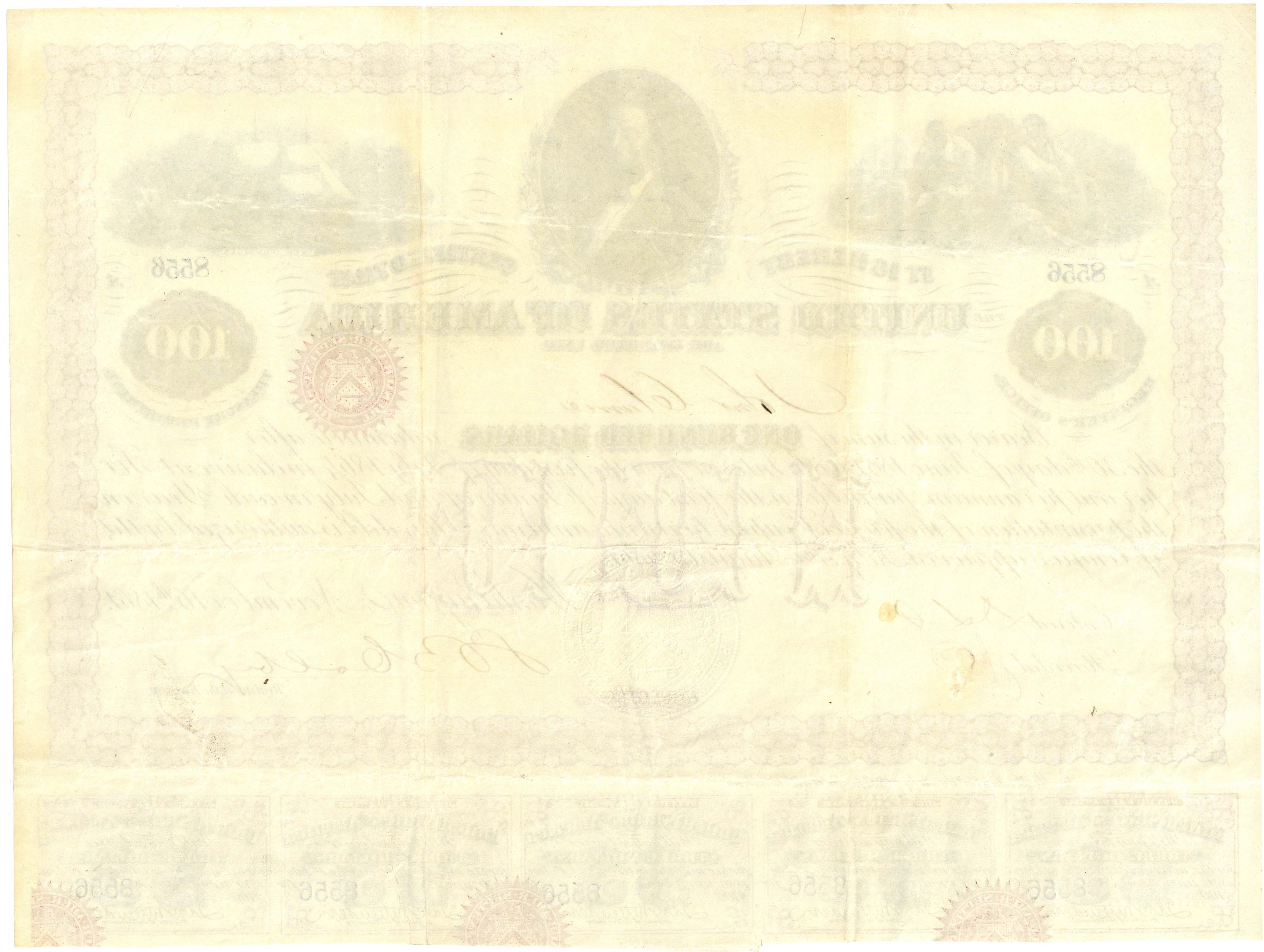 Signed by Stoddard Benham Colby (February 3, 1816  September 21, 1867) was an American lawyer and political figure. He is notable for his service as Register of the United States Treasury during the American Civil War.

Colby was born in Derby, Vermont on February 3, 1816. He was educated in Derby, and prepared for college by studying in the office of attorney Timothy P. Redfield. He graduated from Dartmouth College in 1836, and was elected to Phi Beta Kappa. He studied law with William Upham, was admitted to the bar, and practiced law in Derby. In 1840 he was elected to a single term in the Vermont House of Representatives, and served from 1841 to 1843. In 1846 he began to practice in Montpelier as the partner of Lucius B. Peck.

He was an unsuccessful Democratic candidate for the United States House of Representatives in 1856.

Colby was appointed Register of the Treasury and assumed office on August 12, 1864.

He was married to Harriet Elizabeth Proctor, sister of Sen. Redfield Proctor. She was one of the victims of the Henry Clay (steamboat) disaster. They had 4 children.

Colby died in Haverhill, New Hampshire following a five-week illness. He was buried at Proctor Cemetery in Proctorsville, Vermont.

The Revenue Act of 1861, formally cited as Act of August 5, 1861, Chap. XLV, 12 Stat. 292, included the first U.S. Federal income tax statute (see Sec.49). The Act, motivated by the need to fund the Civil War, imposed an income tax to be "levied, collected, and paid, upon the annual income of every person residing in the United States, whether such income is derived from any kind of property, or from any profession, trade, employment, or vocation carried on in the United States or elsewhere, or from any other source whatever [ . . . .]" The tax imposed was a flat tax, with a rate of 3% on incomes above $800. The Revenue Act of 1861 was signed into law by Abraham Lincoln.

Prior to the Civil War, the United States faced a financial depression subsequent to the Panic of 1857, an event facilitated by over-expansion of the domestic economy and a European financial meltdown. In the three years preceding the Civil War, the Federal Government incurred a budget deficit exceeding $40 million. Coupled with the threat of secession, the Federal deficit placed the US government under considerable financial strain. In 1860, the US Treasury paid between 8 and 12 percent interest on government bonds in order to raise additional funds and meet public expenditures. In December 1861, the US Treasury attempted to sell five millions of interest-bearing notes at 12 percent but found itself able to dispose of only four millions. The Treasury's struggles illustrate the precarious nature of the US government's financial state. As the nation edged closer to war, the need to mobilize a volunteer force placed an additional financial burden upon the Federal government. While treasury notes with enticing interest rates allowed the US government to raise revenue quickly, they also established a need for additional revenue streams with which to pay off interest.

In March 1861, President Lincoln began to explore the federal government's ability to wage war against the South from a logistical standpoint. He sent letters to cabinet members including Edward Bates, Salmon Chase, and Gideon Welles inquiring whether the president had constitutional authority to collect duties ranging from an import tariff to a property tax. Documents housed at the Library of Congress indicate that Lincoln was concerned with the Federal government's ability to collect tariffs from ports along the Southeastern seaboard, noting the imminent threat of secession.

On July 4, 1861, President Lincoln opened a special session of Congress with the explicit purpose of addressing the Civil War from a legislative standpoint. One of the primary concerns facing Congress was the question of funding: given a surfeit of volunteers, the Union Army military incurred extraordinary expenditures as they trained and armed a martial force. President Lincoln noted that, "One of the greatest perplexities of the government, is to avoid receiving troops faster than it can provide for them. In a word, the people will save their government, if the government itself, will do its part" To raise revenue by approximately $50 million, legislators adopted a three-pronged approach consisting of an increase in certain import tariffs, a newly instituted property tax, and the first personal income tax.

Under the leadership of Senator William Pitt Fessenden of Maine, chair of the Senate Finance Committee, Congress drafted the Revenue Act of 1861 in a relatively short time-frame. While the legislation effectively introduced import tariffs, property taxes, and a flat rate income tax of 3% on those making above $800, it lacked a comprehensive enforcement mechanism. In Congress, the bill provoked considerable debate: Thaddeus Stevens, chairman of the House Committee of Ways and Means, declared that, "This bill is a most unpleasant one. But we perceive no way in which we can avoid it and sustain the government. The rebels, who are now destroying or attempting to destroy this Government, have thrust upon the country many disagreeable things." His sentiment reflected the view that the income and property taxes levied by the bill were necessary evils. The bill was eventually passed by Congress and signed into law by President Lincoln. Despite its sweeping reform, the ineffective enforcement mechanism coupled with a 3% flat tax rate failed to yield the desired revenue.