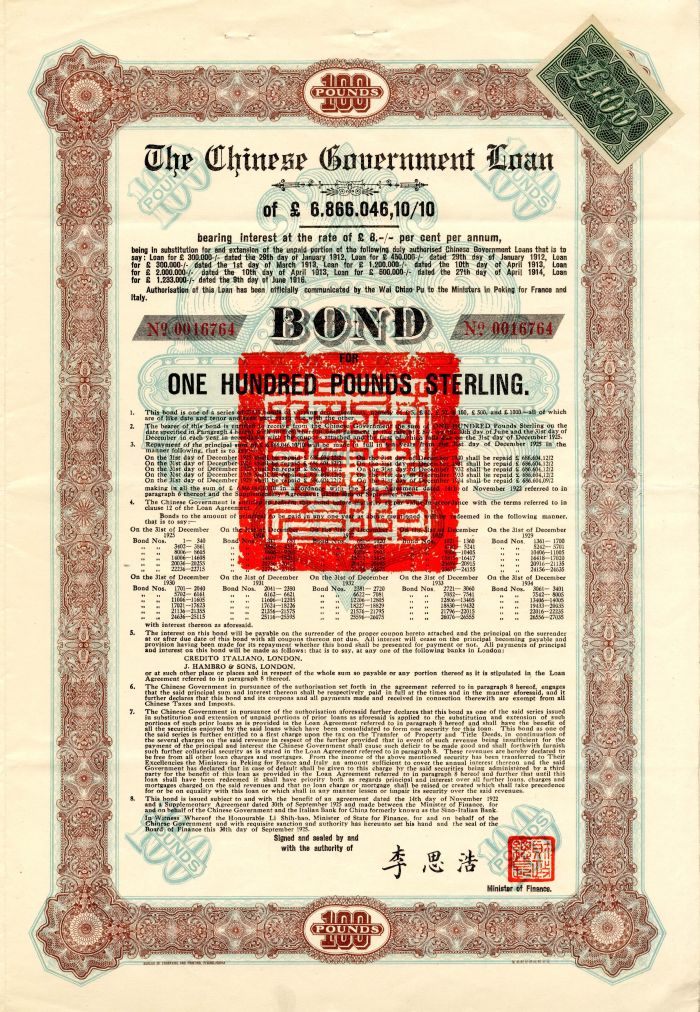 In 1911, the Imperial Chinese Government issued the Skoda Loan I for the purchase of naval and military arms from the Skoda-Works in Pilsen, Bohemia & the Italian Monfalcone Shipbuilding Yards.

Skoda Loans II of a total £6.9m were issued after agreements in 1922 & 1925 between the Chinese Ministry of Finance & the Italian Bank for China, formerly known as Sino-Italian Bank, acting on behalf of the Bondholders of the Skoda Loan II.

For every £100 Skoda Loan I due, a new £150 of this Skoda Loan II was issued. Coupons were payable at Credito Italiano & J. Hambro & Sons, both in London. The loans were printed by the Bureau of Engraving & Printing in Peking, China.

The koda Works was one of the largest European industrial conglomerates of the 20th century, founded by Czech engineer Emil koda in 1859 in Plzeň, then in the Kingdom of Bohemia, Austrian Empire. It is the predecessor of today's koda Auto, Doosan koda Power and koda Transportation companies.

The noble Waldstein family founded the company in 1859 in Plzeň, and Emil koda bought it in 1869. It soon established itself as Austria-Hungary's leading arms manufacturer producing heavy guns for the navy, mountain guns or mortars along with the koda M1909 machine gun as one of its noted products. Besides producing arms for the Austro-Hungarian Army, koda has ever since also manufactured locomotives, aircraft, ships, machine tools, steam turbines and equipment for power utilities.

In 1859, Count Wallenstein-Vartenberk set up a branch of his foundry and engineering works in Plzeň. The output of the plant, employing over 100 workers, included machinery and equipment for sugar mills, breweries, mines, steam engines, boilers, iron bridge structures, and railway facilities. In 1869, the plant was taken over by Emil koda, an industrious engineer and dynamic entrepreneur.

koda soon expanded the firm, and in the 1880s, he founded what was then a very modern steelworks capable of delivering castings weighing dozens of tons. Steel castings and later forgings for larger passenger liners and warships went on to rank alongside the sugar mills as the top export branches of koda's factory.

In 1899, the ever-expanding business was transformed into a joint-stock company, and before World War I, koda Works had become the largest arms manufacturer in Austria-Hungary. It was a navy and army contractor, mainly supplying heavy guns and ammunition.

Exports included castings, such as part of the piping for the Niagara Falls power plant and for the Suez Canal sluices as well as machinery for sugar mills in Turkey, breweries throughout Europe, and guns for the Far East and South America.

World War I brought a drop in the output of peacetime products. Huge sums were invested into expanding production capacities. By then, koda Works held majorities in a number of companies in the Czech lands and abroad that were not involved in arms manufacture. In 1917, the company had 35,000 employees in Plzeň alone.

Following the emergence of the Czechoslovak Republic in 1918, the complex economic conditions of postwar Europe caused the company to be transformed from what was exclusively an arms manufacturer into a multi-sector concern. In addition to traditional branches, the production programme embraced a number of new concepts, such as steam (and later electric) locomotives, freight and passenger vehicles, aircraft, ships, machine tools, steam turbines, power-engineering equipment, etc.

In 1923, the company's world-famous registered trademark, the winged arrow in a circle, was entered in the Companies Register. The deteriorating political situation in Europe saw arms production rise again in the mid-1930s.

koda manufactured the triple-barreled gun turrets for the Tegetthoff-class battleships of the Austro-Hungarian navy. Prior to World War II, koda produced LT-35 tanks, which are better known under their German designation, Panzer 35(t). They were originally produced for the Czechoslovak Army and were used extensively by the Wehrmacht in the Polish campaign, the Fall of France and the German invasion of the Soviet Union. In July 1944, koda started production of the Jagdpanzer 38(t).

In 1924, koda Works acquired the Laurin-Klement car manufacturer, later known as koda Auto. The companies were separated after 1945, when all of the Czechoslovak economy was nationalised.

Other weapons produced by koda

In 1945, the year that nationalisation efforts began in Czechoslovakia, koda was nationalised, and many sections were split from the company. The car works in Mladá Boleslav became Automobilové závody, národní podnik, AZNP, today's koda Auto, and the aircraft plant in Prague and truck plant became part of a conglomerate of nine truck producers headquartered in Liberec as LIAZ (Liberecké automobilové závody), although the trucks were still marketed as kodas. Some factories in Slovakia were also split off, and other plants produced food-industry equipment.

The company was renamed Závody Vladimíra Iljiče Lenina (Vladimir Ilyich Lenin Works) in 1953, but since the new name caused losses of sales abroad, the name was changed back to koda in 1965.

The factory concentrated on markets in the Soviet Union and the Eastern Bloc. The company produced a wide range of heavy machinery such as nuclear reactors and locomotives. A lack of updates to its product designs and infrastructure considerably weakened the company's competitive position and its brand.

After 1962, koda became well known in the Soviet Union and other countries as a trolley bus manufacturer after it began to export koda 9 Tr, one of its most successful models. The successor, koda 14 Tr, manufactured between 1982 and 1997, is still widely used, for example, in post-Soviet states.

After the Communist Party lost power in late 1989, the company was privatized into the hands of management. Mismanagement and asset stripping led to a collapse. The company was restructured and some factories closed. Except for some smaller companies named koda and koda Auto, after the chaotic 1990s period, the Czech koda companies were again regrouped within the holding company koda Holding a.s. in 2000. In 2010, the holding company changed its name to koda Investment, a.s..

Following the change in the political climate in 1989, koda started along a path of privatisation and used the time to come up with an optimal production programme, make new business contacts and look for markets other than those that had so far been its priority markets, communist countries.

In 1991, a foreign partner for the passenger car works koda Auto a.s. was sought by the Czech government. Volkswagen was chosen, and the German firm initially took a 30% stake, rising to 100% ownership by 1999. koda Auto is now a completely-independent entity from other companies bearing the koda name.

In 1992, the company was privatised by the so-called Czech method. It began expanding its production activities, acquiring the Tatra and LIAZ vehicle works and constructing a plant to produce aluminum soft drink cans. The expansion put the company's financial stability in jeopardy. In 1999, it concluded an agreement with creditor banks, and the restructuring of the entire capital structure of the koda group was undertaken. The result was the legal and financial stability at the company. Currently, a sectoral restructuring of production companies in the group is under way. In April 2000, koda Holding a.s. took over the helm, controlling nineteen primary subsidiaries and most product lines.

In 2003, the Czech government sold its 49% stake to the Appian Group for 350 million CZK; (in 2020, equivalent to 14,78 million USD) later that year the Appian Group acquired the rest of its stake in a liquidation of the previous owner. The Appian Group is a holding company incorporated in the Netherlands and controlled through a screen of shell companies. The real owner or owners are unknown, despite investigations by the Czech police. In September 2010, a group of four current or former koda or Appian managers announced that it would acquire koda from Appian for an undisclosed price. The Czech media speculated that the acquisition was only a formality, as the managers probably owned the parent company Appian.

koda was then focused solely on the transport sector. Other divisions have been sold, a large part of them to the Russian company OMZ (the price was not published, estimated at around 1 billion CZK). Some smaller transport companies were acquired, such as part of the Hungarian company Ganz, VÚKV (owner of the Velim railway test circuit) and some transport-related assets of the former ČKD, now called koda Vagonka. In 2009, koda holding announced that the South Korean conglomerate Doosan would acquire its power section for 11,5 billion CZK (656 million USD). Finally, in March 2011, koda sold its koda Transportation subsidiary to Cyprus-based company koda Industry (Europe) Ltd, later renamed CEIL (Central Europe Industries) Ltd.

As of 2012, koda Investment still owns the koda brand and some real estate but does not perform any industrial activity. Between 2007 and 2012, the company paid dividends to Appian, a sum of 32 billion CZK (1.18 billion euro or 1.6 billion USD).

Cantiere Navale Triestino  abbreviated CNT, or in English Trieste Naval Shipyard  was a private shipbuilding company based at Monfalcone operating in the early 20th century. The yard still functions today, though under a different name.

Cantiere Navale Triestino was founded in 1908 by the Cosulich family. The company was largely Italian, though the site, at Monfalcone, was in what was then the Austro-Hungarian Empire. Up to the outbreak of the First World War CNT had built several ships, both merchant such as Belvedere and military such as the cruiser Saida for the Austro-Hungarian Navy (KuK). At the outbreak of war between Italy and Austria in 1915 the largely Italian workforce abandoned the shipyard, while the site itself was too close to the front line to continue to operate. It was occupied by the Italian Army on 8 June 1915 and was under fire from the Austrians from July to September 1915 during the Battle of the Isonzo. The company continued to operate, using facilities loaned by DDSG at Budapest and the Naval Arsenal at Pola. During the war CNT built submarines for the KuK, including several of the U-27 class of U-Boats.

After World War I, the Trieste region was ceded to Italy and the firm built naval and commercial vessels for its new host country. In 1923 the company branched out into aviation, leading to the formation of the CANT aircraft company. In 1929 CNT was merged with another Italian shipbuilding firm, Stabilimento Tecnico Triestino to form Cantieri Riuniti dell' Adriatico (CRDA). As CRDA Monfalcone the company specialized in submarines, building 47 of Italy's 100 pre-war submarine fleet.