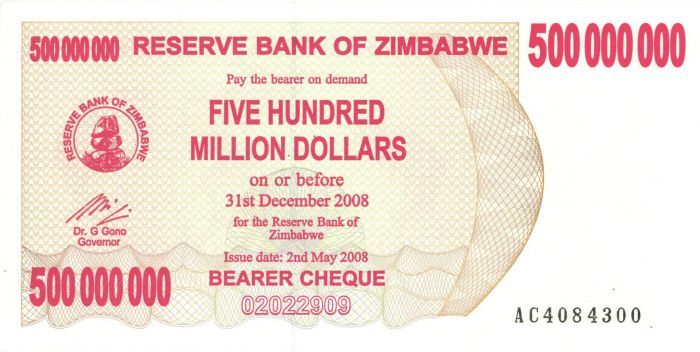 The Zimbabwean dollar (sign: $, or Z$ to distinguish it from other dollar-denominated currencies) was the name of four official currencies of Zimbabwe from 1980 to 12 April 2009. During this time, it was subject to periods of extreme inflation, followed by a period of hyperinflation.

The Zimbabwean dollar was introduced in 1980 to directly replace the Rhodesian dollar (which had been introduced in 1970) at par (1:1), at a similar value to the US dollar. In the 20th century the dollar functioned as a normal currency, but in the early 21st century hyperinflation in Zimbabwe reduced the Zimbabwean dollar to one of the lowest valued currency units in the world. It was redenominated three times (in 2006, 2008 and 2009), with denominations up to a $100 trillion banknote issued. The final redenomination produced the "fourth dollar" (ZWL), which was worth 1025 ZWD (first dollars). Read more at https://en.wikipedia.org/wiki/Zimbabwean_dollar