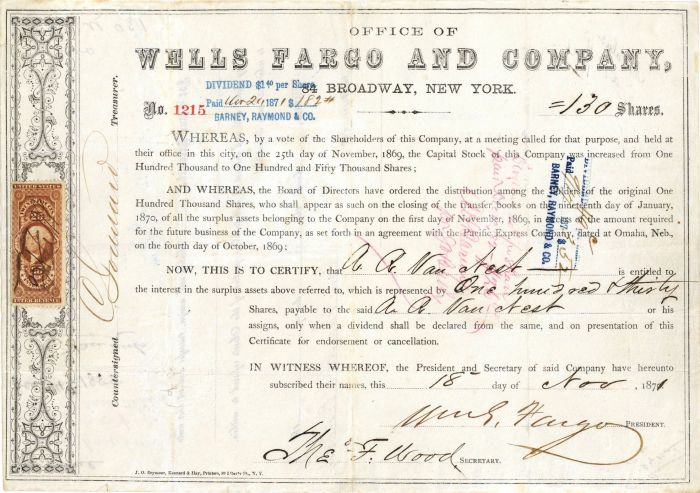 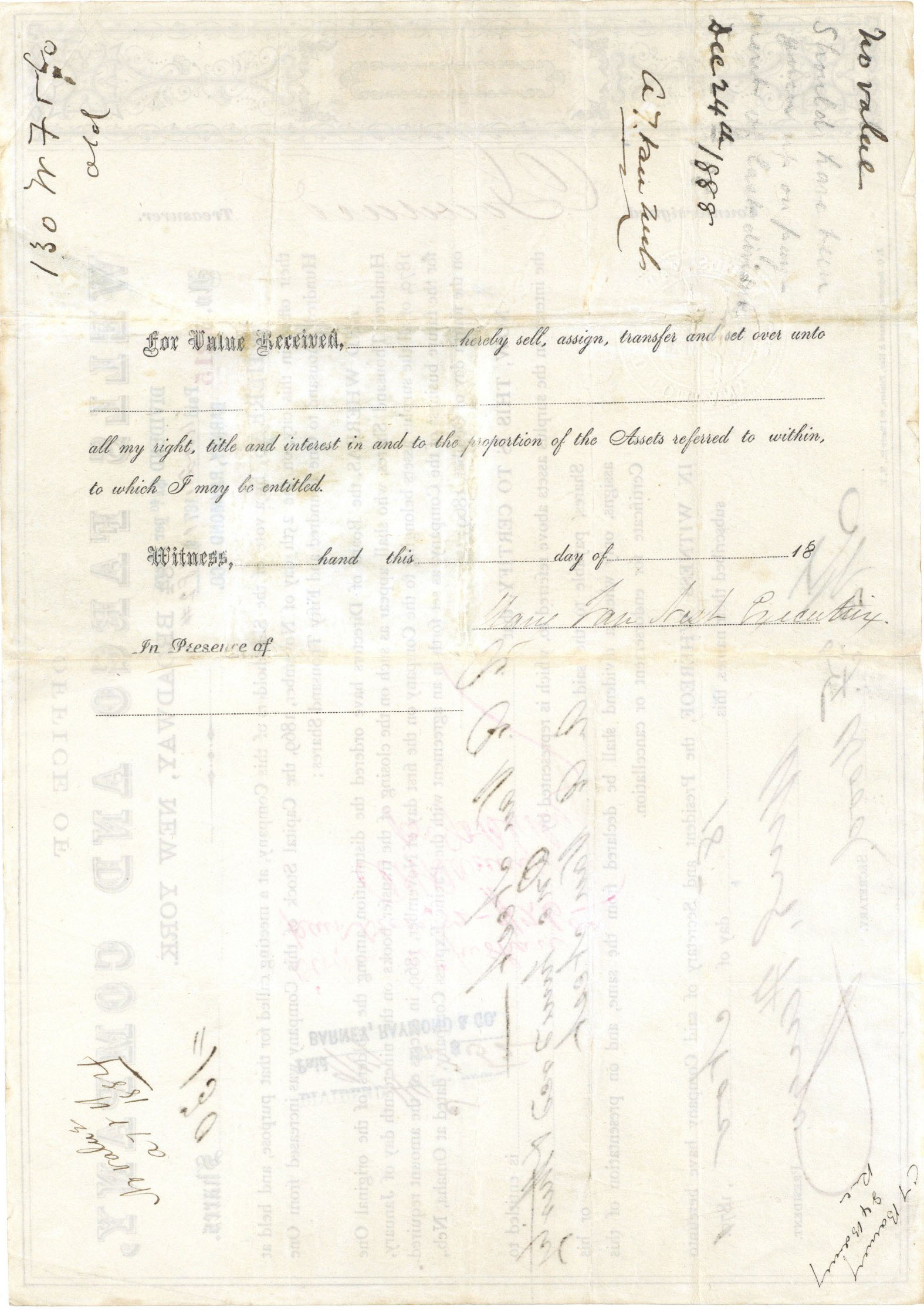 William George Fargo (May 20, 1818  August 3, 1881) was a pioneer American expressman who helped found the modern-day financial firms of American Express Company and Wells Fargo with his business partner, Henry Wells. He was also the 27th Mayor of Buffalo, serving from 1862 until 1866 during the U.S. Civil War.

William George Fargo was born in Pompey in Onondaga County, New York on May 20, 1818. He was the eldest of twelve children of William C. Fargo (17911878) (formerly of New London, Connecticut) and Stacy Chappel Strong (17991869). His younger brother was James Congdell Strong Fargo (18291915), president of the American Express Company for 30 years. William's education consisted only of the rudiments taught in a country school as he left school at the age of 13 to carry the mail in Pompey and help support his family.

His father, who was born in New London, Connecticut, fought in the War of 1812. The elder Fargo was stationed at Fort Niagara and fought in the battle of Queenston Heights under General Van Rensselaer that resulted in the death of British General Isaac Brock. Fargo was wounded in right thigh, just before the Americans took possession of the ground.

His grandfather was William Beebe Fargo (17571801), who served with distinction in the American Revolutionary War, the son of William Fargo (17261813). His great-grandfather was the son of Moses Fargo (16911798) and the grandson of Moses Fargo (16481742), who was born in Lyons, France. His father Jacent Fargeau, had emigrated with his wife and children to Wales, from where Moses and his elder brother Aaron went to Norfolk, Connecticut in 1670.

At the age of 13, Fargo left school and started carrying mail for his native village of Pompey, New York. In the winter of 1838, Fargo started working with Hough & Gilchrist, grocers, from Syracuse. He remained there for a year until he went to work with the grocers Roswell and Willett Hinman. After three years, Fargo obtained a clerkship in the forwarding house of Dunford & Co., Syracuse. In 1841, he became a freight agent, an express messenger between Albany and Buffalo, for the Auburn and Syracuse Railroad in Auburn. A year later in 1843, Fargo was a Resident Agent in Buffalo, New York. He left the Auburn and Syracuse Railroad and joined Livingston, Wells & Co., as messenger.

On April 1, 1845, along with Henry Wells and Daniel Dunning, Fargo organized the Western Express which ran from Buffalo to Cincinnati, St. Louis, Chicago and intermediate points, under the name of Wells & Co. At that time, there were no railroad facilities west of Buffalo, and Fargo, who had charge of the business, made use of steamboats and wagons.

In 1852, Henry Wells and Fargo created Wells Fargo & Co. when Butterfield (and other directors of American Express) objected to the extension of its operations to California. The original Wells Fargo & Co. was created to facilitate an express business between New York and San Francisco by way of the Isthmus of Panama and on the Pacific coast. The new company offered banking services, which included buying gold and selling paper bank drafts, and express services, which included rapid delivery of gold and anything else valuable. The company opened for business in the gold rush city of San Francisco, and soon the Company's agents opened offices in the other new cities and mining camps in the West.

In 1861, Wells Fargo & Company bought and reorganized the Overland Mail Co., which had been formed in 1857 to carry the United States mail, and of which Fargo had been one of the original promoters.

In 1861, he was elected mayor of Buffalo, serving from 1862 to 1866, as he was elected to a second term in 1863. During his term as mayor, the Buffalo riot of 1862 took place. Fargo was a lifelong Democrat and stood against secession. He supported the Union during the Civil War by paying a part of the salary of his employees that were drafted.

In January 1840, Fargo married Anna H. Williams (18201890), daughter of Nathan Williams, one of the proprietors of Pompey, with whom he had eight children:

the 'most elaborate and costly private mansion in the state,' outside of New York City. The house took two city blocks, from Pennsylvania Avenue, West Avenue, Jersey Street, and Fargo Avenue. There was a central tower five stories high. At his request it contained wood from all the states of the Union. It was the first home in the city to contain an elevator in it, and it was said to have gold doorknobs."

He died on August 3, 1881 after battling an illness for several months. After his funeral on August 7, 1881, he was buried at Forest Lawn Cemetery. At the time of his death, only two of his children were living, Georgia and Helen Fargo. William's brother, J.C. Fargo, succeeded him as President of American Express after his death.

Fargo's wife Anna died in 1890 and their two surviving children lived elsewhere so the Fargo Mansion stood vacant for 10 years. It was deemed too expensive to maintain and with no buyer, the mansion was demolished and the block cut into residential lots in 1901. The mansion and estate grounds were only 30 years old.

Fargo Avenue in Buffalo; the Fargo Quadrangle at the University at Buffalo; and Fargo, North Dakota are named after him.

The Fargo Estate Historic District was listed on the National Register of Historic Places in 2016.

Wells Fargo & Company is an American multinational financial services company with corporate headquarters in San Francisco, California; operational headquarters in Manhattan; and managerial offices throughout the United States and internationally. The company has operations in 35 countries with over 70 million customers globally. It is considered a systemically important financial institution by the Financial Stability Board.

The firm's primary subsidiary is Wells Fargo Bank, N.A.; a national bank chartered in Wilmington, Delaware; which designates its main office in Sioux Falls, South Dakota. It is the fourth largest bank in the United States by total assets and is one of the largest as ranked by bank deposits and market capitalization. Along with JPMorgan Chase, Bank of America, and Citigroup, Wells Fargo is one of the "Big Four Banks" of the United States. It has 8,050 branches and 13,000 ATMs. It is one of the most valuable bank brands.

Wells Fargo, in its present form, is a result of a merger between the original Wells Fargo & Company and Minneapolis-based Norwest Corporation in 1998. While Norwest was the nominal survivor, the merged company took the better-known Wells Fargo name and moved to Wells Fargo's hub in San Francisco. At the same time, its banking subsidiary merged with Wells Fargo's Sioux Falls-based banking subsidiary. Wells Fargo became a coast-to-coast bank with the 2008 acquisition of Charlotte-based Wachovia.

Wells Fargo is ranked 37th on the Fortune 500 list of the largest companies in the US. The company has been the subject of several investigations by regulators. On February 2, 2018, account fraud by the bank resulted in the Federal Reserve barring Wells Fargo from growing its nearly $2 trillion-asset base any further until the company fixed its internal problems to the satisfaction of the Federal Reserve. In September 2021, Wells Fargo incurred further fines from the United States Justice Department charging fraudulent behavior by the bank against foreign-exchange currency trading customers. Bloomberg Businessweek reported in March 2022 that Wells Fargo was the only major lender in 2020 to reject more home refinancing applications from Black applicants than it approved.

Henry Wells and William G. Fargo, who had helped found American Express along with John Butterfield, formed Wells Fargo & Company in 1852 to provide "express" and banking services to California, which was growing rapidly due to the California Gold Rush. Its earliest and most significant tasks included transporting gold from the Philadelphia Mint and "express" mail delivery that was faster and less expensive than U.S. Mail.

By the end of the California Gold Rush, Wells Fargo was a dominant express and banking organization in the west, making large shipments of gold and delivering mail and supplies. It was also the primary lender of Overland Mail Company, which ran a 2,757 mile route through the Southwest to San Francisco and was nicknamed the "Butterfield Line" after the company's president John Butterfield.

In 1872, Lloyd Tevis, a friend of the Central Pacific "Big Four" and holder of rights to operate an express service over the Transcontinental Railroad, became president of the company after acquiring a large stake, a position he held until 1892.

Condition: Excellent
Item ordered may not be exact piece shown. All original and authentic.
Email this to a friend
Request Info
Previous Item (City of Philadelphia - $100)    (Civil War Discharge Papers) Next Item