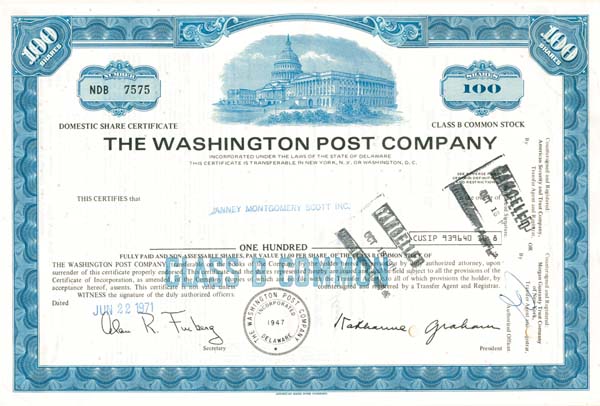 Graham Holdings Company (formerly The Washington Post Company) is a diversified American conglomerate holding company. Headquartered in Arlington County, Virginia, and incorporated in Delaware, it was formerly the owner of The Washington Post newspaper and Newsweek magazine.

The history of Graham Holdings Company dates back to 1877, when the Post was first published. The Washington Post Company was incorporated in the District of Columbia in 1889, and remained a District of Columbia corporation until it changed its place of incorporation to Delaware in 2003. It is a public company and its Class B common stock trades on the New York Stock Exchange under the ticker symbol GHC; it went public in 1971.

Since 1950, the company had been based in the Washington Post building in Washington, D.C., which was sold off separately in 2014. Its new headquarters are at 1300 North 17th Street in Arlington, Virginia, with the choice of state motivated (according to Don Graham) by the proximity to Congress and the fact that two of the holding's activity areas, education and health care, are subject to federal regulation.

On August 5, 2013 it was announced that the Washington Post Company would sell the flagship newspaper for $250 million to Jeff Bezos, founder and chief executive of Amazon.com. The Washington Post Company agreed to adopt a new corporate name once the sale was finalized. It adopted Graham Holdings Company as the new name effective November 29, 2013. Amazon.com was not involved in the sale. Nash Holdings LLC, a company owned by Bezos, closed the purchase of the newspaper and affiliated publications on October 1, 2013. Graham Holdings Company retained ownership of WaPo Labs, its technology innovation group, since rebranded as Trove.

In 2014, Tim O'Shaughnessy, founder of LivingSocial and a son-in-law of CEO Don Graham, joined GHC as president. O'Shaughnessy became CEO in November 2015.

In November 2014, Graham Holdings said it would spin off Cable ONE as a separate, publicly traded company in 2015. The spin-off was completed on July 1, 2015.

Through its Graham Media Group subsidiary (formerly Post-Newsweek Stations), Graham Holdings owns a group of seven television stations. Led by chief executive officer Emily L. Barr, the company is now based in Chicago, after being co-located for several years with its local NBC affiliate WDIV-TV in Detroit.

Stations are arranged in alphabetical order by state and city of license.

Graham Holdings Company also owns three firms active in various capacities on the World Wide Web. These include The Slate Group, which publishes Slate, Slate V, and ForeignPolicy.com. The Root, an online magazine focusing on African American culture, used to be held by The Slate Group until Graham Holdings sold it to Univision Communications in 2015. Graham Holdings Company also owns SocialCode, an advertising agency specializing in social media/ID-based marketing, and Panoply, a podcasting network.

In July 2013, Graham Holdings purchased Forney Corp. for an undisclosed sum. The company, which is based in Addison, Texas, manufactures equipment that monitors and controls the combustion of coal, natural gas, and other materials. This equipment is sold to electric utilities for use in power generation plants.

In May 2020, Graham Holdings announced that it had acquired Framebridge.

Following several years of significant enrollment decline, Graham sold Kaplan University to the Purdue University system for one dollar in March 2018, which was rebranded as Purdue University Global. In exchange, Purdue agreed to employ Kaplan, Inc. as the exclusive provider of nonacademic functions, and Kaplan, Inc. agreed to assume responsibility for liabilities resulting before the transaction. According to the contract terms, Kaplan receives 12.5 percent of the university's revenue, as long as funds are available after all operating expenses and guaranteed payments to Purdue have been covered. Purdue University Global reported an $18 million loss in 2018, and a $43 million loss in 2019. In February 2020, GHC reported that Purdue University Global owed Kaplan Higher Education $68.4 million for services and deferred fees and $18.6 million for an advance from the Kaplan University transaction. Despite spending a reported $132 million in marketing, more than $4,400 per enrolled student, and four times their competitor SNHU, enrollments at Global have remained virtually flat. In October 2020, Purdue University Global reported -$47 million in net assets, with a net operating loss of $103 million.