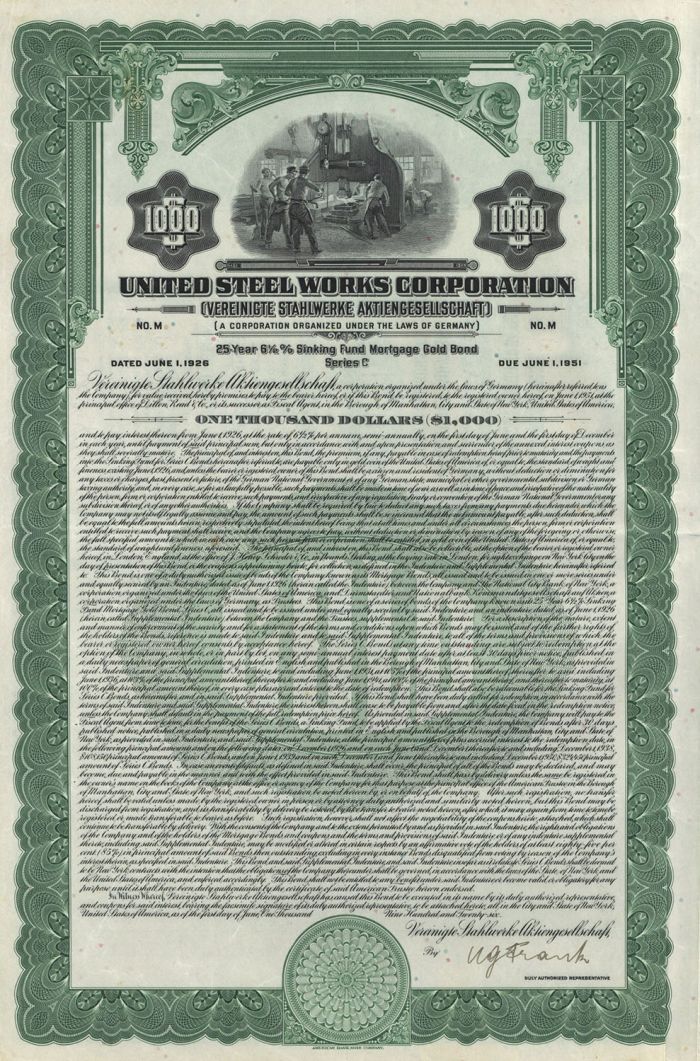 The Vereinigte Stahlwerke AG (VSt or Vestag, United Steelworks) was a German industrial conglomerate producing coal, iron, and steel in the interbellum and during World War II.

The company was headquartered in Düsseldorf. During the 1930s, VSt was one of the biggest German companies and, at times, also the largest steel producer in Europe. With up to about 250,000 workers, it produced about 40% of the steel and 20% of the coal produced in Germany. Chief executive officer (chief of the Vorstand) was initially Albert Vögler, until 1935. He was succeeded (1935−1943) as CEO by Ernst Poensgen, descendant of the Rhenish industrial family Poensgen and cofounder of the "Vereinigte Stahlwerke AG" in 1926. Fritz Thyssen was chairman of the board (Aufsichtsrat).

In 1932, as a result of the effects of the Great Depression, part of the company was nationalized to prevent bankruptcy. The Weimar government bought stock valued at 25 million Reichsmark (RM) for 99 million RM. This transaction like the similar Gelsenberg affair led to a public outcry. According to Heinrich Brüning the company then went on to support the Nazi party with 500,000 RM for the 1932 elections. The Nazi government re-privatized the stocks four years later so that the Vst achieved a net win of 33 million RM. The Vst became a major contributor in supplying materiel and munitions to the war effort. However, as the Vst was unable to fulfill the demands of the Nazi government, another steelworks, the Reichswerke Hermann Göring, was founded in Salzgitter.

During World War II, most of the production facilities were destroyed by bombing, and after the war, the company was dismantled. From the residuals several companies were founded in the Federal Republic of Germany after 1951, including Hörder Bergwerks- und Hütten-Verein, August Thyssen-Hütte AG, Rheinstahl, and Bochumer Verein.

Steel is an alloy made up of iron with typically a few tenths of a percent of carbon to improve its strength and fracture resistance compared to iron. Many other elements may be present or added. Stainless steels that are corrosion- and oxidation-resistant need typically an additional 11% chromium. Because of its high tensile strength and low cost, steel is used in buildings, infrastructure, tools, ships, trains, cars, machines, electrical appliances, and weapons. Iron is the base metal of steel. Depending on the temperature, it can take two crystalline forms (allotropic forms): body-centred cubic and face-centred cubic. The interaction of the allotropes of iron with the alloying elements, primarily carbon, gives steel and cast iron their range of unique properties.

Steel was known in antiquity and was produced in bloomeries and crucibles.

The earliest known production of steel is seen in pieces of ironware excavated from an archaeological site in Anatolia (Kaman-Kalehöyük) and are nearly 4,000 years old, dating from 1800 BC. Horace identifies steel weapons such as the falcata in the Iberian Peninsula, while Noric steel was used by the Roman military.

The reputation of Seric iron of South India (wootz steel) grew considerably in the rest of the world. Metal production sites in Sri Lanka employed wind furnaces driven by the monsoon winds, capable of producing high-carbon steel. Large-scale Wootz steel production in India using crucibles and carbon sources such as the plant Avāram occurred by the sixth century BC, the pioneering precursor to modern steel production and metallurgy.

The Chinese of the Warring States period (403221 BC) had quench-hardened steel, while Chinese of the Han dynasty (202 BC  AD 220) created steel by melting together wrought iron with cast iron, thus producing a carbon-intermediate steel by the 1st century AD.

There is evidence that carbon steel was made in Western Tanzania by the ancestors of the Haya people as early as 2,000 years ago by a complex process of "pre-heating" allowing temperatures inside a furnace to reach 1300 to 1400 °C.

Evidence of the earliest production of high carbon steel in India are found in Kodumanal in Tamil Nadu, the Golconda area in Andhra Pradesh and Karnataka, and in the Samanalawewa areas of Sri Lanka. This came to be known as Wootz steel, produced in South India by about the sixth century BC and exported globally. The steel technology existed prior to 326 BC in the region as they are mentioned in literature of Sangam Tamil, Arabic, and Latin as the finest steel in the world exported to the Romans, Egyptian, Chinese and Arab worlds at that time  what they called Seric Iron. A 200 BC Tamil trade guild in Tissamaharama, in the South East of Sri Lanka, brought with them some of the oldest iron and steel artifacts and production processes to the island from the classical period. The Chinese and locals in Anuradhapura, Sri Lanka had also adopted the production methods of creating Wootz steel from the Chera Dynasty Tamils of South India by the 5th century AD. In Sri Lanka, this early steel-making method employed a unique wind furnace, driven by the monsoon winds, capable of producing high-carbon steel. Since the technology was acquired from the Tamilians from South India, the origin of steel technology in India can be conservatively estimated at 400500 BC.

The manufacture of what came to be called Wootz, or Damascus steel, famous for its durability and ability to hold an edge, may have been taken by the Arabs from Persia, who took it from India. It was originally created from several different materials including various trace elements, apparently ultimately from the writings of Zosimos of Panopolis. In 327 BC, Alexander the Great was rewarded by the defeated King Porus, not with gold or silver but with 30 pounds of steel. Recent studies have suggested that carbon nanotubes were included in its structure, which might explain some of its legendary qualities, though, given the technology of that time, such qualities were produced by chance rather than by design. Natural wind was used where the soil containing iron was heated by the use of wood. The ancient Sinhalese managed to extract a ton of steel for every 2 tons of soil, a remarkable feat at the time. One such furnace was found in Samanalawewa and archaeologists were able to produce steel as the ancients did.

Crucible steel, formed by slowly heating and cooling pure iron and carbon (typically in the form of charcoal) in a crucible, was produced in Merv by the 9th to 10th century AD. In the 11th century, there is evidence of the production of steel in Song China using two techniques: a "berganesque" method that produced inferior, inhomogeneous steel, and a precursor to the modern Bessemer process that used partial decarbonization via repeated forging under a cold blast.

Since the 17th century, the first step in European steel production has been the smelting of iron ore into pig iron in a blast furnace. Originally employing charcoal, modern methods use coke, which has proven more economical.

In these processes pig iron was refined (fined) in a finery forge to produce bar iron, which was then used in steel-making.

The production of steel by the cementation process was described in a treatise published in Prague in 1574 and was in use in Nuremberg from 1601. A similar process for case hardening armor and files was described in a book published in Naples in 1589. The process was introduced to England in about 1614 and used to produce such steel by Sir Basil Brooke at Coalbrookdale during the 1610s.

The raw material for this process were bars of iron. During the 17th century, it was realized that the best steel came from oregrounds iron of a region north of Stockholm, Sweden. This was still the usual raw material source in the 19th century, almost as long as the process was used.

Crucible steel is steel that has been melted in a crucible rather than having been forged, with the result that it is more homogeneous. Most previous furnaces could not reach high enough temperatures to melt the steel. The early modern crucible steel industry resulted from the invention of Benjamin Huntsman in the 1740s. Blister steel (made as above) was melted in a crucible or in a furnace, and cast (usually) into ingots.

The modern era in steelmaking began with the introduction of Henry Bessemer's Bessemer process in 1855, the raw material for which was pig iron. His method let him produce steel in large quantities cheaply, thus mild steel came to be used for most purposes for which wrought iron was formerly used. The Gilchrist-Thomas process (or basic Bessemer process) was an improvement to the Bessemer process, made by lining the converter with a basic material to remove phosphorus.

Another 19th-century steelmaking process was the Siemens-Martin process, which complemented the Bessemer process. It consisted of co-melting bar iron (or steel scrap) with pig iron.

These methods of steel production were rendered obsolete by the Linz-Donawitz process of basic oxygen steelmaking (BOS), developed in 1952, and other oxygen steel making methods. Basic oxygen steelmaking is superior to previous steelmaking methods because the oxygen pumped into the furnace limited impurities, primarily nitrogen, that previously had entered from the air used, and because, with respect to the open-hearth process, the same quantity of steel from a BOS process is manufactured in one-twelfth the time. Today, electric arc furnaces (EAF) are a common method of reprocessing scrap metal to create new steel. They can also be used for converting pig iron to steel, but they use a lot of electrical energy (about 440 kWh per metric ton), and are thus generally only economical when there is a plentiful supply of cheap electricity.

Item ordered may not be exact piece shown. All original and authentic.
OUT OF STOCK
Request re-stock notice?
Email this to a friend
Request Info
Previous Item (State of Bremen (Uncanceled))    (Konigreich Westphalen (Kingdom of Westphalia) - "Napoleon") Next Item