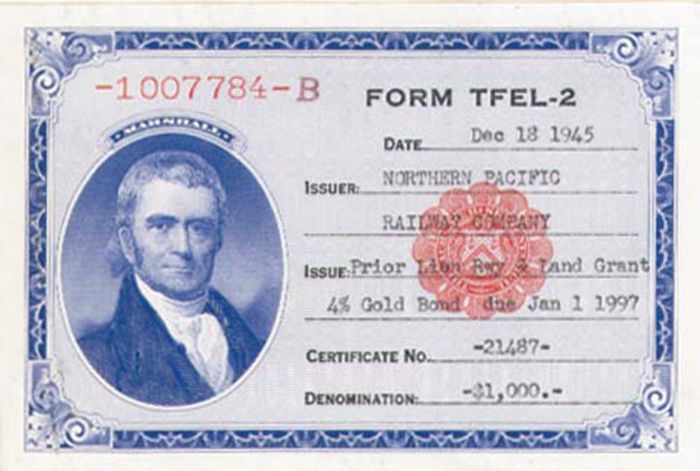 This small certificate bears a U.S. Treasury Department Seal and is sporadically found attached to bonds (and occasionally stocks). The certificates encountered so far seem to date from 1941 to 1943.

A correspondent finally helped solve this long-running mystery by directing me to a huge page of the Presidential Advisory Commission on Holocaust Assets in the United States. One of those pages explains, in detail, the issues involved in freezing assets of Germany and its conquered nations during World War II.

Similar to the freezing of terrorist assets in today's world, the U.S. attempted to prevent hostile interests from trading securities and thereby funding war efforts. Of course, that action also inadvertently blocked the securities of victims from those same countries.

It turns out that TFEL-2 was a form that allowed friendly, non-hostile foreign nationals to trade American securities during the war. Quoting Chapter III, Assets in the United States, this curious form, TFEL-2, was attached to securities "if the owners could prove that they were free from any blocked interest." The Treasury Department addressed many of these problems through certification, an expedient somewhat similar to the European practice of affixing tax stamps to legitimately acquired securities. (Thanks to Neal Greenberg for helping solve this problem). History completed by Terry Cox of Coxrail.com. Thank you very much Terry!