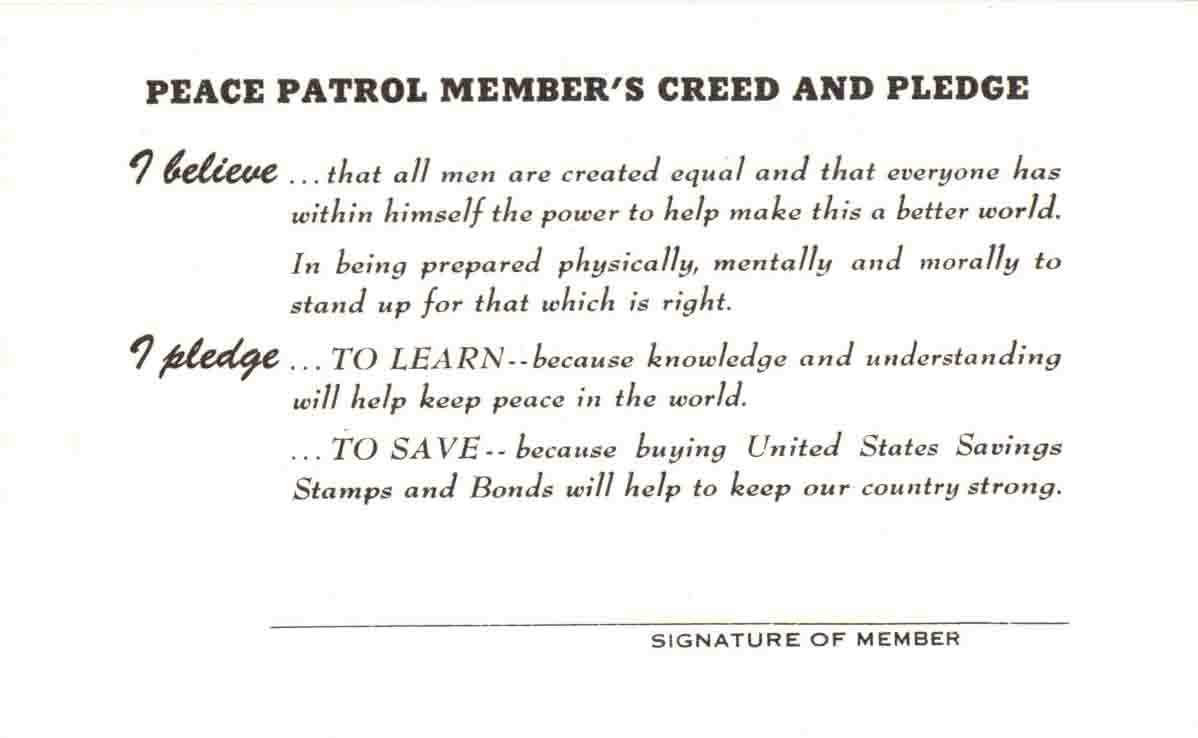 On February 1, 1935, President Franklin D. Roosevelt signed legislation that allowed the U.S. Department of the Treasury to sell a new type of security, called the savings bond, to encourage saving during the Great Depression. The first Series A savings bond was issued a month later, with a face value of $25. They were marketed as a safe investment that was accessible to everyone. Series B, C, and D bonds followed over the next few years.

Series E bonds, referred to as Defensive Bonds, were a major source of financing in the period just before U.S. entry into World War II. On April 30, 1941, Roosevelt purchased the first Series E bond from Treasury Secretary Henry Morgenthau, Jr.; the next day, they were made available to the public. After the attack on Pearl Harbor, Defensive Bonds became known as War Bonds. Stamps featuring a Minuteman statue design in denominations of 10¢, 25¢, 50¢, $1, and $5 were also sold to be collected in booklets which, when filled, could be exchanged to purchase interest-bearing Series E bonds. All the revenue received from the bonds went directly to support the war effort.

After the war ended, savings bonds became popular with families, with purchasers waiting to redeem them so the bonds would grow in value. To help sustain post-war sales, they were advertised on television, films, and commercials. When John F. Kennedy was president, he encouraged Americans to purchase them, which stimulated a large enrollment in savings bonds. By 1976, President Ford helped celebrate the 35th anniversary of the U.S. savings bond program.

In 1990, Congress created the Education Savings Bond program which helped Americans finance a college education. A bond purchased on or after January 1, 1990, is tax-free (subject to income limitations) if used to pay tuition and fees at an eligible institution.

There are two types of savings bonds offered by the Treasury, Series EE and Series I.

Series EE bonds are guaranteed to double in value over the purchase price when they mature 20 years from issuance, though they continue to earn interest for a total of 30 years. Interest accrues monthly, and is compounded semiannually, that is, becomes part of the principal for future interest earning calculations. If a bond's compounded interest does not meet the guaranteed doubling of the purchase price, Treasury will make a one-time adjustment to the maturity value at 20 years, giving it an effective rate of 3.5%. The bond will continue to earn the fixed rate for 10 more years. All interest is paid when the holder cashes the bond.

For bonds issued before May 2005, the interest rate was an adjustable rate recomputed every six months at 90% of the average five-year Treasury yield for the preceding six months. Bonds issued in May 2005 or later pay a fixed interest rate for the life of the bond. Paper EE bonds, last sold in 2011, could be purchased for half their face value; for example, a $100 bond could be purchased for $50, but would only reach its full $100 value at maturity.

Series I bonds have a variable yield based on inflation. The interest rate consists of two components. The first is a fixed rate which will remain constant over the life of the bond; the second component is a variable rate adjusted every six months from the time the bond is purchased based on the current inflation rate. The fixed rate is determined by the Treasury Department; the variable component is based on the Consumer Price Index for urban areas (CPI-U) for a six-month period ending one month prior to the rate adjustment. New rates are published on May 1 and November 1 of every year. As an example, if someone purchases a bond in February, the fixed portion of the rate will remain the same throughout the life of the bond, but the inflation-indexed component will be based on the rate published the previous November. In August, six months after the purchase month, the inflation component will change to the rate that was published in May. During times of deflation, the negative inflation-indexed portion can drop the combined rate below the fixed portion, but the combined rate cannot go below 0% and the bond can not lose value. Like Series EE bonds, interest accrues monthly and is compounded to the principal semiannually. Besides being available for purchase online, taxpayers may purchase Series I bonds using a portion of their tax refund via IRS Form 8888.

For both types, bonds are redeemable after 12 months, but there is a penalty of three months' interest if they are redeemed before 5 years. Tax on the interest is deferred until the bond is redeemed.

The annual purchase limit for electronic Series EE and Series I savings bonds is $10,000 for each series. For paper Series I Savings Bonds purchased through IRS tax refunds the purchase limit is $5,000, which is in addition to the online purchase limit.

Additionally, the Treasury formerly offered Series HH bonds, which were "current income" bonds. Unlike Series EE and I bonds, they did not increase in value, but paid earned interest every six months for 20 years directly to the holder. The interest rate of a Series HH bond was set at purchase and remained that rate for 10 years. After 10 years the rate could change, with the new rate for the remaining 10 year life of the bond. After 20 years, the bond would be redeemed for its original purchase price. Series HH bonds replaced Series H bonds, which were introduced in 1952. Issuance of Series HH bonds ended August 31, 2004. Although no longer sold, Series HH bonds continue to earn interest for 20 years after sale, meaning the last bonds will not mature until 2024.