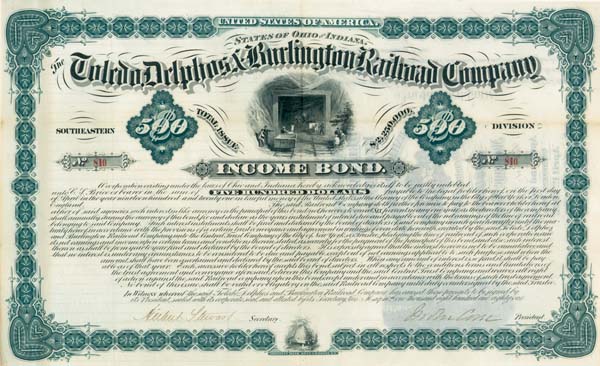 Years: 1881
$500 or $1,000 6% Uncancelled Bond printed by Franklin Bank Note Co., NY. Great train vignette shown below is on back side of bond. The Toledo, Cincinnati and St. Louis Railroad (TC&StL) was a narrow-gauge railroad based in Ohio. It began as a subsidiary of the Toledo, Delphos and Burlington Railroad (TD&B), which was opened on July 4, 1875, but in 1882 the two companies merged and retained the TC&StL name, which was more descriptive of its extent. The financially-troubled system was split at foreclosure in 1884 and 1885 as follows: * Cincinnati Division, built by the TD&B: Dayton, Lebanon and Cincinnati Railroad * Cincinnati Northern Division, ex-Cincinnati Northern Railway: Cincinnati, Lebanon and Northern Railway * Dayton Division, completed by the TD&B: Dayton and Toledo Railroad * Iron Division, ex-Iron Railroad: Iron Railway * St. Louis and Toledo Divisions (split at Kokomo), completed by the TC&StL: Toledo, St. Louis and Kansas City Railroad * Southeastern Division, ex-Dayton and South Eastern Railroad: Dayton and Ironton Railroad
Condition: Excellent

Item ordered may not be exact piece shown. All original and authentic.
Email this to a friend
Request Info
Previous Item (Monongahela Railway - Bond)    (Syracuse Northern Railroad - Bond) Next Item