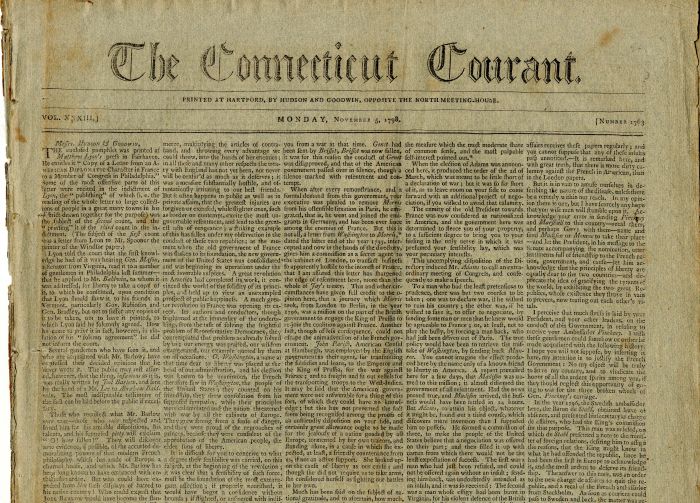 4 pages of the Connecticut Courant for Monday, November 5, 1798. Some paper loss and creasing. Top half of 1st page shown.

The Hartford Courant is the largest daily newspaper in the U.S. state of Connecticut, and is considered to be the oldest continuously published newspaper in the United States. A morning newspaper serving most of the state north of New Haven and east of Waterbury, its headquarters on Broad Street in Hartford, Connecticut is a short walk from the state capitol. It reports regional news with a chain of bureaus in smaller cities and a series of local editions. It also operates CTNow, a free local weekly newspaper and website.

The Courant began as a weekly called the Connecticut Courant on October 29, 1764, becoming daily in 1837. In 1979, it was bought by the Times Mirror Company. In 2000, Times Mirror was acquired by the Tribune Company, which later combined the paper's management and facilities with those of a Tribune-owned Hartford television station. The Courant and other Tribune print properties were spun off to a new corporate parent, Tribune Publishing, separate from the station, in 2014. Tribune Publishing agreed in May 2021 to be acquired by Alden Global Capital, which operates its media properties through Digital First Media. The transaction was finalized on May 25, 2021. Read more at https://en.wikipedia.org/wiki/Hartford_Courant

Condition: Good
Item ordered may not be exact piece shown. All original and authentic.
OUT OF STOCK
Request re-stock notice?
Email this to a friend
Request Info
Previous Item (City of Philadelphia - $100)    (Civil War Discharge Papers) Next Item