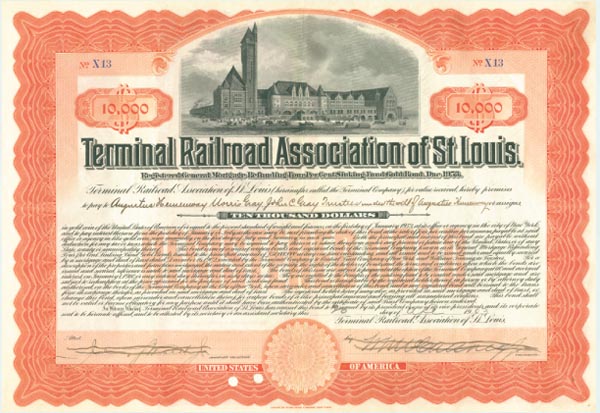 The Terminal Railroad Association of St. Louis (reporting mark TRRA) is a switching and terminal railroad that handles traffic in the St. Louis, Missouri, metropolitan area. It is co-owned by several Class I railroads that reach the city.

It was founded in 1889 in a deal orchestrated by Jay Gould with:

Its current owners are:

It also connects with the Kansas City Southern Railway; the Canadian Pacific Railway is the only Class I railroad that does not reach St. Louis.

The railroad's predecessor companies in St. Louis date to 1797, when the town was still part of Spanish Upper Louisiana. James Piggott was granted a license to operate a ferry between St. Louis and Illinoistown (now East St. Louis, Illinois). In 1819, Piggott's heirs sold the ferry to Samuel Wiggins, who operated the service with eight horses until a steam-powered ferry took over in 1828.

In 1832, Wiggins sold the Wiggins Ferry Service and 800 acres (3.2 km2) of land in East St. Louis, including Bloody Island, to new owners, who began developing a rail yard on the Illinois property. In 1870, the ferry began porting rail cars across the river one car at a time until the 1874 completion of the Eads Bridge.

The Association built Union Station. It owns the Merchants Bridge and MacArthur Bridge, the latter which it received in 1989 in a swap with the City of St. Louis in exchange of title for the Eads Bridge.

The railroad's practice of charging a tariff to coal trains crossing the Mississippi River would persuade several industries to set up shop in Illinois rather than Missouri. The steelmaking town of Granite City, Illinois, was founded to avoid the tariffs.

For four years beginning in 2001, TRRA received the Gold E. H. Harriman Award for safety in the Switching and Terminal railroad class.

The TRRA operates the following lines: