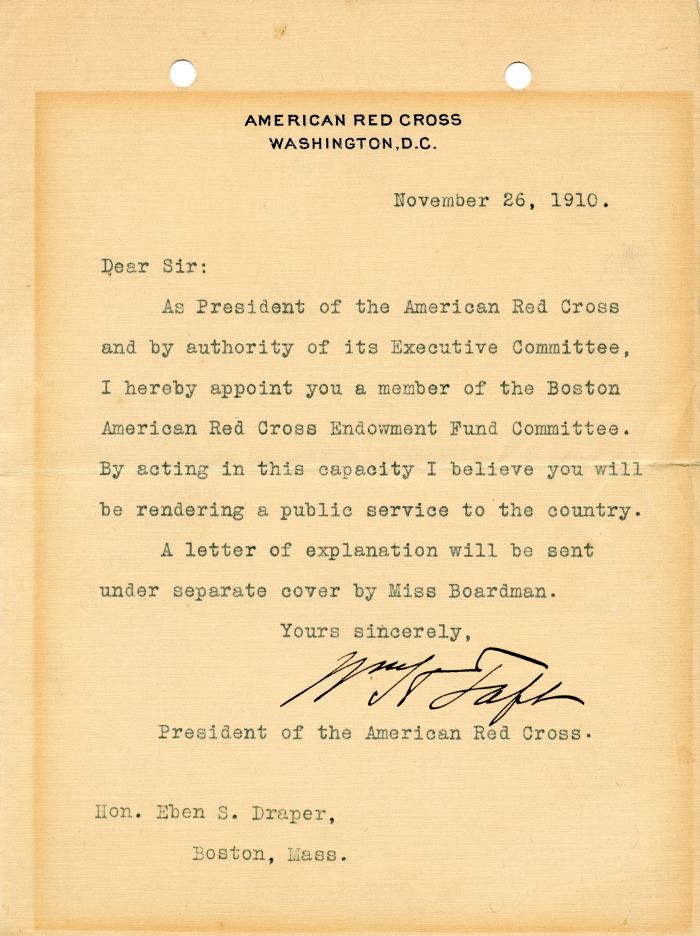 Typed letter for the appointment of a member of the Boston American Red Cross Endowment Fund Committee signed by Wm. H. Taft.

William Howard Taft (1857-1930) William Howard Taft (September 15, 1857  March 8, 1930) was the 27th President of the United States (19091913) and later the tenth Chief Justice of the United States (19211930). He is the only person to have served in both of these offices. Before becoming President, Taft, a Republican, was appointed to serve on the Superior Court of Cincinnati in 1887. In 1890, Taft was appointed Solicitor General of the United States and in 1891 a judge on the United States Court of Appeals for the Sixth Circuit. In 1900, President William McKinley appointed Taft Governor-General of the Philippines. In 1904, President Theodore Roosevelt appointed Taft Secretary of War in an effort to groom Taft, then his close political ally, into his handpicked presidential successor. Taft assumed a prominent role in problem solving, assuming on some occasions the role of acting Secretary of State, while declining repeated offers from Roosevelt to serve on the Supreme Court. Riding a wave of popular support for fellow Republican Roosevelt, Taft won an easy victory in his 1908 bid for the presidency. In his only term, Taft's domestic agenda emphasized trust-busting, civil service reform, strengthening the Interstate Commerce Commission, improving the performance of the postal service, and passage of the Sixteenth Amendment. Abroad, Taft sought to further the economic development of nations in Latin America and Asia through "Dollar Diplomacy", and showed decisiveness and restraint in response to revolution in Mexico. The task-oriented Taft was oblivious to the political ramifications of his decisions, often alienated his own key constituencies, and was overwhelmingly defeated in his bid for a second term in the presidential election of 1912. In surveys of presidential scholars, Taft is usually ranked near the middle of lists of all American Presidents. Taft did not enjoy the easy relationship with the press that Roosevelt had, choosing not to offer himself for interviews or photo opportunities as often as the previous president had done. When a reporter informed him he was no Teddy Roosevelt, Taft replied that his main goal was to "try to accomplish just as much without any noise". Taft even made executive decisions demonstrating his indifference with the press. Indeed, Taft's administration marked a change in style from the political charisma of Roosevelt to the passion of Taft for the rule of law. Taft, in fashioning his cabinet, showed also that he was not unwilling to depart to some degree from Roosevelt's progressivism; he named an anti-progressive, Philander Chase Knox Secretary of State, who had primary influence over other appointments. Taft considered himself a progressive, in part from his belief in an expansive use of the rule of law, as the prevailing device that should be actively used by judges and others in authority to solve society's, and even the world's, problems. But his devotion to the law also often made Taft a slave to precedent, and less adroit in politics than Roosevelt; he therefore lacked the flexibility, creativity and personal magnetism of his mentor, not to mention the publicity devices, the dedicated supporters, and the broad base of public support that made Roosevelt so formidable. After leaving office, Taft spent his time in academia, arbitration, and the pursuit of world peace through his self-founded League to Enforce Peace. In 1921, after the First World War, President Warren G. Harding appointed Taft Chief Justice of the United States. He served in this capacity until shortly before his death in 1930.