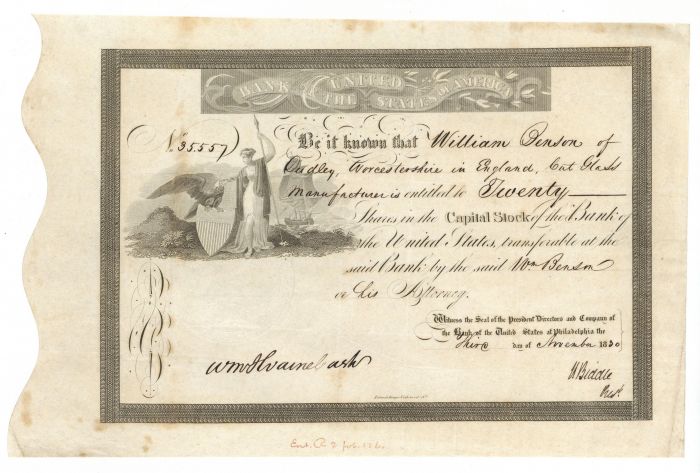 Early stock for the Bank of the United States signed by N. Biddle. Rare!

The ancestors of the Biddle family immigrated to Pennsylvania with William Penn, and fought in the pre-Revolutionary colonial struggles. In the American Revolution, Charles, father of Nicholas, was prominent in devotion to the cause, while his uncle, Nicholas Biddle was an early naval hero. Another uncle, Edward Biddle, was a member of the congress of 1774. Biddle was well educated; he graduated quite young from Princeton, in 1801 as valedictorian.

Biddle was offered an official position before he had finished his law studies. As secretary to John Armstrong, United States minister to France, he went abroad in 1804, was in Paris at the time of Napoleon's coronation, and afterward, Biddle participated in an audit related to the Louisiana Purchase, acquiring his first experience in financial affairs. Biddle traveled extensively through Europe, returning to England to serve as secretary for James Monroe, then United States minister to the Court of St. James. At Cambridge, Biddle took part in a conversation involving a comparison between the modern Greek dialect with that of Homer with Cambridge professors. The incident captured Monroe's attention.

In 1807, Biddle returned home to practice law and write, contributing papers on various subjects, but chiefly on the fine arts, to different publications. He became associate editor of a magazine called Port-Folio, which ran from 1806 to 1823. When editor Joseph Dennie died in 1812, Biddle took over the magazine.

Biddle also prepared Lewis and Clark's report of their exploring expedition to the mouth of Columbia River for publication. He encouraged Thomas Jefferson to write an introductory memoir of Captain Meriwether Lewis. Biddle's name does not appear, as he was elected to the state legislature (1810-1811), and was compelled to turn over the whole work to Paul Allen, who supervised its publication, and, with the consent of all parties, was the recognized editor. However, Robert T. Conrad has said that Biddle actually wrote the two volumes from Lewis and Clark's notes.

In the legislature Biddle quickly became prominent. He originated a bill favoring popular education, a quarter of a century in advance of the times. The bill was defeated, but came up again in different forms until, in 1836, the Pennsylvania common-school system was inaugurated as an indirect result of his efforts.

Condition: Excellent
Item ordered may not be exact piece shown. All original and authentic.
Email this to a friend
Request Info
Previous Item (City of Philadelphia - $100)    (Civil War Discharge Papers) Next Item