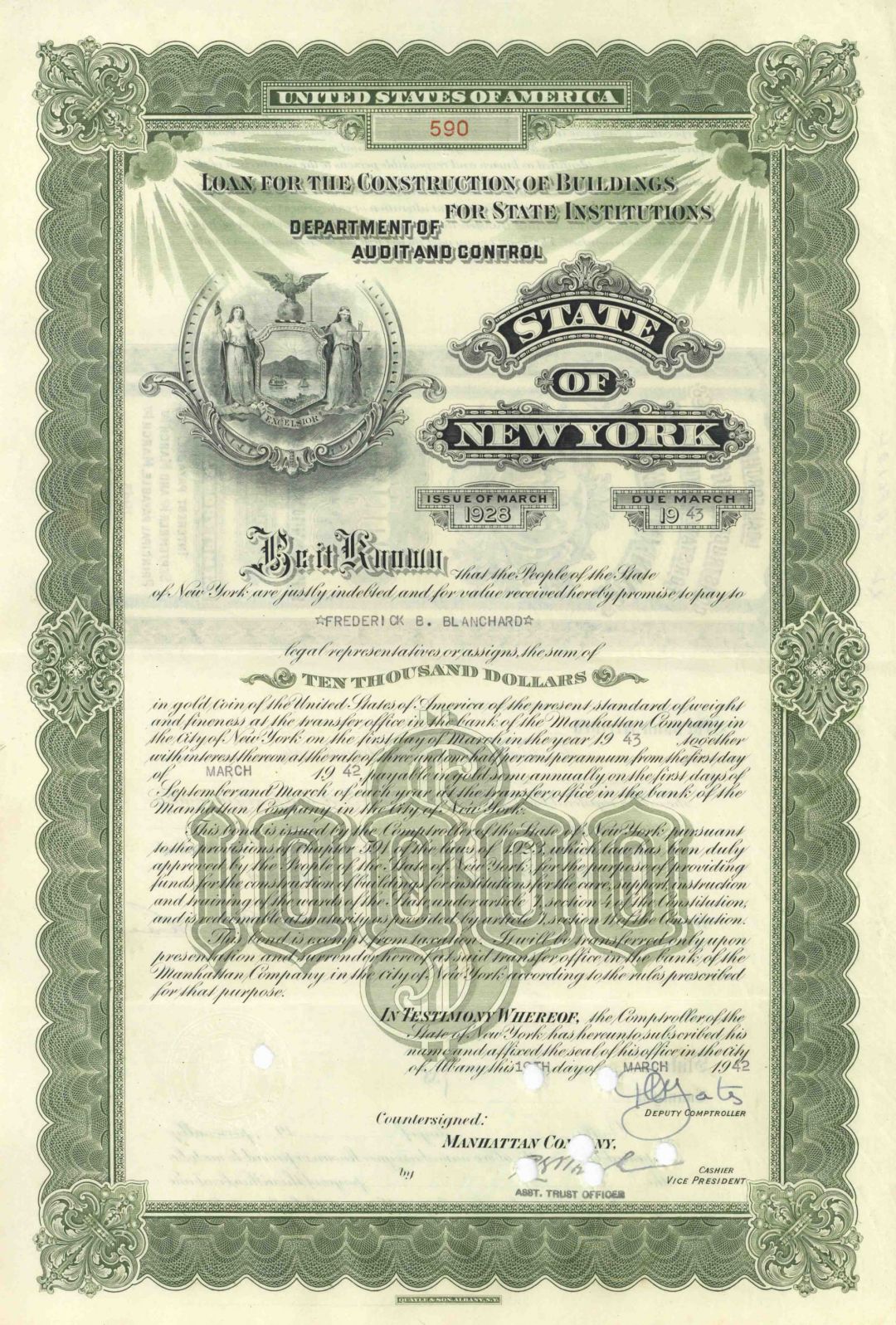 The coat of arms of the state of New York was formally adopted in 1778, and appears as a component of the state's flag and seal.

The shield displays a masted ship and a sloop on the Hudson River (symbols of inland and foreign commerce), bordered by a grassy shore and a mountain range in the background with the smiling sun rising behind it. The unheraldic nature of the Hudson River landscape reveals the modern origin of the design.

The shield has two supporters:

A banner below the shield shows the motto Excelsior, a Latin word meaning "higher", "superior", "lordly", commonly translated as "Ever Upward." Following the adoption of the 2021 State Budget in April 2020, a secondary motto, E pluribus unum, appears.

Flags bearing the pre-2020 coat of arms (i.e. without the motto E pluribus unum) are still widely used so long as serviceable.

The shield is surmounted by a crest consisting of an eagle surmounting a world globe.

New York, officially known as the State of New York, is a state in the Northeastern United States. It is sometimes called New York State to distinguish it from its largest city, New York City. With a total area of 54,556 square miles (141,300 km2), New York is the 27th largest U.S. state geographically. With 20.2 million residents, it is the fourth most populous state in the United States as of 2021, with approximately 44% living in New York City, including 25% of the states population within Brooklyn and Queens, and another 15% on the remainder of Long Island. The State of New York is bordered by New Jersey and Pennsylvania to the south, and Connecticut, Massachusetts, and Vermont to the east; it has a maritime border with Rhode Island, east of Long Island, as well as an international border with the Canadian provinces of Quebec to the north and Ontario to the northwest.

New York City (NYC) is the most populous city in the United States, and around two-thirds of the state's population lives in the New York metropolitan area, the worlds largest urban landmass. NYC is home to the United Nations headquarters, and has been described as the cultural, financial, and media capital of the world, as well as the world's most economically powerful city, and is sometimes described as the capital of the world. The next five most populous cities in the state are Buffalo, Yonkers, Rochester, Syracuse, and the state capital of Albany.

New York has a diverse geography. The southeastern part of the state, the area known as Downstate, is situated on the Atlantic coastal plain and includes Long Island and several smaller associated islands, as well as New York City and the lower Hudson River Valley. The much larger Upstate New York area spreads from the Great Lakes to Lake Champlain and the border of Pennsylvania, and includes a diverse topography and range of regions including the Adirondack Mountains in the northeastern lobe of the state. New York also includes several ranges of the wider Appalachian Mountains. The eastwest Mohawk River Valley is the primary river valley bisecting more mountainous regions, and connects into the North-South Hudson River valley in the Capital Region of New York. Western New York is part of the Great Lakes region and borders on the Great Lakes of Lake Ontario and Lake Erie, as well as Niagara Falls. Between the central part of the state and Western part of the state, New York is dominated by the Finger Lakes, a popular vacation and tourist destination.

New York was one of the original Thirteen Colonies forming the United States. The area of present-day New York had been inhabited by tribes of the Algonquians and the Iroquois confederacy Native Americans for several hundred years by the time the earliest Europeans arrived. French colonists and Jesuit missionaries arrived southward from Montreal for trade and proselytizing. In 1609, the region was visited by Henry Hudson sailing for the Dutch East India Company. The Dutch built Fort Nassau in 1614 at the confluence of the Hudson and Mohawk rivers, where the present-day capital of Albany later developed. The Dutch soon also settled New Amsterdam and parts of the Hudson Valley, establishing the multiethnic colony of New Netherland, a center of trade and immigration. England seized the colony from the Dutch in 1664, with the Dutch recapturing their colony in 1673 before definitively ceding it to the English as a part of the Treaty of Westminster the following year. During the American Revolutionary War (17751783), a group of colonists of the Province of New York attempted to take control of the British colony and eventually succeeded in establishing independence. In the early 19th century, New York's development of its interior, beginning with the Erie Canal, gave it incomparable advantages over other regions of the east coast and built its political and cultural ascendancy.

Many landmarks in New York are well known, including four of the world's ten most-visited tourist attractions in 2013: Times Square, Central Park, Niagara Falls, and Grand Central Terminal. New York is also home to the Statue of Liberty. In the 21st century, New York has emerged as a global node of creativity and entrepreneurship, social tolerance, and environmental sustainability. New York has approximately 200 colleges and universities, including the State University of New York. Several universities in New York have been ranked among the top 100 in the nation and world.