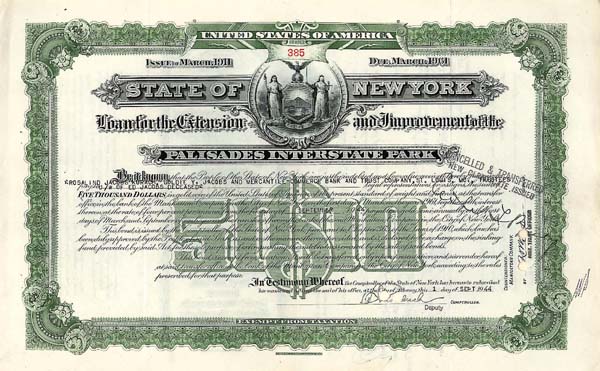 Palisades Interstate Park and its governing body, the Palisades Interstate Park Commission, was formed under an interstate compact in 1900 by governors Theodore Roosevelt of New York and Foster M. Voorhees of New Jersey in response to the destruction of the Palisades by quarry operators in the late 19th century. The Palisades are the cliffs on the west bank of the Hudson River across from and continuing north of Manhattan Island. The commission consists of ten commissioners, five appointed by each governor, who serve staggered five-year terms.

In 1900, George W. Perkins was appointed chairman of the newly formed commission by Governor Roosevelt. He hired Major William A. Welch as assistant engineer, and in 1914 named him chief engineer and general manager. Under Welch's leadership, the Palisades Interstate Park grew from the initial 10,000-acre (40 km2) Bear Mountain State Park to the more than 40,000-acre (160 km2) Harriman State Park. By 1919 nearly a million people a year were coming to the park.

When work started on the park there were no models or precedents for an endeavor of its nature and scope. Welch organized a massive reforestation program, built twenty-three new lakes, 100 miles (160 km) of scenic drives and one hundred and three children's camps, where 65,000 urban children enjoyed the outdoors each summer. He helped found the Palisades Interstate Park Trail Conference, which later became the New YorkNew Jersey Trail Conference, and he served as chairman of the Appalachian Trail Conference.

The park system has been expanded over the years to include nineteen state parks and nine historic sites, covering over 100,000 acres (400 km2) along more than 20 miles (32 km) of Hudson River shoreline and beyond. The commission also oversees and operates the Palisades Interstate Parkway, built between 1947 and 1958. The commission also owns four additional parkways that traverse its parks, although two are partially or wholly maintained by the New York State Department of Transportation, while the rest are both owned and maintained by PIPC.

The Palisades Interstate Park in New Jersey is about 12 miles long and half a mile wide at its widest point, the average width of the facility is about 575 yards wide. It covers an area of 2,500 acres (3.9 sq.mi.). The park contains uplands, cliffs and the Hudson River shorefront. PIP has more than 30 miles of hiking and ski trails.

Item ordered may not be exact piece shown. All original and authentic.
Email this to a friend
Request Info
Previous Item (State of NY-Loan For The Construction of Buildings For State Institutions - Bond)    (State of New York - Park System Bond) Next Item