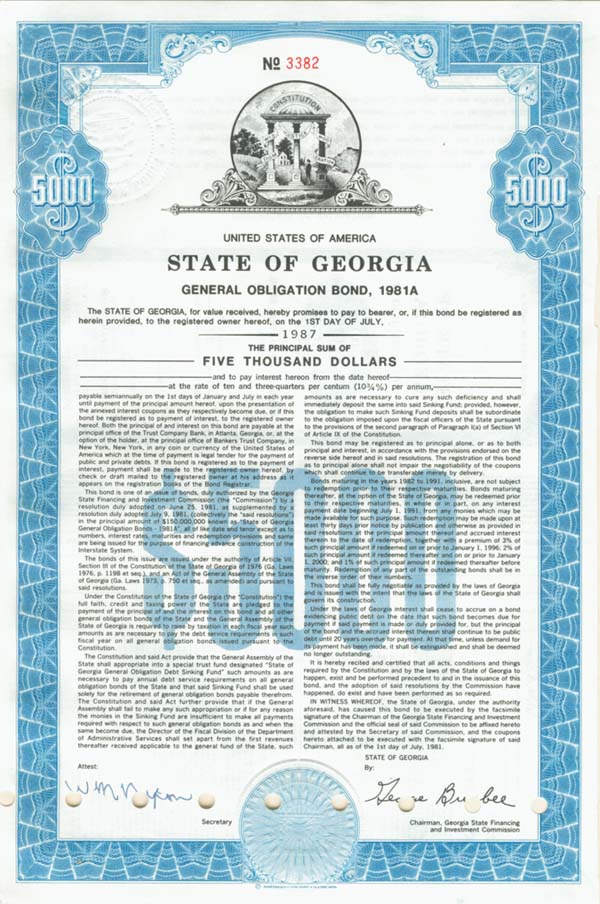 Georgia is a state in the Southeastern Region of the United States. Georgia is the 24th-largest in area and 8th-most populous of the 50 United States. Georgia is bordered to the north by Tennessee and North Carolina, to the northeast by South Carolina, to the southeast by the Atlantic Ocean, to the south by Florida, and to the west by Alabama. Its 2019 estimated population was 10,617,423, according to the U.S. Census Bureau. Atlanta, a "beta(+)" global city, is both the state's capital and its largest city. The Atlanta metropolitan area, with an estimated population of more than 6 million people in 2019, is the 9th most populous metropolitan area in the United States and contains about 57% of Georgia's entire population.

Founded in 1733 as a British colony, Georgia was the last and southernmost of the original Thirteen Colonies to be established. Named after King George II of Great Britain, the Colony of Georgia covered the area from South Carolina south to Spanish Florida and west to French Louisiana at the Mississippi River. On January 2, 1788, Georgia became the fourth state to ratify the United States Constitution. From 1802 to 1804, western Georgia was split to form the Mississippi Territory, which later was admitted as the U.S. states of Alabama and Mississippi. Georgia declared its secession from the Union on January 19, 1861, and was one of the original seven Confederate States. Following the Civil War, it was the last state to be restored to the Union, on July 15, 1870. In the post-Reconstruction era, Georgia's economy was transformed as a group of prominent politicians, businessmen, and journalists, led by Henry W. Grady, espoused the "New South" philosophy of sectional reconciliation, industrialization, and white supremacy. During the 20th century, several Georgians, most notably Martin Luther King Jr., were prominent leaders during the civil rights movement. Since 1945, Georgia has seen substantial population growth as part of the broader Sun Belt phenomenon. From 2007 to 2008, 14 of Georgia's counties ranked among the nation's 100 fastest-growing.

Georgia is defined by a diversity of landscapes, flora, and fauna. The state's northernmost regions include the Blue Ridge Mountains, part of the larger Appalachian Mountain system. The Piedmont plateau extends from the foothills of the Blue Ridge south to the Fall Line, an escarpment to the coastal plain defining the state's southern region. Georgia's highest point is Brasstown Bald at 4,784 feet (1,458 m) above sea level; the lowest is the Atlantic Ocean. With the exception of some high-altitude areas in the Blue Ridge, the entirety of the state has a humid subtropical climate. Of the states entirely east of the Mississippi River, Georgia is the largest in land area.