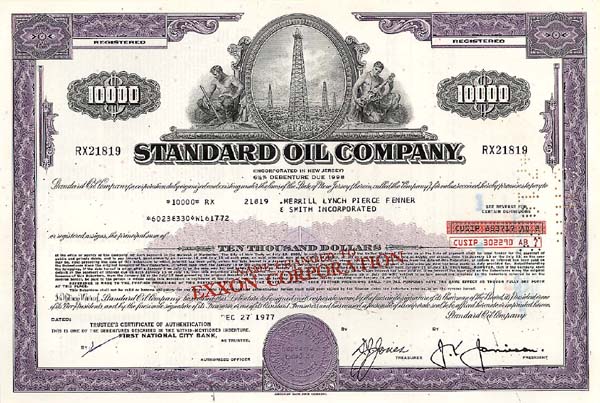 Exxon is the brand name of the oil and natural resources company Exxon Corporation which was, prior to 1972, known as Standard Oil Company of New Jersey. In 1999, Exxon Corporation merged with Mobil to form ExxonMobil. The Exxon brand is still used by ExxonMobil's downstream operations as a brand for certain gas stations, motor fuel and related products (the highest concentration of which are located in New Jersey, Pennsylvania, Texas and in the Mid-Atlantic and Southeastern states). Standard Oil Company of New Jersey was one of the Seven Sisters that dominated the global petroleum industry from the mid-1940s to the 1970s.

In states where it was restricted from using the Esso name, the company marketed under the Humble or Enco brands. The Humble brand was used at Texas stations for decades, as those operations were under the direction of Standard Oil Company of New Jersey affiliate Humble Oil & Refining Company. In the middle to late 1950s, the use of the Humble brand spread to other southwestern states, including Arizona, New Mexico, and Oklahoma.

In 1959, Standard Oil Company of New Jersey secured full control of Humble Oil and restructured it into its U.S. marketing and refining division, to market nationwide under the Enco, Esso, and Humble brands. Enco was created as an acronym for the phrase "Energy Company". Humble introduced the Enco brand in 1960 in Oklahoma and surrounding states, to replace Humble's subsidiary Oklahoma and Pate brands. Humble also tried marketing under Enco in Ohio, but Standard Oil Company of Ohio (Sohio) protested that the Enco name and logo (a white oval with a blue border and red lettering) too closely resembled that of Esso. Consequently, stations in Ohio were rebranded as Humble and remained so until the Exxon brand came into use.

After the Enco brand was discontinued in Ohio, it was moved to other non-Esso states. In 1961, Humble stations in Arizona, New Mexico, Oklahoma, and Texas were rebranded to Enco. That same year, Enco appeared on former Carter stations in the Midwest and the Pacific Northwest.

In 1963, Humble Oil and Tidewater Oil Company began negotiating a sale of Tidewater's West Coast refining and marketing operations. The sale would have given Humble Oil many existing Flying A stations and distributorships, as well as a refinery in California, the nation's fastest-growing gasoline market. However, the Justice Department objected to the sale on anti-trust grounds. (In 1966, Phillips Petroleum Company bought Tidewater's western properties and rebranded all Flying A outlets to Phillips 66.)

In 1966, the U.S. Justice Department ordered Humble Oil to "cease and desist" from using the Esso brand at stations in several southeastern states, following protests from Standard Oil of Kentucky (Kyso), which was a Standard Oil of California subsidiary in the process of rebranding its Standard stations to Chevron. By 1967, Humble Oil's Esso stations in the Southeast were rebranded to Enco.

In the 1960s and early 1970s, Humble Oil continued to have difficulties promoting itself as a nationwide marketer of petroleum products, despite a number of high-profile marketing strategies. These included the popular "Put a Tiger in Your Tank" advertising campaign and accompanying tiger mascot created by American illustrator Bob Jones, to promote Enco Extra and Esso Extra gasolines. Humble Oil also used similar logotypes, use of the Humble name in all Enco and Esso advertising, and uniform designs for all stations regardless of brand. In addition, Humble Oil was a major promoter and broadcast sponsor for college football in the Pacific-8 (now Pac-12) and Southwestern conferences.

But Humble Oil still faced stiff competition from national brands such as Shell and Texaco, which at that time was the only company to market under one brand name in all 50 states. By the late 1960s, Humble officials realized that the time had come to develop a new brand name that could be used nationwide. At first, consideration was given to simply rebranding all stations as Enco, but that was shelved when it was learned that the word "Enco" is similar in pronunciation to the Japanese slang term enko, meaning "stalled car" (an abbreviation of enjin no kosho, "engine breakdown").

In 1972, Exxon was unveiled as the new, unified brand name for all former Enco and Esso outlets. At the same time, the company changed its corporate name from Standard Oil of New Jersey to Exxon Corporation. The rebranding came after successful test-marketing of the Exxon name, under two experimental logos, in the fall and winter of 19711972. Along with the new name, Exxon settled on a rectangular logo using red lettering and blue trim on a white background, similar to the familiar color scheme on the old Enco and Esso logos.

The company initially planned to change its name to "Exon", in keeping with the four-letter format of Enco and Esso. However, during the planning process, it was noted that James Exon was the governor of Nebraska. Renaming the company after a sitting governor seemed ill-advised. George T. Piercy, a senior member of the board of directors suggested adding an X resulting in the new EXXON name.

The unrestricted international use of the popular Esso brand prompted Exxon to continue using it outside the U.S. Esso is the only widely used Standard Oil descendant brand left in existence. Others, such as Chevron, maintain a few Standard-branded stations in specific states in order to retain their trademarks, and prevent others from using them.

On March 24, 1989, in what is regarded as one of the worst oil spills in American history, a tanker owned by Exxon, the Exxon Valdez, crashed into Bligh Reef, spilling its cargo of over ten million gallons of crude oil into the Prince William Sound in Alaska and causing the deaths of hundreds of thousands of seabirds and sea mammals. The ship was piloted by a captain with a history of drunk driving convictions, and Exxon was ordered by a jury to pay punitive damages in the amount of $5 billion. This judgment was eventually reduced, after multiple appeals, to just $500 million by 2008.

As a result of the COVID-19 pandemic, in July 2020, Exxon announced deep spending and job position cuts in order to save an 8% shareholder dividend. According to Reifinitiv Eikon data, the company experienced $2.63 billion loss and their shares were down by 35%. Later in October 2020, Exxon released a statement which expanded on the planned cuts, stating that 15 percent of the company's global workforce would be fired over the next two years, including layoffs of 1,900 U.S. jobs, reducing the total global workforce by 14,000 employees. In February 2021, Exxon announced that in 2020 it registered a lost of $22.4 billion adding that it was planning to invest $ 3 billion in the next 4 years.

Under the guidance of its paid consultants at Boston Consulting Group, Exxon announced in the 1970s that it would compete against IBM and Xerox. The mantra was Information Is the Oil of the 21st Century. It launched Exxon Office Systems, which predictably failed, since "the giant oil company failed to fully realize the subtleties of managing small high-tech companies." In the early 1980s, Exxon retailed its fax machines and software through Sears. Exxon announced the closure of the venture at the end of 1984.

In 1989, Exxon announced that it was moving its headquarters, including about 300 employees, from Manhattan, New York City to the Las Colinas area of Irving, Texas. Exxon sold the Exxon Building (1251 Avenue of the Americas), its former headquarters in Rockefeller Center, to a unit of Mitsui Real Estate Development Co. Ltd. in 1986 for $610 million. John Walsh, president of Exxon subsidiary Friendswood Development Company, stated that Exxon left New York because the costs were too high. In 2009 Exxon partnered with Turner Ridge Capital Management to develop and finance their U.S. alternative energy infrastructure.

In 2016, ExxonMobil successfully asked a U.S. federal court to lift the aforementioned trademark injunction that banned it from using the Esso brand in various states. By this time, as a result of numerous mergers and rebranding, the remaining Standard Oil companies that previously objected to the Esso name had been acquired by BP. ExxonMobil cited trademark surveys in which there was no longer possible confusion with the Esso name as it was more than seven decades before. BP also had no objection to lifting the ban. ExxonMobil did not specify whether they would now open new stations in the U.S. under the Esso name; they were primarily concerned about the additional expenses of having separate marketing, letterheads, packaging, and other materials that omit "Esso".

The rectangular Exxon logo, with the blue strip at the bottom and red lettering with the two 'X's interlinked together, was designed by noted industrial stylist Raymond Loewy. The interlinked 'X's are incorporated in the modern-day ExxonMobil corporate logo; in mid-2016, as part of a corporate rebranding accompanying the launch of ExxonMobil's "Synergy" fuel products, the mixed-case Exxon wordmark from the ExxonMobil corporate logo became the brand's main logo.

In 1985, Minolta introduced an autofocus SLR camera system named "Maxxum" in the United States. Originally, cameras (such as the Maxxum 7000) lenses and flashes used a logo with the X's crossed in 'MAXXUM'. Exxon considered this a violation of their trademark, and as a result, Minolta was allowed to distribute cameras already produced, but was forced to change the stylistic 'XX' and implement this as a change in new production. ExxonMobil similarly sued 21st Century Fox over its cable channel FXX, but the parties agreed to dismiss the suit in October 2015.

Exxon is ExxonMobil's primary retail gasoline brand in most of the United States, with the highest concentration of retail outlets located in New Jersey, Pennsylvania, Texas, and in the Mid-Atlantic and Southeastern states. The Exxon brand also has a market presence in the following metropolitan areas:

Mobil is the company's primary retail gasoline brand in California, Florida, New York, New England, the Great Lakes, and the Midwest. Esso is ExxonMobil's primary gasoline brand worldwide except in Australia, Guam, Mexico, Nigeria, and New Zealand, where the Mobil brand is used exclusively. In Colombia, Canada, and Egypt, as well as formerly Japan and Malaysia, both the Esso and Mobil brands are used, in which the latter was rebranded as Petron in 2013, and ENEOS for the former in 2019, respectively. The Mobil brand is applied to each Esso fuel tanks in Hong Kong and Singapore.