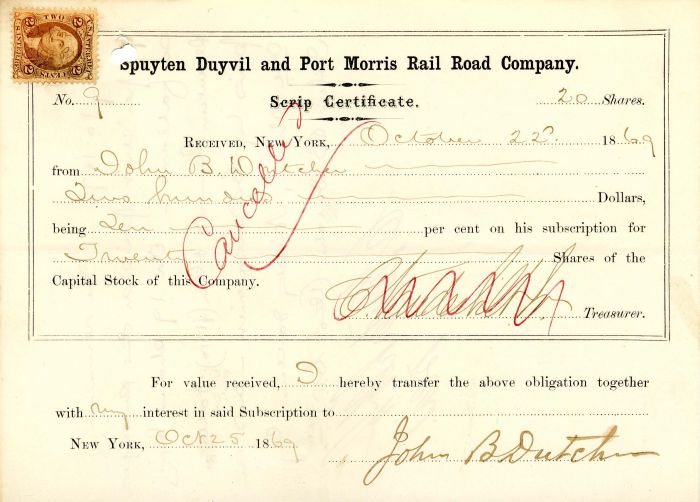 Commodore Cornelius Vanderbilt
(1794-1877)
Steamship and railroad promoter; Capitalist.  Founder of the family fortune which exists yet today, Vanderbilt stands as one of the greatest American capitalists.  Vanderbilt began his rise at 16, as the owner-operator of a small ferryboat which ran between Staten Island and New York City.  In 1829, after some years of running a hotel and various other enterprises, Vanderbilt entered the steamboat business on his own, operating a shipping service on the Hudson.  By the early 1850s, he had established numerous shipping lines, with routes to Europe and to San Francisco via a Nicaraguan land route, and was widely considered the leading steamboat owner in the U.S.  He acquired the title, "Commodore," sometime around 1845 as a result of his shipping interests.  As he neared 70, Vanderbilt sold his shipping interests and turned his attention to railroads, a move which resulted in the creation of one the nation's great transportation systems.  He began, in the early 1860s, by gaining control of the New York & Harlem Railroad, followed shortly after by the run-down Hudson River Railroad.  In both cases, Daniel Drew and other stock manipulators tried to make a killing at Vanderbilt's expense by short-selling stock in these companies, then trying to force the stock price down.  Vanderbilt outwitted them, however, and many either lost substantial amounts of money or were ruined.  In 1867, Vanderbilt acquired the New York Central Railroad and, in 1869, merged it with the Hudson River RR, thus forming the New York Central & Hudson River Railroad.  In 1868, Vanderbilt attempted to gain control of the Erie Railroad, but was, at last, outwitted by Drew, James Fisk, and Jay Gould, who were in control of the railroad and dumped 50,000 shares of fraudulent stock on the market for the unwitting Vanderbilt to buy up.  The trio then escaped to New Jersey to avoid both Vanderbilt's wrath and prosecution for their scheme.  Vanderbilt's well-documented battles with Drew and Gould for control of the New York & Harlem, Hudson River and Erie railroads form some of the most colorful and exciting pages in U.S. financial history.  In 1873, convinced by his son, William, that they should extend their rail system to Chicago, Vanderbilt bought the Lake Shore & Michigan Southern Railway and, in 1875, the Michigan Central and Canada Southern railroads.  During the panic of 1873, Vanderbilt announced that the New York Central was paying its dividends as usual, and he let out contracts for the construction of the Grand Central Terminal.  In this way, Vanderbilt used his wealth as stabilizing influence in the U.S. economy during the last years of his life.