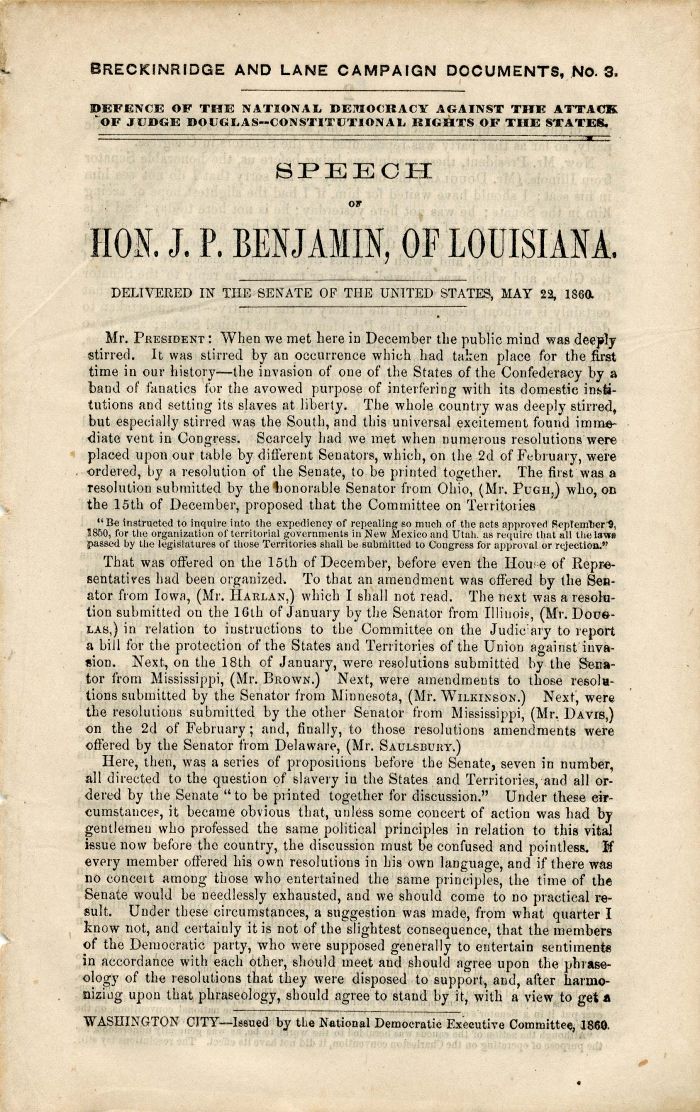 24 page speech of the Breckinridge and Lane Campaign documents by Hon. J.P. Benjamin, of Louisiana. Rare!

Judah Philip Benjamin (1811-1884) An American politician and lawyer, who served as a representative in the Louisiana state legislature, as U.S. Senator for Louisiana, in three successive Cabinet posts in the government of the Confederate States of America, and as a distinguished barrister and Queen's Counsel in England. He was the second Jew to serve as a U.S. Senator and the first in the Cabinet of a North American government, and had the opportunity to be the first Jewish nominee to the U.S. Supreme Court, though he declined the position. Jefferson Davis appointed Benjamin to be the first Attorney General of the Confederacy on Feb. 25, 1861, remarking later that he chose him for the position because he "had a very high reputation as a lawyer, and my acquaintance with him in the Senate had impressed me with the lucidity of his intellect, his systematic habits, and capacity for labor." Benjamin has been often referred to as "the Brains of the Confederacy." In September of the same year, he became the acting Secretary of War, and in November he was confirmed in the post. He became a lightning rod for popular discontent with the Confederacy's military situation, and came to quarrel particularly with the Confederate Generals P.G.T. Beauregard and Stonewall Jackson. The criticism came to a head over the loss of Roanoke Island to the Union "without a fight" in February 1862. Roanoke's commander, Brig. Gen. Henry A. Wise was in desperate need of reinforcements when he was informed of the imminent Federalist attack. He begged for the 13,000 idle men under the control of Maj. Gen. Benjamin Huger in nearby Norfolk, Va, but his pleas to Huger and secretary of war Benjamin went unheeded. The heavily outnumbered Confederate force of some 2,500 surrendered and were taken prisoner after losing nearly a hundred of their number - which was incorrectly presented in the South as their having "surrendered without a shot being fired" Cries of indignation and anger were heard throughout the South. Rather than publicly reveal the pressing shortage of military manpower that had led to the decision not to defend Roanoke, he accepted Congressional censure for the action without protest and resigned his position. As a reward for his loyalty, Davis appointed him Secretary of State in March 1862. Benjamin's foremost goal as Secretary of State was to draw the United Kingdom into the war on the side of the Confederacy. In 1864, as the South's military position became increasingly desperate, he came to publicly advocate a plan where any slave who was willing to bear arms for the Confederacy would be emancipated and inducted into the military; this would have the dual effect of removing the greatest obstacle in British public opinion to an alliance with the Confederacy, popular aversion to slavery, and easing the shortage of soldiers that crippled the South's military efforts. He is pictured on the CSA $2.00 bill. In the immediate aftermath of the end of the war, a rumor that Benjamin had masterminded the assassination of Abraham Lincoln through his intelligence apparatus became popular. Fearing that he could never receive a fair trial in the atmosphere of the time, he burnt his papers and fled to England under a false name. In June 1866, he was called to the bar in England, the beginning of a successful and lucrative second career as a barrister. In 1868, he published his Treatise on the Law of Sale of Personal Property, which came to be regarded as one of the classics of its field. The work's current edition remains authoritative under the name Benjamin's Sale of Goods. In 1872 he became Queen's Counsel. He died in Paris on May 6, 1884, and was interred at Père Lachaise cemetery under the name of Philippe Benjamin.