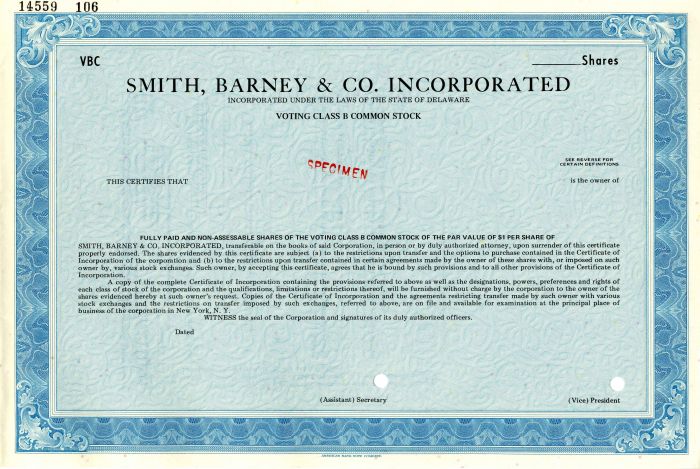 Morgan Stanley Wealth Management is an American multinational financial services corporation specializing in retail brokerage. It is the wealth & asset management division of Morgan Stanley. On January 13, 2009, Morgan Stanley and Citigroup announced that Citigroup would sell 51% of Smith Barney to Morgan Stanley, creating Morgan Stanley Smith Barney, which was formerly a division of Citi Global Wealth Management. The combined brokerage house has 17,646 financial advisors and manages $2 trillion in client assets. Clients range from individual investors to small- and mid-sized businesses, as well as large corporations, non-profit organizations and family foundations.

In 1975, Smith Barney merged with Harris, Upham & Co. to form Smith Barney, Harris Upham & Co., which, in 1977, was placed under SBHU Holdings, a holding company. In 1982, SBHU Holdings was renamed Smith Barney Inc. During the 1980s, the company was known for its television commercials featuring actor John Houseman, with the catchphrase, "They make money the old-fashioned way. They earn it." After Houseman stepped down, the campaign continued with various actors, such as, Leo McKern, Joel Higgins and George C. Scott.

In the late 1980s, the retail brokerage firm Smith Barney was owned by Sanford I. Weill's Primerica Corporation. Commercial Credit purchased Primerica in 1988, for $1.5 billion ($3,242,684,299 today). In 1992, they paid $722 million ($1,315,419,967 today) to buy a 27% share of Travelers Insurance and in 1993 acquired Shearson (which included the legacy business of E.F. Hutton from American Express. By the end of 1993, the merged company was known as Travelers Group Inc. although the brokerage business continued to operate under the Smith Barney brand.

In 1993, Weill bought stockbroker Shearson back from American Express for $1 billion ($1,769,868,694 today), and merged it into Smith Barney. Weill offered Joe Plumeri the presidency of Smith Barney, and he became the President of the merged company that year. He only lasted a year, as he experienced conflicts with existing Smith Barney managers.

In September 1997, Travelers acquired Salomon Inc. (parent company of Salomon Brothers Inc.), for over $9 billion ($14,333,955,224 today) in stock, and merged it with its own investment arm to create Salomon Smith Barney. In April 1998 Travelers Group announced an agreement to undertake a $76 billion ($119,213,556,554 today) merger between Travelers and Citicorp, creating Citigroup, which at the time of the merger was the largest single financial services company in the world.

On June 1, 2009, Morgan Stanley and Citigroup Inc. announced they closed early on the launch of their joint venture that combines Morgan Stanley's wealth management unit (including many former Dean Witter assets) with Citi's Smith Barney brokerage division. The new venture, called Morgan Stanley Smith Barney, was supposed to launch during the third quarter. The combined entity generates about $14 billion in net revenue, has 18,500 financial advisers, 1,000 locations worldwide and serves about 6.8 million households.

Citigroup disclosed on September 17, 2009, they would sell their remaining shares in the group to partner Morgan Stanley.