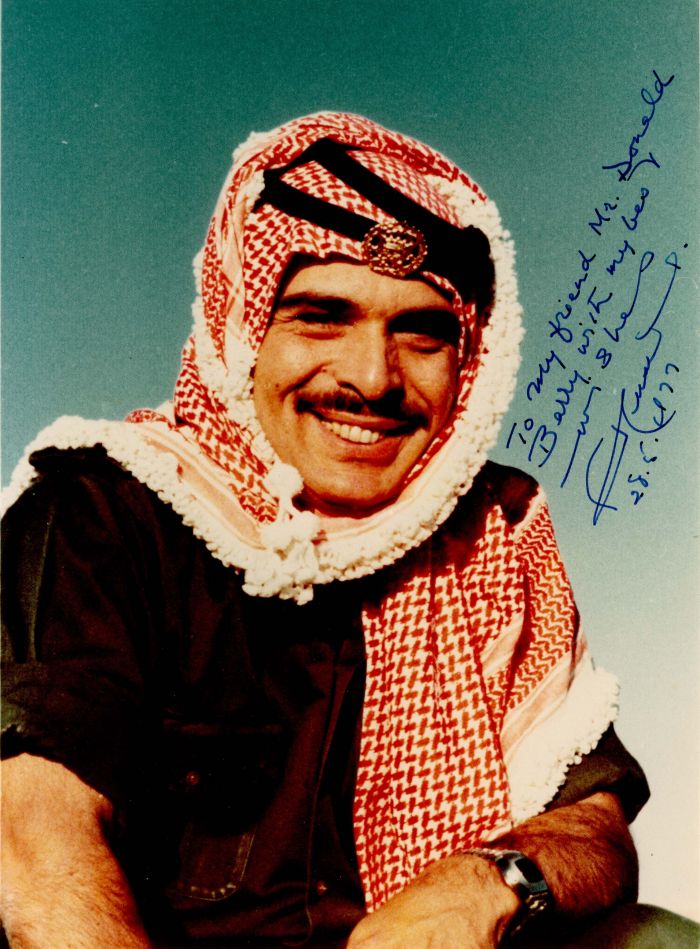 Portrait signed by King Hussein of Jordan and the envelope it was sent in to California.

Hussein bin Talal (Arabic: الحسين بن طلال‎, Al-Ḥusayn ibn Ṭalāl; 14 November 1935  7 February 1999) reigned as King of Jordan from 11 August 1952 until his death. According to Hussein, he was a 40th-generation direct descendant of Muhammad as he belonged to the Hashemite family which has ruled Jordan since 1921. Hussein was born in Amman as the eldest child of Talal bin Abdullah and Zein Al-Sharaf. Hussein began his schooling in Amman, continuing his education abroad. After Talal became King of Jordan in 1951, Hussein was named heir apparent. The Parliament forced Talal to abdicate a year later due to his illness, and a regency council was appointed until Hussein came of age. He was enthroned at the age of 17 on 2 May 1953. Hussein was married four separate times and fathered eleven children: Princess Alia from Dina bint Abdul-Hamid; Abdullah II, Prince Faisal, Princess Aisha, and Princess Zein from Antoinette Gardiner; Princess Haya and Prince Ali from Alia Touqan; Prince Hamzah, Prince Hashim, Princess Iman, and Princess Raiyah from Lisa Halaby. Hussein, a constitutional monarch, started his rule with what was termed a "liberal experiment," allowing, in 1956, the formation of the only democratically elected government in Jordan's history. A few months into the experiment, he forced that government to resign, declaring martial law and banning political parties. Jordan fought three wars with Israel under Hussein, including the 1967 Six-Day War, which ended in Jordan's loss of the West Bank. In 1970 Hussein expelled Palestinian fighters (fedayeen) from Jordan after they had threatened the country's security in what became known as Black September. The King renounced Jordan's ties to the West Bank in 1988 after the Palestine Liberation Organization was recognized internationally as the sole representative of the Palestinians. He lifted martial law and reintroduced elections in 1989 when riots over price hikes spread in southern Jordan. In 1994 he became the second Arab head of state to sign a peace treaty with Israel. At the time of Hussein's accession in 1953, Jordan was a young nation and controlled the West Bank. The country had few natural resources, and a large Palestinian refugee population as a result of the 1948 ArabIsraeli War. Hussein led his country through four turbulent decades of the ArabIsraeli conflict and the Cold War, successfully balancing pressures from Arab nationalists, the Soviet Union, Western countries, and Israel, transforming Jordan by the end of his 46-year reign to a stable modern state. After 1967 he increasingly engaged in efforts to solve the Palestinian problem. He acted as a conciliatory intermediate between various Middle Eastern rivals, and came to be seen as the region's peacemaker. He was revered for pardoning political dissidents and opponents, and giving them senior posts in the government. Hussein, who survived dozens of assassination attempts and plots to overthrow him, was the region's longest-reigning leader. The King died at the age of 63 from cancer on 7 February 1999. His funeral was the largest gathering of world leaders since 1995. He was succeeded by his eldest son, Abdullah II.