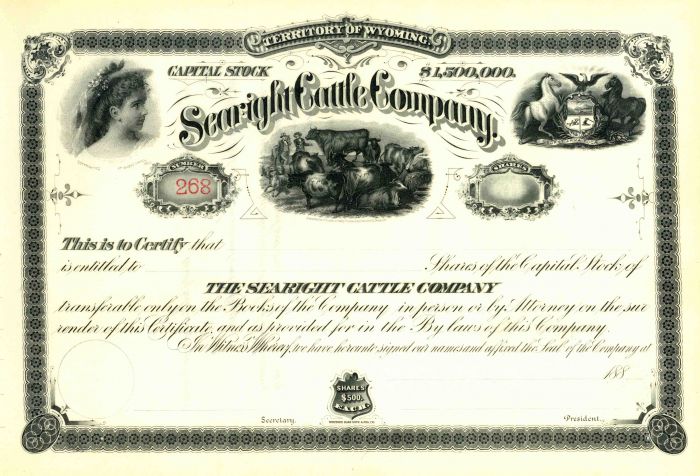 Gilbert A. Searight came from the area of Lancaster, Pennsylvania, to Burnet County, Texas, about 1859 and acquired through the courts land left by an uncle, Peter Kerr, to the county for the building of a school. Searight operated a ranch there before and after the Civil War. In 1876, he began his first cattle business, Searight and Orr, with Hugh N. Orr, in Laramie County, Wyoming Territory. In 1883, Searight Cattle Company was formed with his brother, George P. Searight, in the same place. With W. S. Carothers, a cousin, and other family members, he formed Dolores Land and Cattle Company with land holdings in Dimmit, Zavala, and Kinney counties of Texas covering more than 200 acres. (Utexas.edu)

The Territory of Wyoming was an organized incorporated territory of the United States that existed from July 25, 1868, until July 10, 1890, when it was admitted to the Union as the State of Wyoming. Cheyenne was the territorial capital. The boundaries of the Wyoming Territory were identical to those of the modern State of Wyoming.

Because of Wyoming's location as part of the Louisiana Purchase, the Oregon Country, and the Mexican Cession, the land which became Wyoming has a complicated history of territorial relationships. Portions of the territory, which eventually fell under Wyoming's jurisdiction, were at various points associated with the territories of Washington, Oregon, Idaho, Dakota, Nebraska, and Utah, and had previously belonged to the independent states of Great Britain, France, Spain, Mexico, and Texas.

The portion of the Wyoming Territory west of the continental divide and north of the 42nd parallel was originally part of the Oregon Country, which was organized into the Oregon Territory in 1848; when Oregon entered the union as a state under its present boundaries in 1859, this land became part of the Washington Territory (although its eastern part had been granted to the Nebraska Territory in 1854. The Idaho Territory subsumed this land as well, in 1863.

The southwestern corner of what became the Wyoming Territory, south of the 42nd parallel, became part of the United States with the 1848 Mexican Cession. An eastern section of this was once claimed by the Republic of Texas. In 1851, the portion of this land west of the continental divide was made part of the Utah Territory, and, with the organization of the Colorado Territory in 1861, most of it was transferred to the Nebraska Territory and subsumed into the Idaho Territory, in 1863. A small corner of Wyoming remained part of Utah until the creation of the Wyoming Territory, in 1868.

Native Americans lived in the region for centuries. On July 25, 1868, President Andrew Johnson signed the Wyoming Organic Act creating the Wyoming Territory using lands from the Dakota, Idaho, and Utah territories, and on April 17, 1869, the territorial government was organized. In 1869 the territory granted women's suffrage for all elections in an attempt to attract new settlers. A later attempt to repeal the law was defeated after the governor vetoed the repeal; the legislature failed to override the veto by one vote.

In 1872, Wyoming Territory had five counties: Albany, Carbon, Laramie, Sweetwater, and Uinta, each a tall narrow rectangle comprising approximately one-fifth of the territory.

Item ordered may not be exact piece shown. All original and authentic.
Email this to a friend
Request Info
Previous Item (El Carmen Grazing Co.)    (California Cattle and Land Co. - $100) Next Item