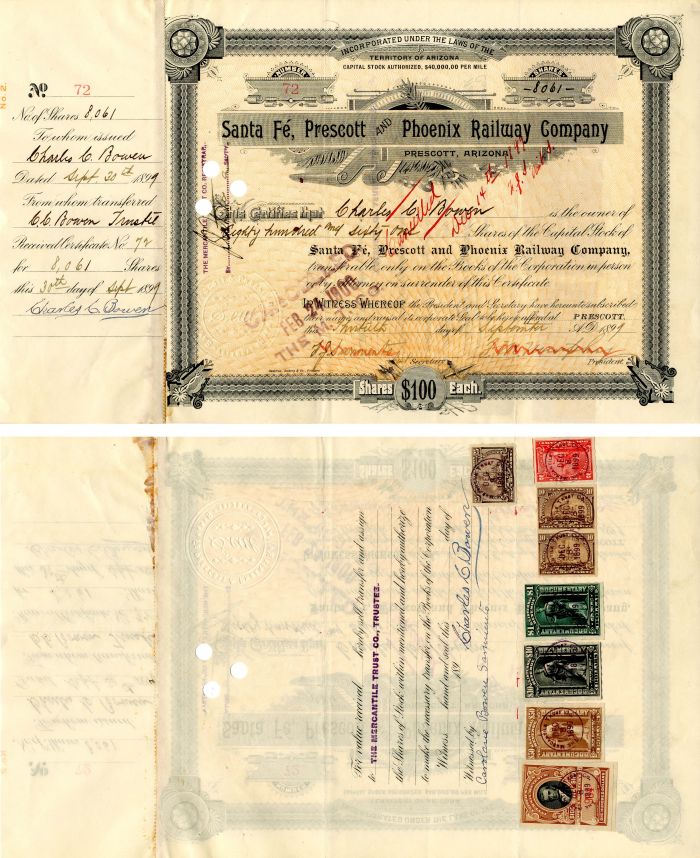 The Santa Fe, Prescott and Phoenix Railway (SFP&P) was a common carrier railroad that later became an operating subsidiary of the Atchison, Topeka and Santa Fe Railway in Arizona. At Ash Fork, Arizona, the SFP&P connected with Santa Fe's operating subsidiary, the Atlantic & Pacific Railroad mainline, that ran from California to Chicago. The SFP&P's 195-mile (314 km) line extended the Santa Fe Railway south into Phoenix. The SFP&P extended another 100 miles (160 km) to the east from Phoenix to Florence and Winkelman via the Phoenix and Eastern Railroad (which would become a Southern Pacific Railroad subsidiary in 1907). The SFP&P also served several mines in the Prescott area through its various subsidiary railroads.

On December 28, 1911, the line was merged into Atchison, Topeka and Santa Fe Railway's non-operating subsidiary (paper railroad) of the California, Arizona and Santa Fe Railway. Today the line from Ash Fork to Phoenix is operated by the BNSF Railway. Due to its many winding curves and bridges, the route was popularly known as the Peavine. In the 1960s, the AT&SF built a new line to avoid the worst grades and curves, bypassing the city of Prescott, called the New Peavine Bypass.

On June 30, 1899, the SFP&P began operating the Prescott and Eastern Railroad that ran between Entro (near Prescott) to Mayer. In 190102 the SFP&P also operated its subsidiary the Bradshaw Mountain Railroad.

On November 1, 1905, the SFP&P began operating the Arizona & California Railway that ran from a connection with the Santa Fe Railway in the Mojave Desert at Cadiz, California, to a connection with SFP&P at Matthie, Arizona, (located between Prescott and Wickenburg). By the end of 1909 the Arizona & California was an operating subsidiary of the SFP&P, using 3 4-6-0 locomotives made by Brooks Locomotive Works.

The SFP&P also had six Brooks Locomotive Works 2-8-0 (also known as a Consolidation) steam locomotives built between 19041906. These locomotives would be renumbered ATSF #2439-2444.