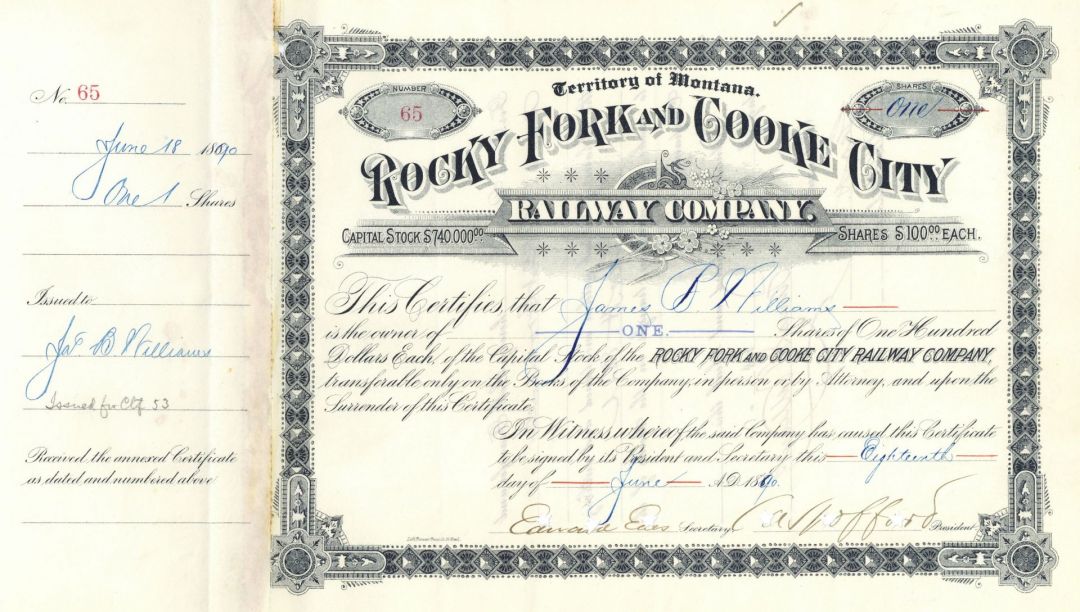 The Rocky Fork and Cooke City Railway started operations in 1886 and stopped service in 1898 for a total period of operations of 12 years. After the Civil War railroads exploded in the US with hundreds of lines starting service all over the country. This was the the age of steam locomotives and rail travel was still a luxury. Rocky Fork and Cooke City Railway items from this time period can be very valuable and items of most types that predate 1900 will be valuable if they are in good condition.

Many collectors are looking for antique railroadiana that dates before 1900 so there is a strong market for anyone looking to sell. Rocky Fork and Cooke City Railway only operated in 1 state which is indicative of smaller lines, or in some cases lines in larger states. Many one state railroads are short line railroads that didn't have large areas of coverage or large promotional budgets so items from them are likely to be somewhat rare and could be worth more if the railroad didn't exist for long or if it didn't produce many collectible items. Rocky Fork and Cooke City Railway Operated Routes in the Following States: Montana.

The Northern Pacific Railway (reporting mark NP) was a transcontinental railroad that operated across the northern tier of the western United States, from Minnesota to the Pacific Northwest. It was approved by Congress in 1864 and given nearly forty million acres (62,000 sq mi; 160,000 km2) of land grants, which it used to raise money in Europe for construction.

Construction began in 1870 and the main line opened all the way from the Great Lakes to the Pacific when former President Ulysses S. Grant drove in the final "golden spike" in western Montana on September 8, 1883. The railroad had about 6,800 miles (10,900 km) of track and served a large area, including extensive trackage in the states of Idaho, Minnesota, Montana, North Dakota, Oregon, Washington, and Wisconsin. In addition, the NP had an international branch to Winnipeg, Manitoba, Canada. The main activities were shipping wheat and other farm products, cattle, timber, and minerals; bringing in consumer goods, transporting passengers; and selling land.

The Northern Pacific was headquartered in Minnesota, first in Brainerd, then in Saint Paul. It had a tumultuous financial history; the NP merged with other lines in 1970 to form the Burlington Northern Railroad, which in turn merged with the Santa Fe Railway to become the BNSF Railway in 1996.