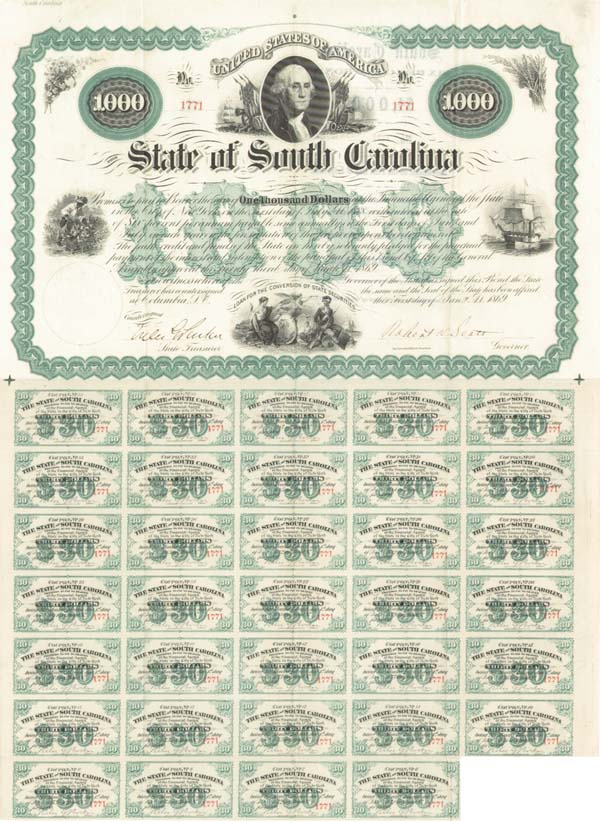 Robert Kingston Scott, (1826-1900). Union Soldier and Governor of South Carolina. During the Civil War he received honorable mention for gallantry in action and commanded a brigade in Sherman's march to the sea. Later promoted to Brigadier General and at the end of the war was brevetted a Major General. Beautiful uncanceled Bond dated 1869 with several rows of coupons. Truly exceptional! Superb in Many Ways!!!

Robert Kingston Scott (July 8, 1826  August 12, 1900) was an American Republican politician, the 74th Governor of South Carolina, and an officer in the Union Army during the American Civil War. In 1891 he built a Queen Anne Italianate Victorian home in Napoleon, Ohio and lived there until his death in 1900. It still stands to this day in Napoleon on the corner of W. Clinton Street and Haley Ave.

Robert K. Scott was born in Armstrong County, Pennsylvania, to a military family. His grandfather fought in the American Revolution and his father in the War of 1812. Scott studied medicine and began practice in Henry County, Ohio.

In October 1861, Scott became lieutenant colonel of the 68th Ohio Infantry, and colonel of that regiment in 1862. He served in Tennessee, where he commanded the advance of Major General John A. Logan's division on the march into Mississippi. He was engaged at Port Gibson, Raymond, and Champion Hill.

He was afterward at the head of a brigade in the XVII Corps, and was taken prisoner near Atlanta. There are conflicting claims about how he gained freedom. Some claim he was part of a prisoner exchange on September 24, 1864 and was put into Sherman's operations before that city and in the march to the sea, while records also indicate that he escaped by jumping from a prisoner train.

Scott was commissioned as a brigadier general of volunteers on January 12, 1865, and also received the brevet ranks of brigadier and major general in the volunteer army, to date from January 26, and December 2, 1865, respectively.

Between 186568, General Scott was assistant commissioner of the South Carolina Bureau of Refugees, Freedmen and Abandoned Lands, popularly known as the Freedmen's Bureau. In July 1868, he resigned from the Regular Army and entered politics.

Later that year, he became the first governor of the reconstructed South Carolina as a Republican. In 1870, the South Carolina Constitution of 1868 lifted the rule that had until then prevented a governor's re-election until four years had passed since leaving office. This allowed Scott to become the first governor of South Carolina to be elected to two consecutive terms. He was re-elected by a majority of 33,534 votes of a total 136,608. One of the most notable acts of his state legislature was voting itself a full-time saloon and restaurant at taxpayer expense. The state debt tripled during Governor Scott's years in office, resulting in an unsuccessful attempt by the General Assembly to impeach him in 1871.

Judge Richard B. Carpenter testified in an 1872 congressional hearing that voter fraud was involved in Scott's re-election, but Scott remained in office. Ironically, Carpenter not only owed him money at the time, but also continued to ask for more with the promise of political favors in return.

Franklin J. Moses, Jr., the first governor after him, claimed Scott "fraudulently signed state bonds in the St James Hotel in New York under the joint influence of alcohol and burlesque queen Pauline Markham," known as one of "The British Blondes." He also regularly borrowed money from Scott.

Wade Hampton III, the third governor after Scott, indicted him for "fraudulently issuing three warrants for $48,645 to non-existent payees in 1871." At the same time, he sent letters to Scott promising not to extradite him nor force him to stand trial.

In 1877 Scott returned to Napoleon, Ohio, when Democrats returned to power in the South Carolina executive, possibly out of fear of being prosecuted for misuse of funds during his administration.

He settled down with his family, including his only son, R.K. Scott, Jr., who was known as "Arkie" because of his initials. On Christmas Day, 1880, 15-year-old Arkie went missing. He was "inclined to frequent taverns." Scott suspected he was hiding in the apartment of his friend Warren G. Drury, aged 23. When Drury refused to let him in he was somehow mysteriously shot by a bullet from Scott's pistol and died the next day.

Scott's trial, held in a pool hall over Wendt's Shoe Store in downtown Napoleon, consumed national attention. The former governor, a two-star general who trained men and led soldiers through four years of war, participating in one of the boldest military campaigns in history, claimed his weapon accidentally discharged. He was also a lawyer, passing the South Carolina bar examination after his term as governor. On November 5, 1881, General Scott was acquitted of murder. The case led to public outrage. After his acquittal, a lynch mob from Toledo wanted to see "rough and ready punishment done." Scott formed a militia from his own employees and volunteers. "The Roughs" boarded the Wabash Railroad bound for Napoleon with an anonymous gift of two barrels of whiskey and all thoughts of justice were washed away.

Scott died in Napoleon and was buried in Henry County, Ohio.

Item ordered may not be exact piece shown. All original and authentic.
OUT OF STOCK
Request re-stock notice?
Email this to a friend
Request Info
Previous Item (Morris and Essex Railroad Co. - Proposal and Order)    (Odd-Fellows Hall Assn of Allentown) Next Item