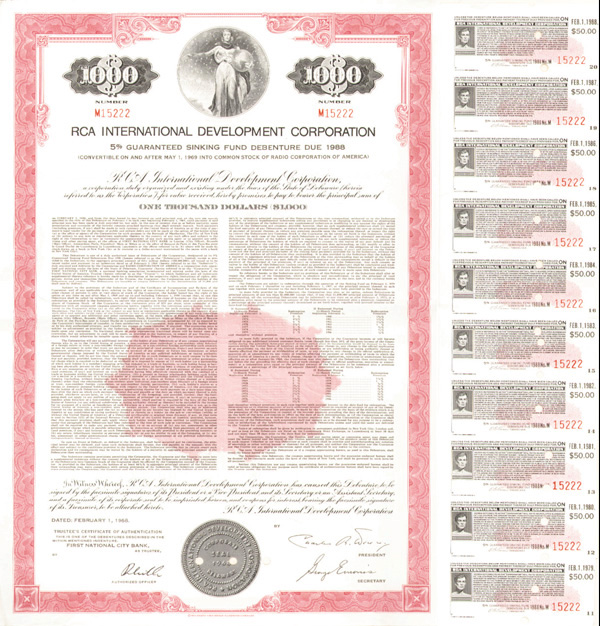 Years: 1968
Color: Pink
$1,000 Bond. Modern female figure holding a globe. Security-Columbian Banknote Co. The RCA Corporation was a major American electronics company, which was founded as the Radio Corporation of America in 1919. It was initially a wholly owned subsidiary of General Electric (GE); however, in 1932, RCA became an independent company after GE was required to divest its ownership as part of the settlement of a government antitrust suit. An innovative and progressive company, RCA was the dominant electronics and communications firm in the United States for over five decades. RCA was at the forefront of the mushrooming radio industry in the early 1920s, as a major manufacturer of radio receivers, and the exclusive manufacturer of the first superheterodyne models. RCA also created the first nationwide American radio network, the National Broadcasting Company (NBC). The company was also a pioneer in the introduction and development of television, both black-and-white and especially, color television. During this period, RCA was closely identified with the leadership of David Sarnoff. He was general manager at the company's founding, became president in 1930, and remained active, as chairman of the board, until the end of 1969. During the 1970s, RCA's seemingly impregnable stature began to weaken as it attempted to expand into a diversified multinational conglomerate. The company suffered enormous financial losses in the mainframe computer industry and other failed projects such as the CED videodisc. Though the company rebounded by the mid 1980s, RCA was reacquired by General Electric in 1986, which over the next few years liquidated most of the corporation's assets. Today, RCA exists as a brand name only; the various RCA trademarks are currently owned by Sony Music Entertainment and Technicolor, which in turn license the brand name to several other companies including Voxx International, Curtis International, AVC Multimedia, TCL Corporation, and Express LUCK International, Ltd. for their various products.

Item ordered may not be exact piece shown. All original and authentic.
Email this to a friend
Request Info
Previous Item (Port of New York Authority - Bond)    (Shell Oil Company - Bond) Next Item