Progress Club of the City of New York Bond (Uncanceled) 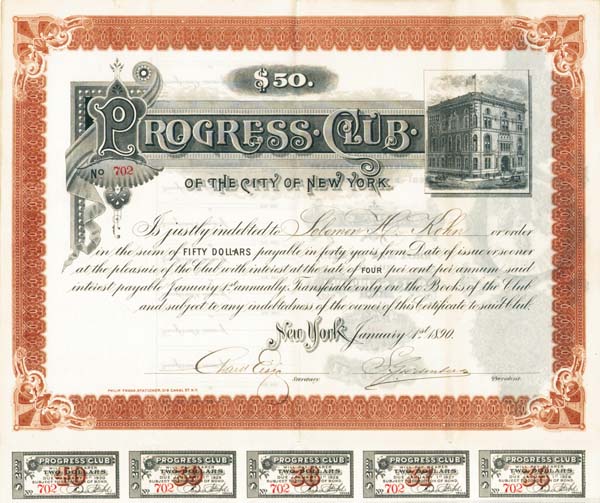 820 Fifth Avenue is a luxury cooperative located at the northeast corner of Fifth Avenue and East 63rd Street on the Upper East Side of Manhattan, New York City, United States.

The 12 story limestone-clad neo-Italian Renaissance palazzo is one of the most expensive and exclusive apartment houses in the city. It was designed by Starrett & van Vleck and built by Fred T. Ley in 1916. The land upon which it was built was previously occupied by the Progress Club. The frontage was 100.5 feet (30.6 m) on Fifth Avenue and 100 feet (30 m) on 63rd Street. Construction cost was $1 million, exclusive of the land (which cost another million).

The building comprises 12 apartments. There are ten apartments that are full-floor. These apartments are lavish in scale, each containing roughly 6,500 square feet (600 m2). The lower two floors consist of two duplex maisonettes, one 7000 SF, the other 4,500 square feet (420 m2). There is also a superintendent's apartment on the first floor, roughly 750 SF. All apartments feature marble floors, and fireplaces in all major rooms. The outer walls are two and a half feet thick and ceiling height is 11 feet (3.35m). The public rooms all face Central Park, and are accessed via the 44-foot-long gallery. The five bedrooms found in each apartment all have windows on 63rd Street and the numerous (usually seven) (7) servants rooms are in the back.

The facade is broken into five sections by four string courses and the centers of the east and south facades feature balustraded balconies.

Originally a rental, 820 Fifth Avenue was converted into a cooperative in 1949. There are 2 duplex maisonette apartments on the first and second floors, and 10 full-floor apartments on each of floors 3 through 12. Potential buyers must pay entirely in cash. No mortgage financing is allowed. The cooperative board requires potential buyers to possess liquid assets ten times the value of the apartment that they wish to purchase.

The building features a lounge for chauffeurs on the ground floor and a private, gated, holding area in back for cars. Other features include sidewalk landscaping, including Magnolia trees, and a canopied entrance flanked by bronze lanterns.

Each of the ten full-floor apartments has three private elevators which open directly into the apartment; A regular passenger elevator, a "party" elevator for moving groups of guests in and out quickly, and a larger cargo "service" elevator that opens into the Servants Hall. The service elevator is for moving furniture, luggage, package and flower deliveries, groceries and catering supplies, and for domestic servants, who are not permitted to use the regular passenger elevator.

820 Fifth Avenue is notorious for rejecting even very wealthy prospective buyers, including some billionaires.

These apartments rarely change hands and when they do, typically command prices above $40 million.

These include both current and former residents:

Item ordered may not be exact piece shown. All original and authentic.
Email this to a friend
Request Info
Previous Item (Manufacturers' Club of Philadelphia - Bond (Uncanceled))    (Virginia Agricultural and Mechanical Society - Stock Certificate) Next Item