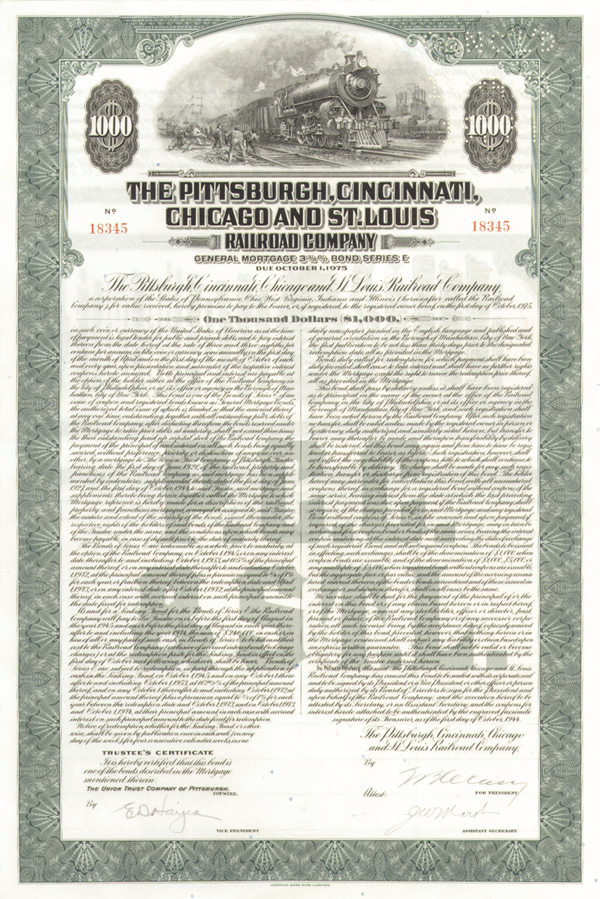 The Pittsburgh, Cincinnati, Chicago and St. Louis Railroad, commonly called the Pan Handle Route (Panhandle Route in later days), was a railroad that was part of the Pennsylvania Railroad system. Its common name came from its main line, which began at Pittsburgh, Pennsylvania, crossed the Northern Panhandle of West Virginia, and continued west to Bradford, Ohio, where it split into a northern line to Chicago and a southern one through Indianapolis, Indiana, to East St. Louis, Illinois.

On December 25, 1854, the S&I came to an agreement with the Central Ohio Railroad to use its tracks from Newark west to Columbus. Some surveying had been done for a separate route via Granville. The connection at Newark opened April 16, 1857, and was built with funds provided by the Columbus and Xenia Railroad, which helped provide a through route to Cincinnati from the S&I. In 1864, the S&I outright bought a half interest in the Newark-Columbus track.

On July 22, 1853, the president of the S&I deeded right-of-way he had bought from 36 landowners across the Virginia Panhandle to the P&S. This allowed the railroad to build without a charter, which was required to use eminent domain; the powerful city of Wheeling had opposed the P&S, which bypassed Wheeling. The private Edgington and Wells Railroad (named after its owners, Jesse Edgington and Nathaniel Wells of Brooke County) opened July 4, 1854, but failed later that year, as it did not connect to any other railroads. The Holliday's Cove Rail Road was chartered by the Western Transportation Company on March 30, 1860, in Virginia to build across the Panhandle near what is now Weirton, West Virginia; the charter was only used to build the Steubenville Railroad Bridge. The next day the Wheeling Railroad Bridge Company was chartered by the same company, as a political promise to allow the incorporation of the HCRR.

The full P&S opened October 9, 1865, from Smithfield Street in Pittsburgh west to Wheeling Junction at the east end of the Steubenville Railroad Bridge. That same day, the Steubenville Railroad Bridge opened over the Ohio River, connecting the S&I and P&S, as did the connection at Pittsburgh, connecting the Pennsylvania Railroad with the P&S via the Monongahela River Bridge (commonly called the Panhandle Bridge) and Grant's Hill Tunnel. From then until 1868, the line was operated as the Pittsburgh, Columbus and Cincinnati Railroad by the Western Transportation Company.

The P&S was sold under foreclosure on November 6, 1867, to the Panhandle Railway, which had been chartered April 8, 1861. On April 30, 1868, the PHRy, S&I and HCRR merged to form the Pittsburgh, Cincinnati and St. Louis Railway, and the Western Transportation Company was dissolved soon after.

The Terre Haute and Richmond Rail Road was chartered in 1847 to build across Indiana via Indianapolis. On May 25, 1850, stockholders east of Indianapolis organized the Terre Haute and Richmond Railroad (East of Indianapolis). On January 20, 1851, that section, from Indianapolis east to the Ohio state line, was renamed the Indiana Central Railway. On January 31, an Ohio law authorized the Dayton and Western Railroad to unite with the Indiana Central and operate jointly. The line from Indianapolis east to Greenfield opened in September 1853, and on October 8 it was completed to the state line, where it connected with the Dayton and Western. Joint operation of both lines between Indianapolis and Dayton, Ohio began August 1, 1854. In 1859 the rail gauge was changed from standard gauge to the broader Ohio gauge (4 ft 10 in or 1,473 mm) to allow for direct connections with the Little Miami Railroad and Columbus and Xenia Railroad at Dayton.

The Columbus, Piqua and Indiana Railroad was chartered in Ohio on February 23, 1849, to build from Columbus west via Urbana, Piqua and Greenville to the Indiana state line. On March 21, 1851, the CP&I was authorized to change the route west of Covington, and a more northerly alignment was chosen to meet the Indianapolis and Bellefontaine Railroad at Union City, Indiana for access to Indianapolis. The first section, from Columbus west to Plain City, opened June 6, 1853. Extensions opened to Urbana September 19 and Piqua October 16, 1854; on the latter date it changed its track gauge to Ohio gauge (4 ft 10 in or 1,473 mm) to connect with the Indianapolis and Bellefontaine, which had also re-gauged. The rest of the line to Union City opened March 25, 1859, after some financial problems. The CP&I was sold at foreclosure on August 6, 1863, and reorganized October 30 as the Columbus and Indianapolis Railroad.

The New Castle and Richmond Railroad was chartered February 16, 1848, in Indiana to build a line from New Castle east via Hagerstown and Greens Fork to Richmond. The company was authorized on January 24, 1851, to extend northwest beyond New Castle to Lafayette. On February 26, 1853, it was renamed the Cincinnati, Logansport and Chicago Railway to better reflect its expanded role. The original line opened between New Castle and Richmond in December 1853, and it was operated jointly with the Richmond and Miami Railroad and Eaton and Hamilton Railroad, which continued the line southwest to Hamilton, Ohio. The Cincinnati, Hamilton and Dayton Railroad, connecting Hamilton to Cincinnati, joined the operations on February 1, 1854.

On September 25, 1857, the Chicago and Cincinnati Railroad was chartered in Indiana to build a line from Logansport northwest to Valparaiso. That line opened in 1861, connecting at Valparaiso with the Pittsburgh, Fort Wayne and Chicago Railway to Chicago. The Cincinnati and Chicago AirLine opened a bridge over the Wabash River at Logansport on September 25, 1861, connecting it to the Chicago and Cincinnati. Joint operation between Richmond and Chicago began July 1, 1862 and ended January 29, 1865.

The Galena and Illinois River Railroad was chartered in Illinois on February 18, 1857, to build from Galena through Chicago to the Indiana state line towards Lansing, Michigan. The Chicago and Great Eastern Railway was incorporated in Indiana on June 19, 1863, to build from Logansport northwest to the Illinois state line towards Chicago. The charter of the G&IR was assigned to the C&GE on September 11, 1863, and the C&GE absorbed the G&IR on October 30. The line from Chicago (12th Street) south and southeast to the Chicago and Cincinnati at La Crosse, Indiana opened March 6, 1865, and the old line northwest from La Crosse to Valparaiso was abandoned. On May 15, 1865, the C&GE absorbed the Cincinnati and Chicago AirLine Railroad and Chicago and Cincinnati Railroad.

On February 12, 1868, the Columbus, Chicago and Indiana Central Railway was formed as a merger of the Columbus and Indiana Central Railway and Chicago and Great Eastern Railway. The rest of the new main line, from Marion northwest to Anoka, on the old main line east of Logansport, was completed March 15, 1868, making the old route via New Castle and Richmond into a branch. The CC&IC now had main lines from Columbus, Ohio to Chicago and Indianapolis, Indiana, with branches from near Logansport, Indiana southeast to Richmond, Indiana (on the Indianapolis line) and west to Effner, Indiana. The Erie Railway offered in late 1868 to lease the CC&IC, but the Pittsburgh, Cincinnati and St. Louis Railway made a better offer on January 22, 1869, leasing it on February 1.

On December 1, 1869 (retroactive from February 23, 1870) the Pittsburgh, Cincinnati and St. Louis Railway leased the Little Miami Railroad. This included the Columbus and Xenia Railroad, Dayton and Western Railroad and Dayton, Xenia and Belpre Railroad, as well as the Richmond and Miami Railway's branch west to Richmond, Indiana. With that lease, the Pennsylvania Railroad acquired access to Cincinnati.

The Columbus, Chicago and Indiana Central Railway went bankrupt and was sold at foreclosure on January 10, 1883. The Chicago, St. Louis and Pittsburgh Railroad was incorporated in Indiana on March 14 and Illinois on March 15, and the former CC&IC was conveyed to the two companies on March 17. Operation by the PC&StL continued until April 1, 1883. On April 1, 1884, the two companies merged to form one Chicago, St. Louis and Pittsburgh Railroad. That company was merged with the PC&StL, Cincinnati and Richmond Railroad and Jeffersonville, Madison and Indianapolis Railroad on September 30, 1890, to form the Pittsburgh, Cincinnati, Chicago and St. Louis Railway (PCC&StL).

The PCC&StL was leased by the PRR on January 1, 1921, and finally was merged into the PRR's Philadelphia, Baltimore and Washington Railroad on April 2, 1956.

In October of 1991, legislation passed by the US Government recognized the Panhandle Line from Pittsburgh to Weirton as a secondary main line. Although the line was very busy at the time, the US Government required Conrail to abandon the line between Pittsburgh and Weirton. The line was abandoned later that month, and Burgettstown to Weirton was lifted in December. Walkers Mill to Burgettstown remained until 2000, and the Panhandle Trail Construction began during 2000. Walkers Mill to Weirton was left in place, and was sold to RailTex in 1994, then the P&OC in 2000. It was operated by the P&OC until early 2014. As of March 2018, the line is very overgrown with everything west of Carnegie having been severed from the rest of the P&OC, and thereby inaccessible. Soon, this line will likely be removed and become part of the trail, sealing the fate of the Panhandle line.

Sections of the route have been adapted for other uses. The easternmost section, from the Pittsburgh Union Station through the Panhandle Tunnel and over the Panhandle Bridge to Station Square in Pittsburgh, is part of the Pittsburgh Light Rail system. From there to the Sheraden neighborhood of Pittsburgh, the railway forms part of Norfolk Southern's Mon Line. The portion from Sheraden to Carnegie, Pennsylvania has been converted into the West Busway, a bus-only roadway. The section from Carnegie to Walkers Mill, Pennsylvania, retains its rails and is owned by the Pittsburgh and Ohio Central Railroad, however, it has not seen a train since early 2014, and it will likely be removed to become part of the Panhandle Trail. The section from Walkers Mill to Weirton, West Virginia, has been made into the Panhandle Trail, a bicycling/walking trail. From the trail's end in Weirton to Columbus, the rails are still in place: from Weirton to Mingo Junction, the route is part of various rail lines and spurs, and from Mingo Junction to Columbus, the line forms part of the Columbus and Ohio River Railroad.